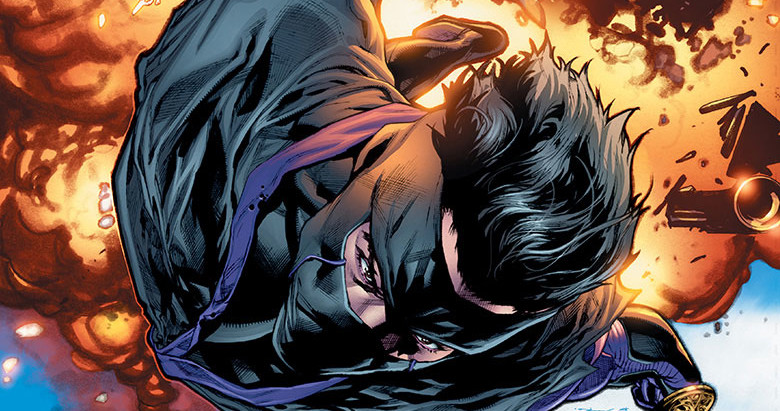 NINJAK #27 is a straightforward and self-contained spy-caper that embodies everything great about the Ninjak character. This issue has spying, jet-setting, and snake ninjas. There isn’t much more a Ninjak fan could ask for. Kevin Maurer’s storytelling is tight and exciting, while CAFU’s and David Baron’s art is lively and action-packed.

Valiant star Ninjak continues his adventures as ninja superhero and billionaire playboy. In this issue, Ninjak is assigned to extract a missing scientist from a compound in the Middle East. The mission seems straightforward at first, but our hero later finds himself tussling with dangerous Snake-Ninja spies. From there, NINJAK #27 is an all-out brawl between ninjas.

The story in this issue is typical spy fare and follows the general James Bond structure. First, Ninjak gets his mission to defeat villains in an exotic location. Second, he easily infiltrates the enemy compound. Third, he meets unexpected and dangerous enemies and must confront them. The story is somewhat predictable, but its simplicity allows more room for action and character. Maurer does a great job of incorporating Ninjak’s cocky and suave demeanor throughout the issue. His MI-6 superspy personality shines through his outward ninja appearance.

The two snake ninja villains are sufficiently menacing. While the concept is just cool on its face, Maurer does a great job of giving them more depth beyond their badass looks. The two adversaries are fighting for their lives against the experimental procedures that have mutated them. Superspy characters are no stranger to snake-themed villains (Captain America’s Serpent Society immediately came to mind), but Maurer does a great job of really leaning into the ninja aspect of the characters.  Also, the fact that their snake tongues stick out of their ninja masks is a very cool touch. If you like Reptile from Mortal Kombat, you will love the villains in  NINJAK #27. Hopefully, this gruesome twosome will continue to pester Ninjak in future issues.

Read: The Opening Scene of BORUTO: NARUTO: NEXT GENERATIONS Shows Off a Bleak Future for the Series

There is no shortage of ninja violence in NINJAK #27. Very few characters make it through the issue without getting stabbed, sliced, or throwing starred. The art is dynamic and utilizes all the hallmarks of great comic book action. This issue features dynamic posing, swooping movement lines, and exaggerated foreshortening.  Outrageous KILL BILL-style sword fighting is the bread and butter of this issue. The action also makes use of each fighter’s strengths. The non-superpowered Ninjak relies on gadgets and stealth, while the Snake Ninjas are savage and sneaky. Like all great comic book action, there is personality behind the punches and kicks.

The Man Behind the Mask

Ninjak is generally a difficult character to draw because he almost completely covers his face. He only shows his eyes, and depending on the pose he can easily obscure them. The art in this issue does a great job of leveraging body language and expressive eyes to convey Ninjak’s emotion. The exaggerated eyes in NINJAK #27 remind me of Tom Hardy’s performance as Bane. The artists clearly made an effort to make the character’s facial expression’s pop.

Despite its conventional spy plot, NINJAK #27 is the type of high-intensity ninja action fans have come to expect. This issue is a no-brainer for anyone who appreciates a good action set piece.