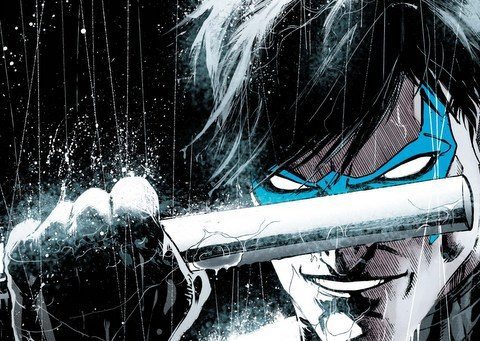 After the defeat of Dr. Daedalus, Dick Grayson finally has his secret identity back. Writer Tim Seeley and artist Yanick Paquette use this issue to bid farewell to Agent 37. In this comic, Dick says goodbye to the friends and colleagues he made while working for Spyral. This issue provided closure for the Agent 37 storyline and heralded the return of Dick Grayson as Nightwing!

READ: Check out our review of TITANS REBIRTH to see Nightwing get reacquainted with Wally West!

The issue opens with Agent 37 fighting the villainous group the Madmen. Then we cut to present day where Dick is back in Gotham enjoying quality time with Damian at an arcade. Dick appears ecstatic to have his secret identity back. Despite his good spirits, Dick feels a bit disheartened. Being able to get his old life back meant leaving his old one behind, including the friends he made. Dick reveals to Damian that his return to Gotham wasn’t just to catch up.  The Parliament of Owls had planted a bomb in Damian’s skull and Dick came to Gotham to remove it. The removal of the bomb is successful. Afterwards, Dick and Batman have a heart to heart. He discloses to Batman that he plans on stopping the Owls, but using the name they tried to take from him – Nightwing!

It should go without saying that Tim Seeley is adept at writing for Dick Grayson. This issue is no exception.  At the start of the issue Dick is in an in-between state. He may have said goodbye to his former friends from his secret agent life, but Dick doesn’t seem ready to go back to being a superhero. It is not until his talk with Batman that he fully embraces his role as Nightwing once again. Before putting on the suit, Dick tells Batman that it doesn’t matter what role he’s in – he’ll always be himself.

I appreciate that Seeley acknowledges that while Dick has had many roles throughout his life – Robin, Nightwing, Batman, and Agent 37 – in each role he is Dick Grayson. That is what I personally love about this character, he doesn’t let the role he’s in change him. Although, in this issue Dick points out his reasoning for returning to the role of Nightwing; it’s his way of showing the Parliament of Owls that they can’t take away the name Nightwing from him. 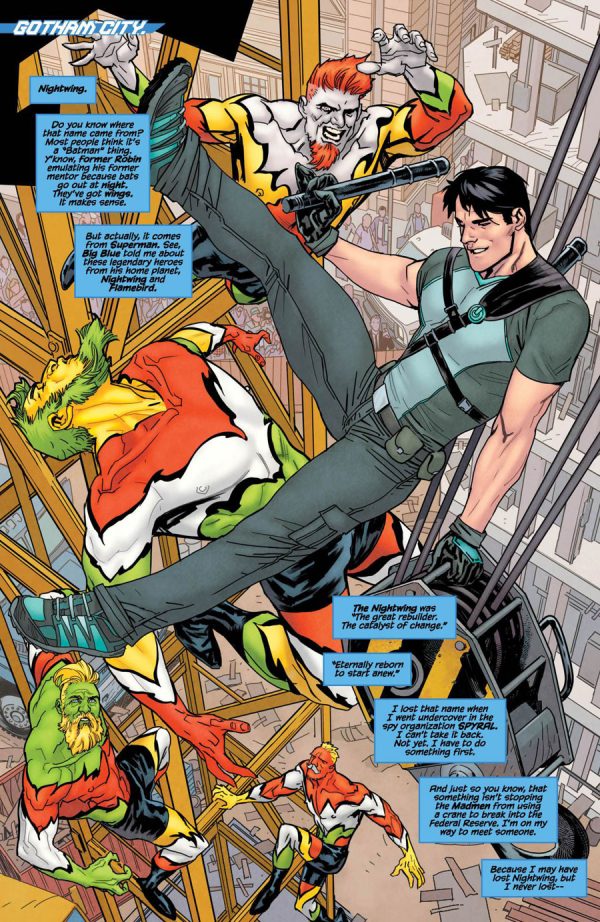 While Seeley has an excellent grasp on what makes Dick Grayson such a compelling character, I feel he missed the mark with Damian. Throughout the issue Damian participates in many typical adolescent activities such as playing video games, enjoying ice cream, and collecting action figures. The thing is Damian is not a typical adolescent. When he was first introduced, Damian was a cold-hearted killer trained by the League of Assassins, so watching Damian behave like a regular kid is a bit surreal for me. I understand that Damian has changed since his re-introduction in BATMAN AND SON (2006), but his character still felt off. 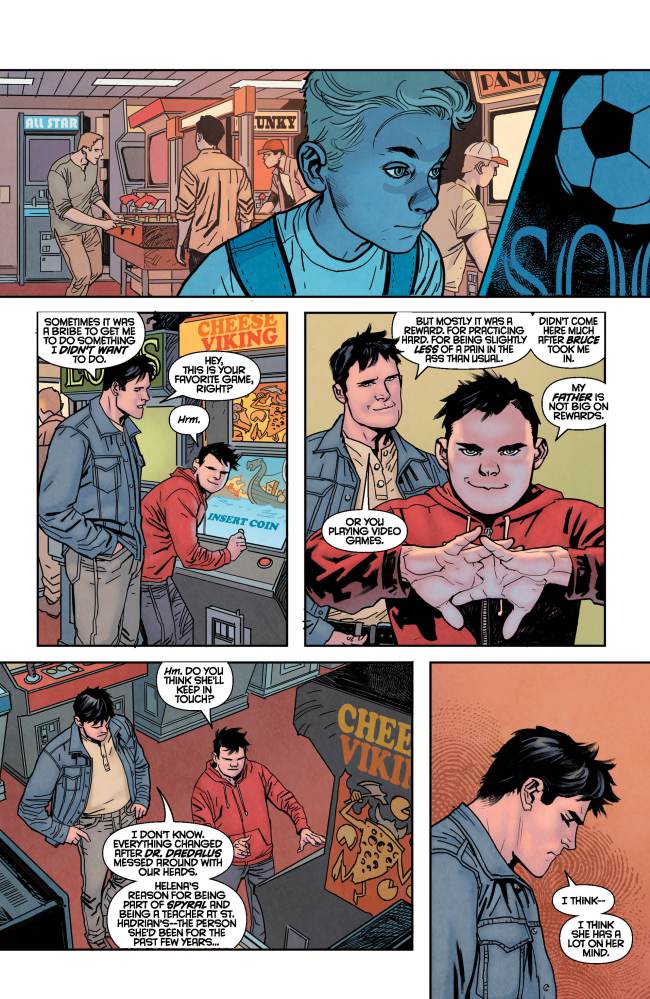 One of Damian’s notable traits is that he’s obnoxious, but in this issue it felt like Seeley was trying too hard with Damian’s dialogue. Another issue I had with Damian was his appearance. Since the events of REBIRTH, Damian is now thirteen, yet the artwork by Yanick Paquette makes him appear older. In certain panels Damian looks like someone in his late teens, but he is about a foot shorter than Dick. This drawing of Damian makes him seem like an extremely short eighteen-year-old. However, the inconsistency of Damian’s appearance with his actual age is really the only gripe I have with the artwork.

As for the artwork in the rest of the issue, it’s excellent in the way it displays character emotions. The disheartened look on Dick’s face as he remembers Helena, his former Spyral partner, truly captures the longing he feels for her. The action scenes may have been brief and only in flashbacks, but they showcased Dick’s impressive acrobatic abilities. The colors in present day were surprisingly bright, considering it took place in Gotham. The bright and vibrant colors represented Dick’s joy at finally being able to return home with his identity a secret once again. The last shot in this issue should make any Nightwing fan rejoice, as Dick steps out in his classic black-and-blue uniform. Nightwing has been reborn!

READ: Check out a story about Dick Grayson as Robin in his battle alongside the Justice League in JUSTICE LEAGUE #51.

The issue was great as the final chapter for Agent 37. I recommend this issue to any fan of the GRAYSON comic as Seeley delivers closure to those who need it. If you’re a Nightwing fan, then this issue may not be for you as he only appears as Nightwing at the end of the issue. But if you’re a Dick Grayson fan, you’re going to want to see how Dick starts the next stage of his life.