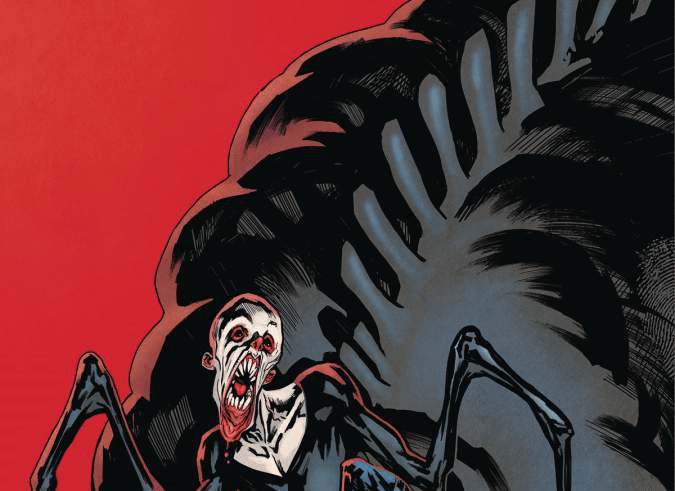 Writer Steve Orlando released the first two parts of his NIGHT OF THE MONSTER MEN story arc this week. Hugo Strange has released actual monsters into the streets of Gotham! Nightwing works alongside Batman and the rest of the Bat-family to ensure citizens are safe. Can our heroes protect everyone and stop Hugo Strange? Let’s find out!

READ: Check out Nightwing’s last adventure in our review of NIGHTWING #4

The issue begins with Luke and Alfred in the Bat-cave assisting the away-team out in the field. Meanwhile Batman sends Nightwing to the morgue to try and determine the origin of these monsters. When Batman and Batwoman’s attempt to trap a monster fails, Nightwing swings in to assist. But Batman is angry that his order was ignored, so Nightwing begrudgingly goes to the morgue to investigate. On his way there Alfred informs Nightwing that these monsters were once human. Once he arrives at the morgue he discovers there are four people who were turned into monsters. The Bat-family took down three monsters. Alfred discovers the identity of the fourth was a Blackgate prisoner who tried to kill Batman! The issue ends with Gotham Girl ignoring Batman’s orders to stay behind and flying towards Blackgate Prison!

This was a jam-packed issue in terms of story and characters. Best of all you don’t have to read all the issues leading up to this one in order to appreciate this comic. I must commend Steve Orlando and Tim Seeley for providing enough information in this issue to allow readers who haven’t keep up with DC’s Rebirth to know what’s going on. They manage to incorporate the necessary information that new readers will need organically into the story. In this issue we find Batman once again closing off certain members of his team to keep them from getting hurt. Whenever Batman suffers a tragic loss he usually reacts in this way. In this case it was the death of Tim Drake in DETECTIVE COMICS #940 which caused Batman to worry more than usual for his teammates, particularly Nightwing. 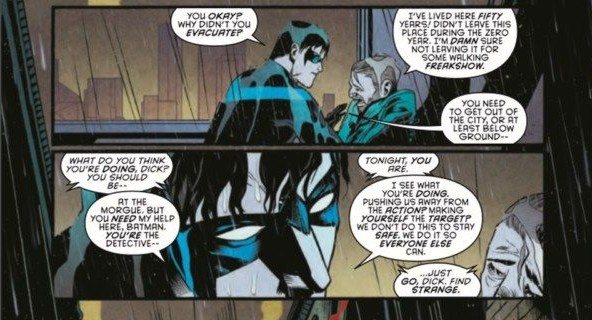 Now Nightwing has been a part of Batman’s team since he was Robin, and the two have been through a lot together. After what happened to Tim, Batman has every right to be concerned. However, Nightwing is a grown adult who is willingly choosing to put his life in danger in order to save others. If Nightwing had obeyed Batman, he would not have saved someone falling to their death because of the monster attack. It makes perfect sense that Nightwing would disregard Batman’s order and dive right into the danger! Batman’s orders aren’t just ignored by Nightwing; Gotham Girl dives into the action despite what Batman tells her.

READ: Take a look at the heart-breaking comic of Red Robin’s demise in DETECTIVE COMICS #940

Gotham Girl’s powers are slowly killing her and Batman is aware of this fact. The fact that Batman recently lost someone and that Gotham Girl’s life is slowly shortening with every use of her powers all adds up to Batman refusing to let her go out in the field. But like Nightwing pointed out earlier, they’re all soldiers in this war to protect Gotham. If they want to put their lives at risk, it is their decision to make. This is indeed a chaotic war on all accounts, which is expertly expressed in the artwork.

Artist Roge Antonio captured the insanity of the situation in how the characters fought the monsters. The destruction of the buildings and the flashes of worried citizens’ faces really demonstrated the severity of the situation. Also, the colors that were used for Gotham City were different then ones that I’m used to. Typically, the city is painted with gray or black, but in this issue the city had other (albeit dark) colors sprinkled throughout the issue. I personally admired the use of red and orange when the final monster made his appearance; it made it seem like a creature from Hell was coming up from the ground! 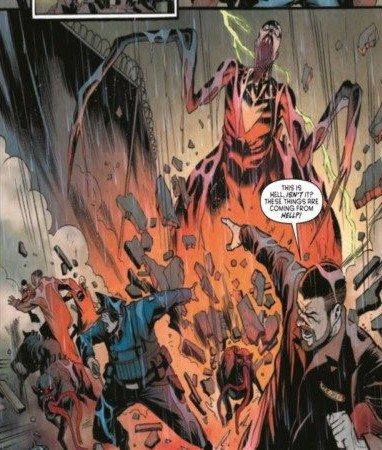 I can’t in good conscience recommend you read this issue without at least reading BATMAN #7. While the issue does provide enough information on its own, you will get more out of the story if you read the first part. This was a fantastic issue in terms of the overall story arc, but as a NIGHTWING issue, it was lacking. There was a bit more focus on Nightwing for this part of the story, but not as much as I would have liked considering this is a NIGHTWING comic. So definitely check this issue out for the overall story, which Steve Orlando is setting up to be one heck of a ride!