As many fans know, Batman has allowed the tragedy of his parents’ death to define him. Everything Batman does is in the name of the family he lost and was never given closure for. When Batman took Dick Grayson in, it was to make sure he grew up to be better than himself. Batman wanted Dick to be at peace with his parents’ death so he could move on from that tragedy. In NIGHTWING #20, however, Dr. Hurt pushes Nightwing’s mental state by making him relive another tragedy. Dr. Hurt hopes that the misfortune will mold Nightwing’s mind into that of a weapon. Yet, Dr. Hurt failed to realize that Nightwing isn’t like his mentor in that regard — he’s better.

READ: Catch up on the “Nightwing Must Die” arc by taking a look at our review of the previous issue!

In the previous installment, Nightwing was rushing to save the current Robin (Damian Wayne) from being a sacrifice by Dr. Hurt. Nightwing arrives just in time but suffers from the cut given to him by Deathwing at the beginning of the arc. Now in NIGHTWING #20,  the wound Nightwing received is forcing him to relive a tragedy suffered by another version of himself. While Dr. Hurt explains his plan, Nightwing struggles to break free from the mental spell he’s under. Meanwhile, Defacer and Deathwing have a heart-to-heart. Eventually, Nightwing manages to free himself from Dr. Hurt. Unfortunately, their confrontation leads to the destruction of the underground building. Towards the end of the issue, our titular hero has returned to Blüdhaven. The “Nightwing Must Die” arc concludes with Nightwing realizing he can’t always live in the moment, sometimes he has to look to the future.

As the title of the review suggests, NIGHTWING #20 illustrates what defines Nightwing as a hero. Unlike his mentor, Nightwing is motivated to help others for the sole reason that it’s the right thing to do. Writer Tim Seeley perfectly demonstrates this altruistic quality in Nightwing. Through the use of Dr. Hurt as the villain, Seeley is able to show Nightwing’s other characteristics. In this issue, Dr. Hurt shows his villainy by attempting to mold this hero into a weapon using tragedy. Yet, by Nightwing being able to overcome this technique shows the strength of his character. Nightwing was motivated to break free from Dr. hurt’s hold in order to save Damian — putting others before himself. I also must compliment Tim Seeley on balancing Dr. Hurt’s explanation with Nightwing’s mental turmoil. It provided the reader with necessary information and was entertaining to look at. 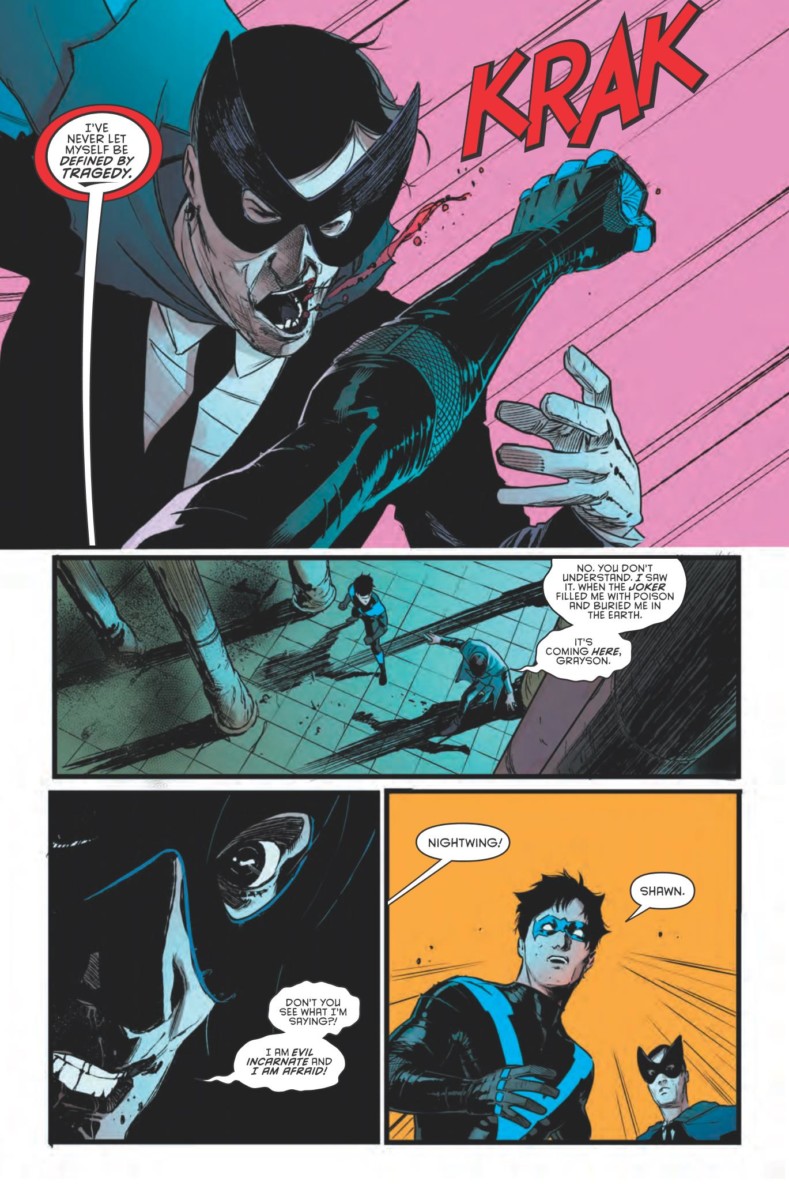 The only negative I have with the story would be the results of Shawn’s pregnancy. Seeley missed out on a huge opportunity for some stellar stories, had he decided to let Shawn be pregnant. The “Nightwing Must Die” arc already pushed Nightwing towards being more responsible and thinking about the future. He would have to go through the added responsibility of protecting the mother of his child, which could result in great character development. I’m still wholeheartedly invested in Dick and Shawn’s relationship regardless of the results. I look forward to seeing where Seeley takes it in the next arc.

A major positive from the “Nightwing Must Die” arc would be the Dick and Damian relationship. After teaming up with Dick as Batman and Robin, his character has grown remarkably. Damian went from being a spoiled and entitled brat to a snarky, yet likable, character. Now Damian is capable of being a team player, as shown in NIGHTWING #20 and the TEEN TITANS series. Seeley was able to illustrate their relationship through the dialogue and comradery between the two heroes. Grant Morrison’s 2009 BATMAN AND ROBIN run sparked the brotherhood of Dick and Damian, and Seeley continued it flawlessly.

The Artwork of a Dream

As for the artwork by artist Javier Fernandez, that continues to be excellent. The fight scenes, in both the dream sequences and in reality, are intense and vibrant. Readers will be able to feel the impact of Nightwing’s fist when he lands a blow on Dr. Hurt. Also, the panel design aiding in illustrating the change between reality and the memory was executed exceptionally well. Wavy panels indicated a dream sequence occurred. The use of darker shades of colors also helped show the difference to the reader. Colorist Chris Sotomayer would occasionally change the color of the border of the panel to indicate which character would receive focus. The spotlight was on Deathwing when the panel border was red, but the focus was on Nightwing when the color of the panel border turned blue. 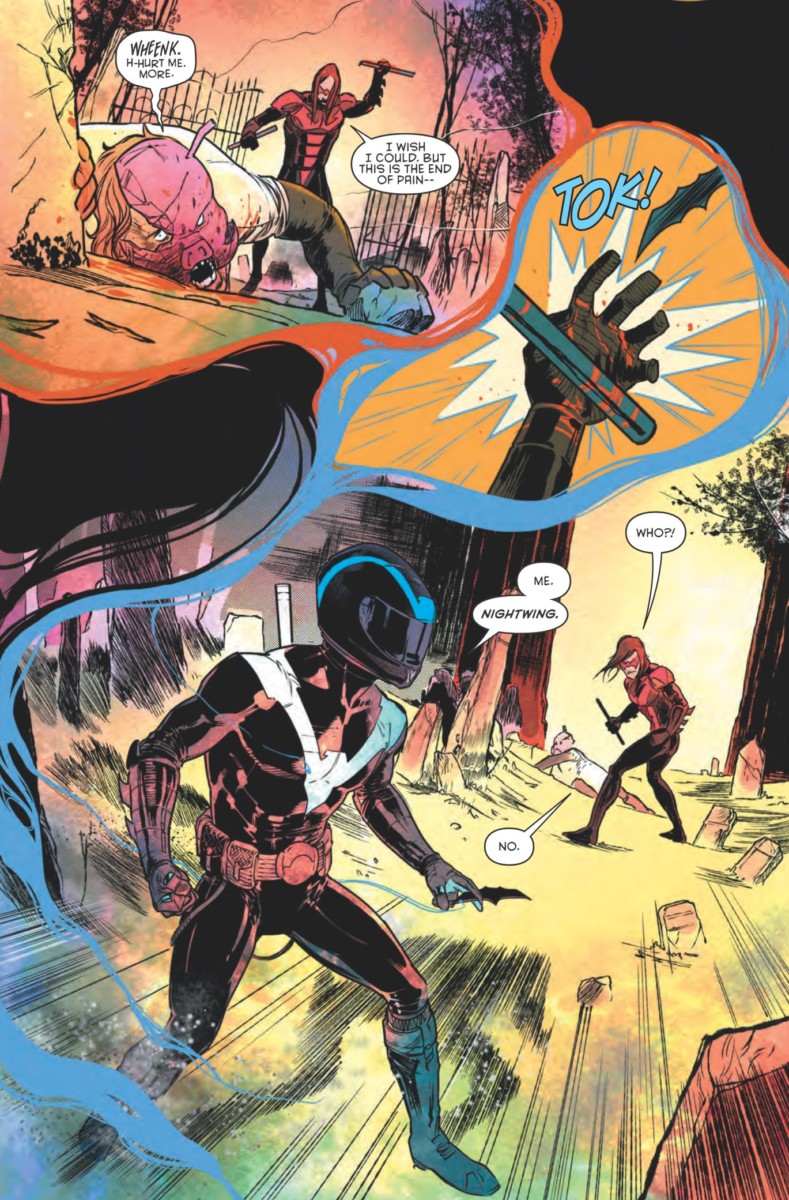 In the end, NIGHTWING #20 is a satisfying conclusion to a pretty great arc for Nightwing. Once again, I really wish Seeley had stuck with Shawn being pregnant. It might have been a missed opportunity, but that still doesn’t diminish the quality of the overall arc. Nightwing fans and comic book fans alike should definitely pick up this issue.