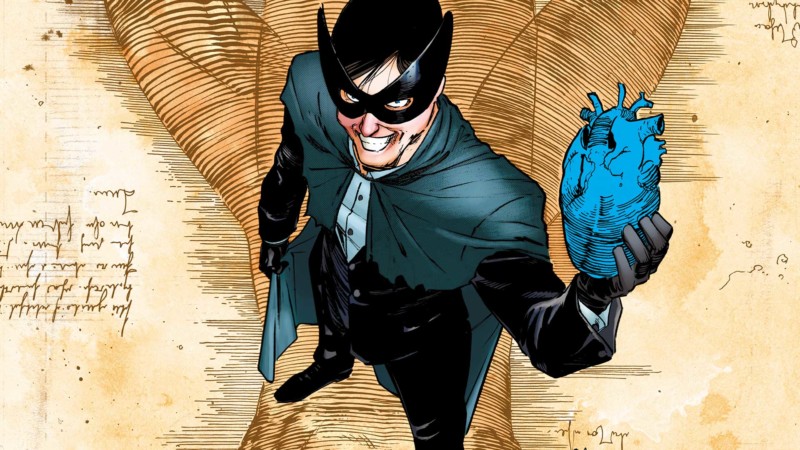 From Robin to Nightwing, to Batman to Agent 37, and finally back to Nightwing — Dick Grayson is one of the few comic book characters that’s allowed to grow and change. In being able to play all these roles, Dick has made some mistakes he’d rather forget. In NIGHTWING #19, however, Dr. Hurt plans on reminding Dick of these past errors in the most conniving way possible.

READ: Catch up on the “Nightwing Must Die” arc with our review of NIGHTWING #18!

The issue begins in Saqqara, Egypt with Dick and his girlfriend Shawn (Defacer) incognito as a couple who write travel blogs. Their guide turns on the duo, and a swarm of men attacks Nightwing and Defacer. After Nightwing and Defacer make quick work of their attackers, they talk to their guide. He provides the intel they need to save Damian (Robin). After they descend into the temple, Nightwing is attacked by Deathwing, the dollotron created by Professor Pyg with Dick’s old costume. After his fight with Deathwing, Nightwing leaves the unconscious dollotron with Defacer and continues down the temple to come face-to-face with Dr. Hurt.

The positives in NIGHTWING #19 are all the outstanding character moments from everyone, minus Dr. Hurt, but I’ll get to him later. Despite having saved Shawn, Nightwing isn’t out of the woods yet. He not only has to save Robin but also the dollotron Deathwing — not to mention face the fact that he might be a father! That could make for an excellent story in the future if Seeley decides to let Shawn keep the baby.

Now I know some people may criticize the fact that Shawn is joining the mission despite being pregnant. I feel, however, that this shows the strength of Shawn’s character. I’m glad writer Tim Seeley had Shawn kick some butt in NIGHTWING #19, especially since she was the victim in the previous issue. Even Deathwing had some standout moments and lines in this installment. The way he uses his knowledge of Nightwing’s insecurities to his advantage make him a memorable antagonist.

READ: Did you see the recent JUSTICE LEAGUE trailer? Take a look at our thoughts on it here!

The negatives in this issue come from the lack of time spent with Dr. Hurt, our main villain of the arc. So far all Dr. Hurt has done is use other people to harm Nightwing and his friends. Dr. Hurt himself hasn’t done anything to Nightwing personally, and because of this, I can’t really form an opinion on how he is as an antagonist. Also, I’m worried that with all this build up, Seeley will have Dr. Hurt explain everything in the next issue. Seeley has the tendency to bring his stories to a halt when he has a character describe their plan — it basically puts the story on pause to explain necessary information to the reader. NIGHTWING #19 doesn’t suffer from this problem, but I have a feeling the next issue might. I hope I’m wrong and Seeley surprises me.

The artistic duo of Javier Fernandez and Minkyu Jung return for this latest issue of NIGHTWING. The location has changed from Blüdhaven to Paris to Egypt, allowing these artists to showcase their ability to draw various landscapes. They’re gorgeous to look at, and the colors by colorist Chris Sotomayer really make the images pop. It’s amazing how there are a variety of colors used during night scenes — like purple, dark blue, and light red. The use of colors during the fight sequences also helped add more of an impact on the reader. I also loved the huge panel displaying Nightwing and Deathwing’s fight. In that one panel, we saw every blow the two fighters exchanged; it was riveting.

In the end, NIGHTWING #19 is a good read for Nightwing fans and continues “Nightwing Must Die” in an engaging way. The fight sequences and character development really help make this issue great. Be sure to grab NIGHTWING #19 this week to see all the character moments and artwork that this issue contains!