Nightwing and Robin continue their team-up to save Dick’s girlfriend Shawn, the possible mother of his child. In NIGHTWING #18, writer Tim Seeley brings back a familiar face from Nightwing & Robin’s past. Professor Pyg was the one responsible for Deathwing, Robintron, and Shawn’s abduction. Is Professor Pyg the true mastermind, or is there a bigger game at play here?

READ: Want to catch up on this arc from the beginning? Take a look at our review of NIGHTWING #16!

The issue opens with Professor Pyg ranting about art in an underground gallery, with a tied up Shawn next to him. Nightwing and Robin bust through the window, then proceed to beat up all of Pyg’s dollotrons. Unbeknownst to the villain, Robintron is assisting our heroes from a distance by keeping an eye on Deathwing. Unfortunately, Deathwing manages to escape and causes more trouble for our duo. NIGHTWING #18 wraps up with an injured Nightwing and Robin captured by the man who orchestrated Shawn’s abduction. 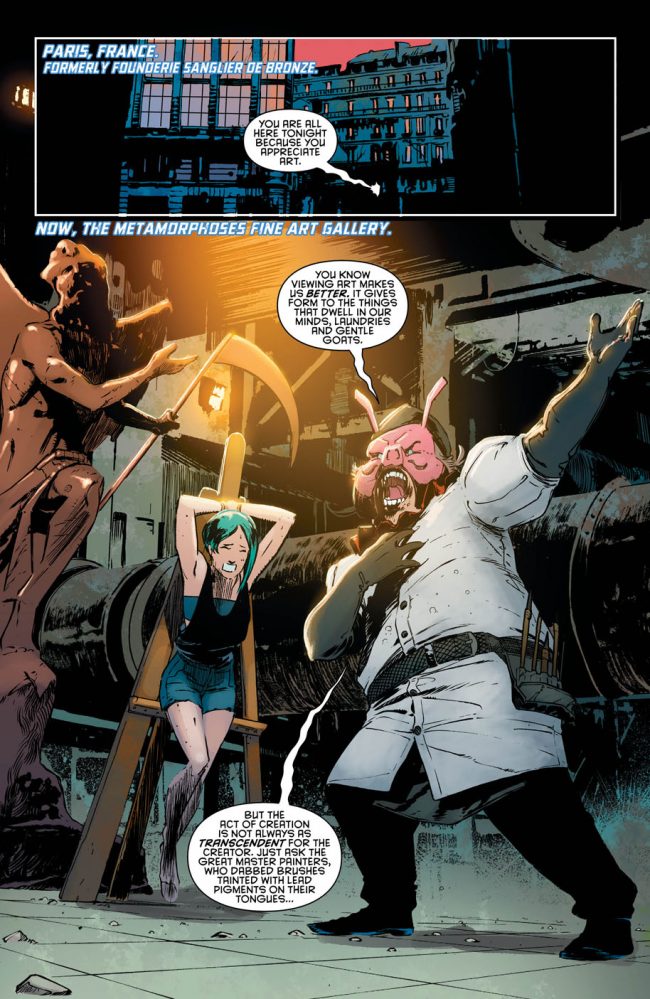 The major complaint I have with NIGHTWING #18 is a common trend I’ve noticed with Seeley’s work lately. In his last arc, he ended every issue with the introduction of new villains and characters, and it seems that Seeley is falling back on old habits with this latest arc. We’re three issues in and each one has ended with the introduction of a new antagonist. There’s nothing wrong with the villains themselves, as they’re quite menacing in their own unique ways, but it’s starting to get repetitive. Aside from that, the story is a fascinating one which promises to lead to something bigger down the line.

The standout character in this issue for me would have to be Robintron. Seeley has a talent for making secondary characters that are relatable and engaging in a relatively short amount of time. Seeley did this in the previous “Blüdhaven” arc with the Run-Offs, and he’s done it again in NIGHTWING #18. As stated earlier, the dollotrons created by Professor Pyg were once people. Despite Robintron being brainwashed into believing that he’s actually Damian Wayne, some memories of his previous life bleed through. This makes for a touching scene where he breaks up a fight between Nightwing and Robin. Robintron’s speech convincing them to stop contains a mix of both Damian and his own past life. The real Robin also had some great quips in this issue. They were far more aggressive than Dick’s quips ever were when he was Robin, but Damian is a more assertive character.

READ: See the Titans and their mentors go head to head in our review of TITANS Annual #1!

Oddly enough, the titular character of NIGHTWING #18 gets less attention in this issue. Nightwing’s focus was on saving Shawn, so he didn’t have time to be funny or charming. Another reason Nightwing may have been less chatty is because of what he saw in the previous issue. When Deathwing cut Nightwing’s forehead in NIGHTWING #17, he saw alternate versions of himself and Damian. This clearly shook him up, leaving both Nightwing and the readers to wonder what these visions could mean. Speaking of alternate versions of Dick and Damian, they both get a blast from their past in the form of Professor Pyg. It was so nostalgic to see this character return, and Seeley does a phenomenal job portraying him – almost as good as Grant Morrison did during the 2009 BATMAN AND ROBIN run. Pyg was insane, sadistic, yet somewhat charming in this issue and I loved every panel of him.

NIGHTWING #18 featured two artists, Javier Fernandez and Minkyu Jung. The overall look of the comic was great. The fight scenes with Nightwing and Robin against the dollotrons effectively showcased their individual fighting styles. Nightwing used various flips and kicks, whereas Robin used his fists and small stature to his advantage. The way they transitioned to the flashbacks in this issue was clever as well. There was a close-up panel on the blood on Nightwing’s forehead, which perfectly segued to the blood on the blade that cut him in the last issue. Not to mention the emotion of Robintron completely relied on his eyes. The artists couldn’t create any huge facial expressions on the dollotrons since they all wear masks, yet they managed to get the emotions of this character across flawlessly. 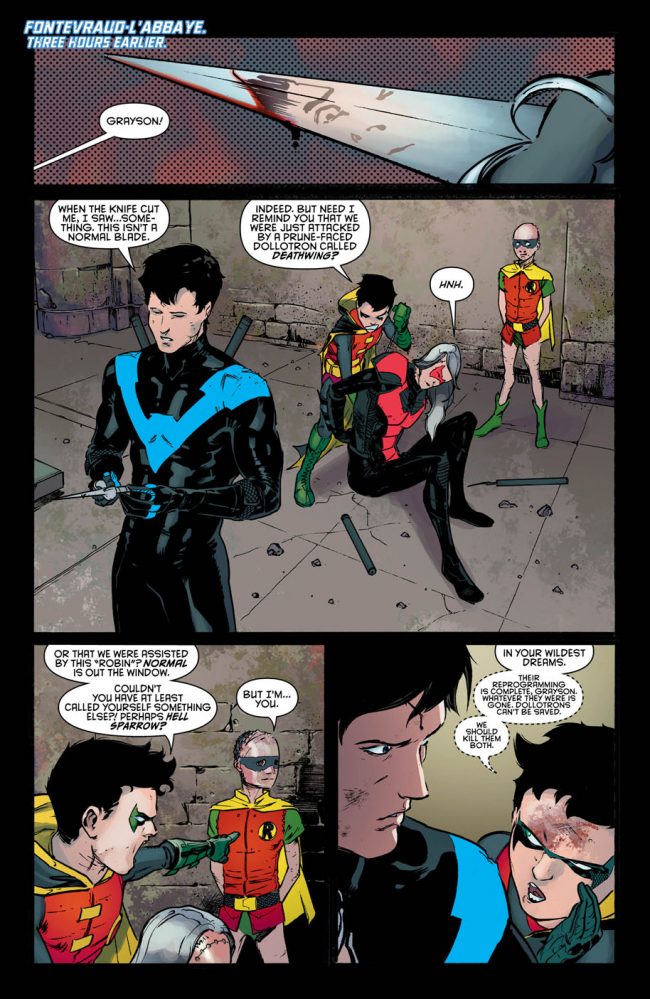 NIGHTWING #18 is another solid issue, despite Seeley falling into this trend of ending his issues with the introduction of a new villain. There’s plenty to love in this installment, even if Nightwing isn’t the standout character. If you’re a fan of the Grant Morrison BATMAN AND ROBIN series and miss Professor Pyg — then this issue was practically made for you. Even if you’re not a fan, NIGHTWING #18 still delivers a great continuation to an engaging story. Be sure to make it part of your reading list this week!