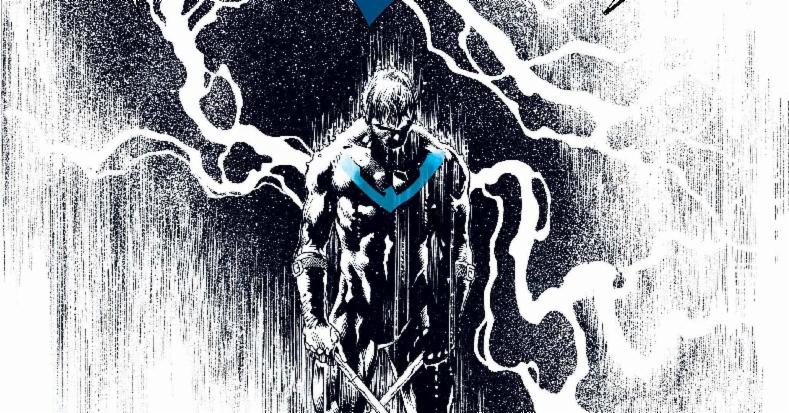 Despite the fact that the “Blüdhaven” arc had a strong beginning, it started to drag on by the third issue. Writer Tim Seeley focused too much on exposition, and the pace of the story suffered as a result. Thankfully, the last issue returned to a stronger pace with the reveal of the masked man’s identity. By the end of the previous issue, Nightwing was framed for attempted murder and captured by Detective Svoboda. Now, in NIGHTWING #14, our hero’s “Blüdhaven” arc comes to a close. In this issue, Seeley delivers a satisfying conclusion but misses out on a great opportunity, storywise, for Nightwing.

READ: Catch up on the build up to this conclusion in our review of NIGHTWING #12!

NIGHTWING #14 opens with Nightwing, Defacer, and Detective Svoboda working together to capture the masked man and save Cherry. Defacer figures out that they need to go to the industrial wasteland known as the Tail Peninsula in the outskirts of Blüdhaven. Once they arrive, the duo find Cherry and begin to fight the masked man. However, Nightwing tells Defacer to get Cherry to safety before the final confrontation is over. 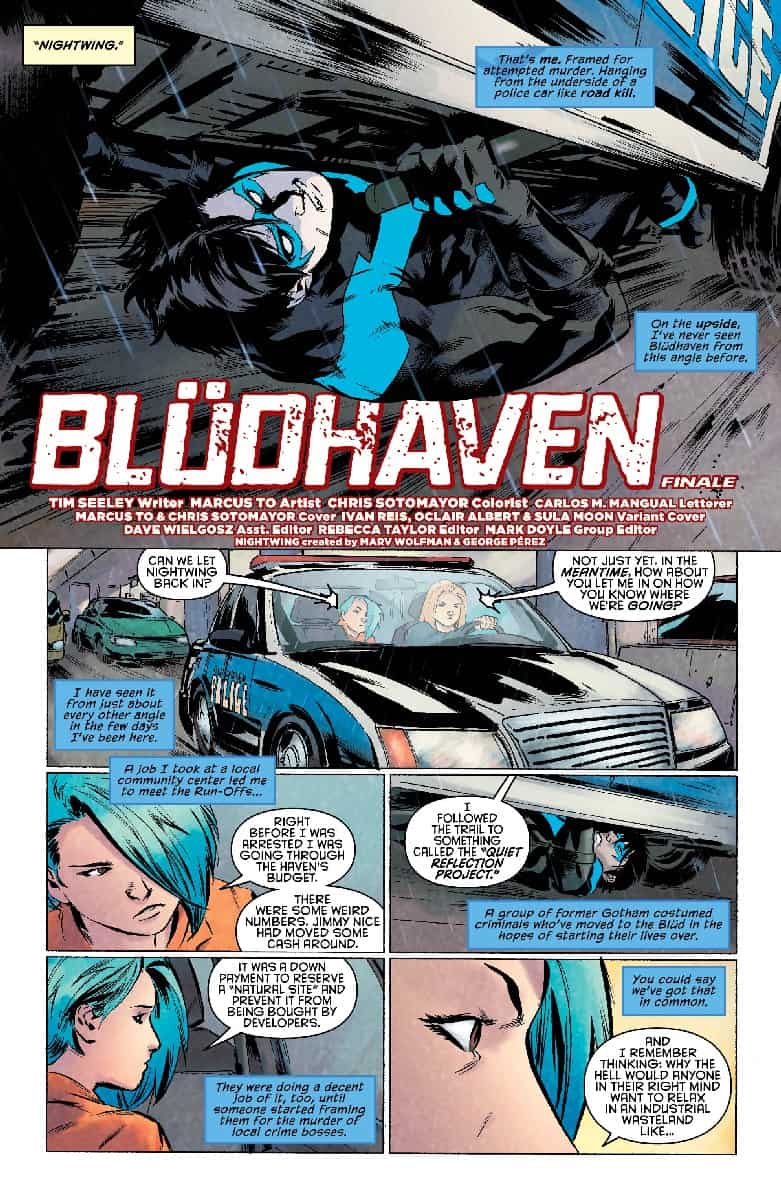 My biggest complaint is how fast and easily everything is wrapped up. The last issue made it seem like Nightwing would face some serious consequences being framed for murder. To see these problems resolved so quickly is seriously disappointing. The next arc could’ve been Nightwing as a fugitive, which would have set up an amazing redemption arc to clear his name! Instead, NIGHTWING #14 just tied up all the loose ends. Another problem was the way Seeley turned the masked man into a Batman villain, not to spoil anything. Just read the issue, and you will know exactly which one I’m talking about. If Seeley wants to give Nightwing his own set of rogues, then they should be unique to Nightwing–not just copies of Batman’s villains.

READ: Speaking of Batman, check out our interview with Jason O’Mara, the voice of Batman in JUSTICE LEAGUE DARK!

Seeley still manages to deliver, however, on his overall message with elegance and clarity. The “Blüdhaven” arc began because Dick Grayson wanted to rediscover who he was outside of the Nightwing identity. In this issue, Nightwing learns that he’s focused too heavily on his past mistakes. Now, he and the Run-Offs want to learn from them and move forward with their lives. In fact, one the biggest highlights of this issue and the arc as a whole is the tender moment shared between Nightwing and former Run-Off, Defacer, as they each learn to stop allowing their past mistakes to dictate their future. 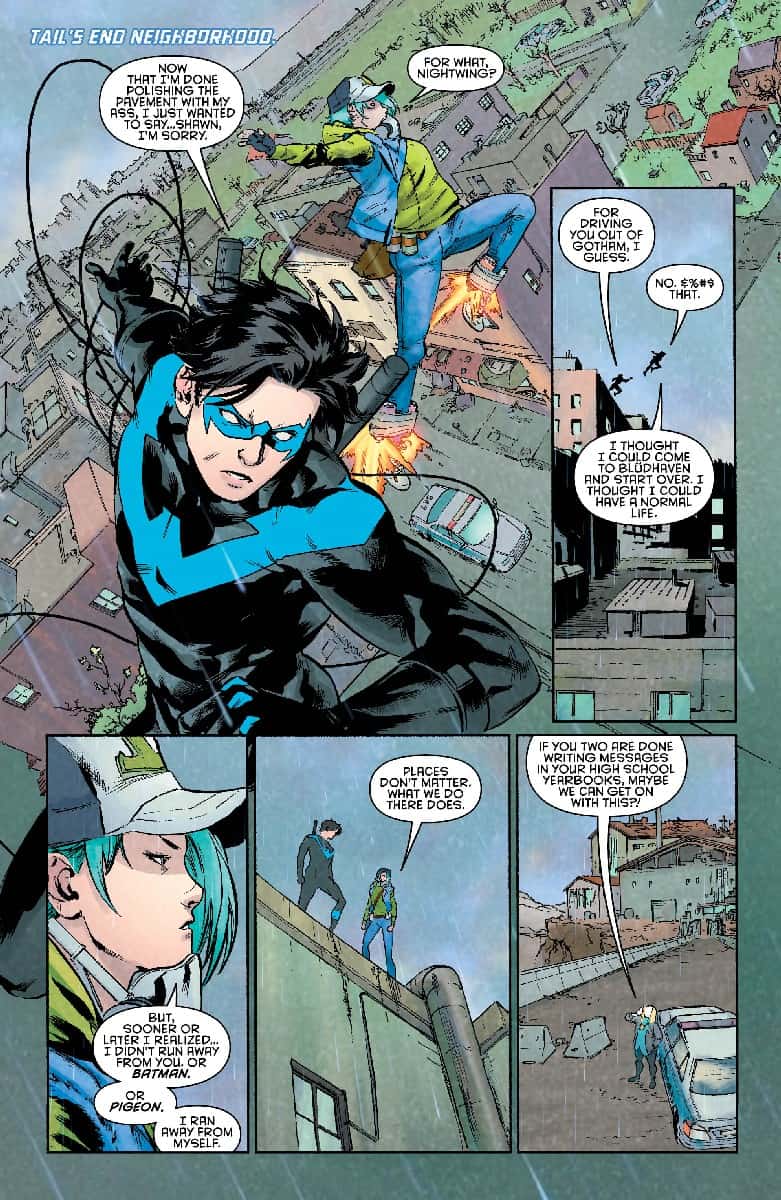 As for the artwork by Marcus To, it has been consistently excellent throughout the entire “Blüdhaven” arc. The way he draws Nightwing effortlessly flipping through the air across the Blüdhaven skyline is truly breathtaking. The action sequences of the masked man against Nightwing and Defacer were crisp, intense, and fast-paced. Marcus To is also extremely gifted when it comes to the characters’ facial expressions. The panels that used close-ups of these expressions during the fight only added to the intensity. Colorist Chris Sotomayor also added to the ferocity of the fight by having the masked man’s brightly colored weapons provide an interesting contrast between Nightwing’s black colored Eskrima sticks.

NIGHTWING #14 provided a decent conclusion to the “Blüdhaven” arc. Tim Seeley missed an opportunity to take the Nightwing character to a new and different place with the way the last issue ended. However, regardless of how this issue could’ve turned out, I recommend reading it and the arc as a whole. It features an excellent character arc for Nightwing and brilliant artwork as well. While this “Blüdhaven” arc might not be on the same par as “Better than Batman,” it should still satisfy Nightwing fans everywhere.