Dick Grayson, AKA Nightwing, is the most relatable protagonist in all of DC. I believe this for several reasons: firstly because he’s just a guy in a costume trying to do the right thing. Sure he has a tragic past, but it didn’t define him the way it did Batman. He has a moral code that he won’t break under any circumstances. Secondly, he questions himself constantly. He reflects on his actions, he’s easily hurt by the betrayal of others, and he consistently asks himself whether he could have done things a different way. Not the kind of self-reflection you usually see in heroes with experience like Batman or Superman. Finally, Nightwing was a sidekick with a mentor whose shadow he’s tried to escape. He has the burden of living up to an ideal that was set for him, while simultaneously trying to escape it and redefine himself. It’s the kind of journey we all take. It’s the kind of narrative that has been explored so thoroughly by writer Tim Seeley, and most effectively in this week’s issue, NIGHTWING #11.

READ: Nightwing encountered the DC REBIRTH Superman for the first time in NIGHTWING #9, and we reviewed it here!

In the last issue, Dick Grayson journeyed to the familiar city of Blüdhaven, seeking a fresh start. He hoped to learn to trust himself again, following the betrayal of pseudo-mentor Raptor. These hopes were quickly dashed as Nightwing got pulled into a conspiracy involving an old enemy, Gorilla Grimm, being framed for murder. Dick also got involved with a girl named Shawn, who’s running a support group. At the end of the previous issue, Shawn was revealed to be an old enemy of Nightwing’s named the Defacer. NIGHTWING #11 picks up that thread, beginning with a flashback to the night when Dick first met the Defacer, back when he was a sidekick to Batman and she was a sidekick to a villain named the Pigeon. As Pigeon and Defacer are brought to justice, Robin comments to Batman that Defacer was just a sidekick, and perhaps with a better mentor, she wouldn’t have started down the wrong path. This comment winds up being the focal point of the issue, both for the plot and for Dick emotionally and psychologically. 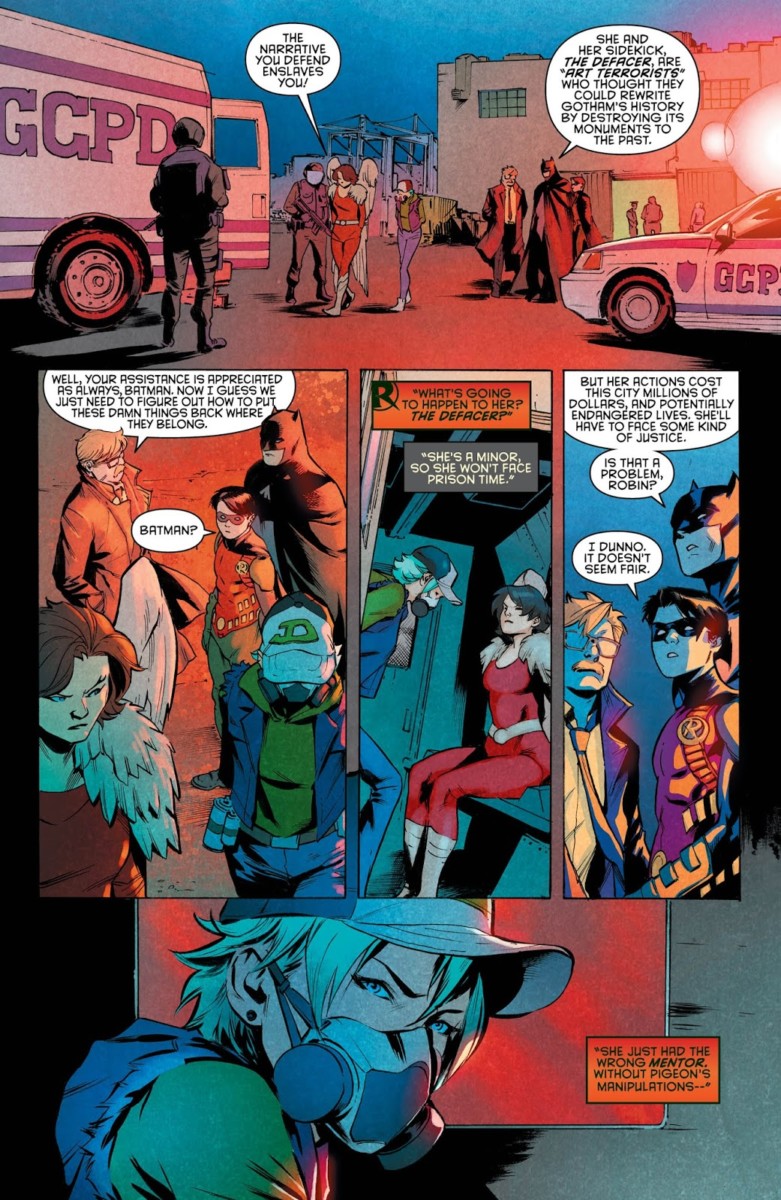 In the present day, we learn that Defacer is part of a support group in Blüdhaven for former villains called the Run-Offs. Dick has encountered each of them as Nightwing, and though they were once genuine criminals, they’re now seeking to redeem themselves. Gorilla Grimm was also part of the Run-Offs, and the group begs Nightwing to help clear Grimm’s name. As Nightwing plunges into the criminal underbelly of Blüdhaven, he comes to grips with the role he played in these criminals’ lives, as well as his own quest for redemption.

Seeley’s plot is expertly executed, with Nightwing’s detective work in full force. Blüdhaven’s sinister criminal element provides a compelling maze into which Dick wades, probing for truth about the murders. Although the plot is secondary to the all-around wonderful characterization. Through Nightwing’s always engaging narration, we get to see these criminals through his eyes and understand how much he sympathizes with them. Seeley’s support group setting brilliantly takes real psychological concepts and applies them to superheroes. One character, the Stallion, after an early battle with Nightwing, curls up in a corner and reminds himself of his therapy — “I engage in violence against men to satisfy my urge to be close to ‘em.” Another former villain, Thrill Devil, confesses in a group session that his life-threatening joy rides were always about achieving a high, until he “remembered those moments weren’t highs, they were lows. If I hurt myself, I hurt you guys.”

Utilizing these actual precepts of modern psychotherapy, Seeley expertly subverts supervillain conventions, revealing the layers of humanity beneath the masks. On a deeper level, these revelations also reflect Dick’s inner turmoil. He came to Blüdhaven because he could no longer trust himself. He didn’t like the person he saw in the mirror and wanted to use Blüdhaven as an excuse to hide in the darkness. Through seeing supervillains in therapy, Dick realizes there’s a chance for him too. Like them, Dick Grayson needs someone to talk to. Through Shawn, Dick’s new romantic interest and the Run-Off he most identifies with, Dick sees a chance to escape the mentors of his past. He and Shawn were both sidekicks who felt led astray by their mentors. For Dick, the problem is two-fold, as he seeks to escape the shadow of both Batman and Raptor. Though two very different kinds of mentors, they each taught lessons that Dick at once accepted and rejected. With any mentor, we ultimately must learn to accept the lessons we find valuable, and discard the ones we don’t. Dick has learned this the hard way, and wants to make a name for himself — he wants to be his own man. It’s is a struggle we can all relate to. 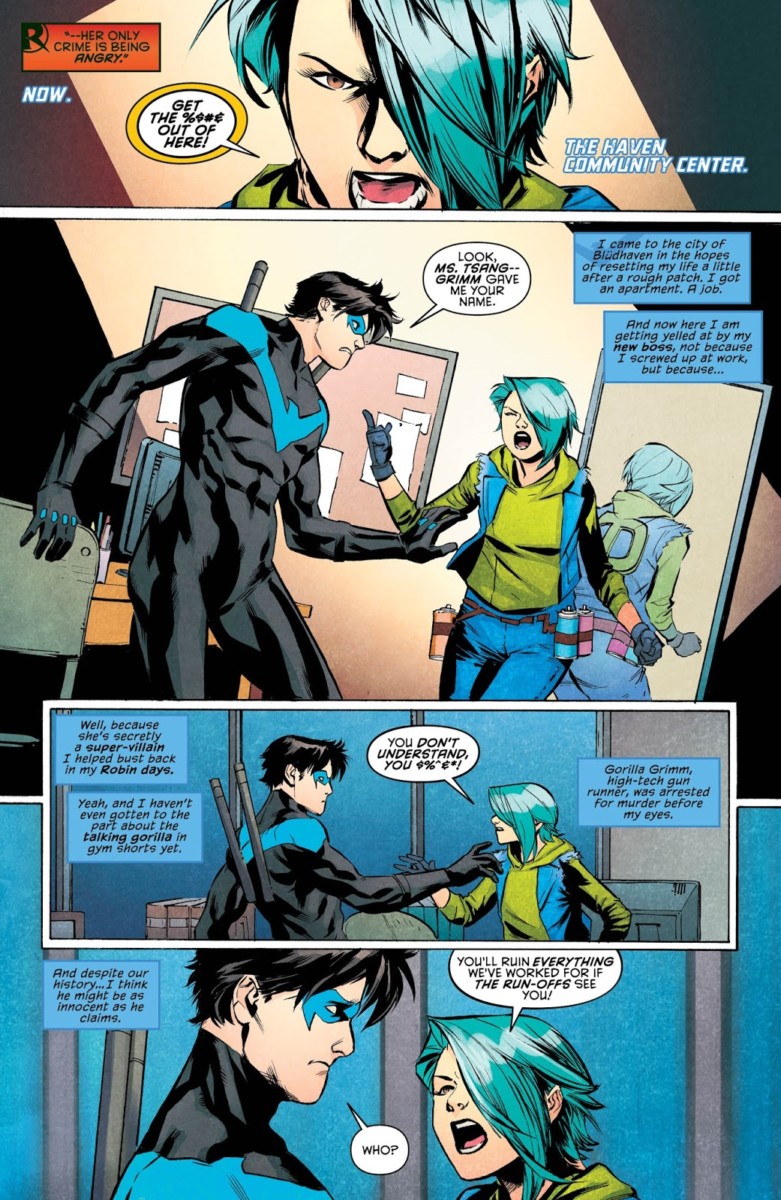 Adding further relatability is artist Marcus To, who draws his characters with real-life grittiness. There isn’t much dazzle or spectacle to these pages, especially when compared to the artists working on the bigger-than-life heroes like Batman and Superman. Yet Nightwing isn’t a larger than life hero. He’s a hero of the Earth, a normal guy who happens to grapple from building to building and take down criminals. The art style represents the home-grown hero model, with thin character stencils and backgrounds that blend in with the action. Nothing pops out, but nothing’s irrelevant either. It’s all part of one big representation of the dirty, urban monolith called Blüdhaven.

With Seeley’s humanizing characterization and To’s naturalistic art, NIGHTWING #11 presents another slam-dunk tale of the former Robin and his quest to be his own unique brand of hero. This is Dick Grayson at his most relatable, Dick Grayson as the quintessential wish-fulfilment hero. Batman and Superman are the heroes we want to be. Nightwing is the hero we are inside.