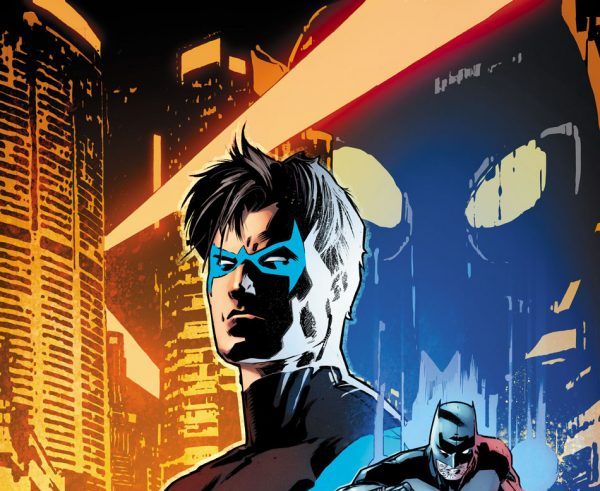 Dick Grayson soars as his former superhero persona in NIGHTWING #1. Writer Tim Seeley sets up the first chapter of this story arc titled “Better Than Batman.” In this issue we get plenty of Nightwing moments and interactions with other members of the Bat-family. The former artist of RED HOOD/ARSENAL, Javier Fernandez, lends his talents to illustrate Nightwing and a few new characters introduced in this issue. This comic certainly has the talent to make this story incredible, and yet this was an underwhelming beginning to Nightwing’s first story since his return to the superhero life.

READ: Check out our review of NIGHTWING REBIRTH #1!

The comic begins with an elderly woman and dead man named Padurar digging in a graveyard. The woman seeks the coins of the dead souls who pay Charon to cross the River Styx. A mysterious hooded figure shoots down Padurar as soon as he finds the box. Then the man in the hood proceeds to bury the woman alive! Elsewhere Nightwing is off doing various tasks for the Parliament of Owls. Since Nightwing refuses to kill for them, they assign him a partner. After meeting with Batman and Batgirl in Gotham, he heads to the Muzeon Park of Arts. There he meets the hooded man, his new partner Raptor. Raptor feels Dick is too distracted because of Barbara, so the two begin to fight. The comic ends with Raptor telling Dick that everything Batman has taught him is wrong! 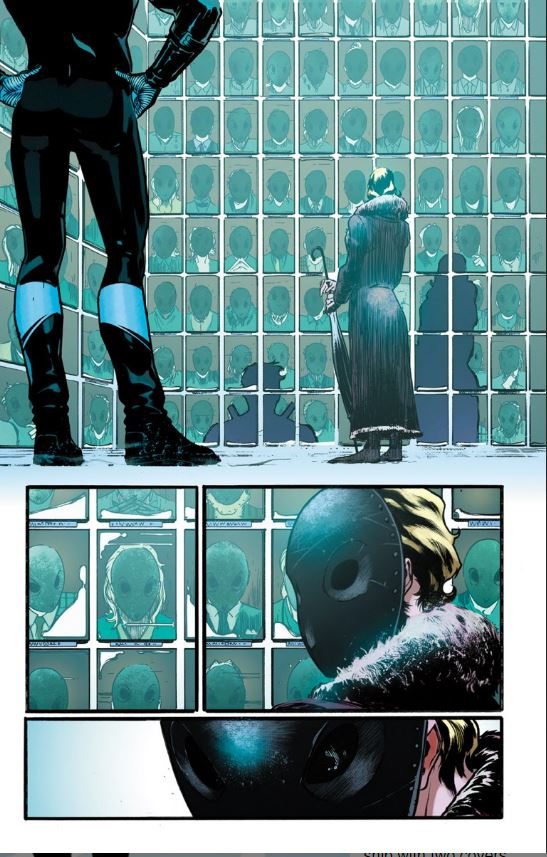 Once again Seeley proves to have tremendous skill when it comes to portraying Dick Grayson. It’s truly wonderful see Nightwing make silly quips and beat up the bad guys once again. It isn’t just Nightwing who makes this issue entertaining; it’s also his interactions with the other members of the Bat-family. When he visits Bruce it’s almost like he’s a young adult returning home to seek advice from a parent. As the parent, Bruce decides to give Nightwing tough love. Personally I feel that’s exactly what he needed. Dick wanted to be his own man, so now he has to deal with his problems on his own.

As for Nightwing’s meeting with Batgirl, it was adorable. Those two still have fantastic chemistry and it was quite nostalgic to see Nightwing and Batgirl interact once again. In this meeting it was clear to see the difference in the relationships Dick has with Batman and Batgirl. Batgirl was far more concerned for Dick’s safety, and he appreciated that she cared. Nightwing, like many people, needs some companions to push him and others to care for his well-being. So in this comic we have an engaging protagonist along with a fantastic supporting cast. Unfortunately the comic falls short when it comes to the actual story.

The opening of the comic was intriguing, yet I was not very invested in the story. It seems that Raptor wishes to take the role of Nightwing’s new mentor. A similar storyline was done with Deathstroke in DEATHSTROKE’S DARK KNIGHT, so Seeley isn’t breaking any new ground. It’s still far too early to tell how this story will play out, but as it stands, this was a weak opening. As much as I enjoyed the Court of Owls story and how it influenced Dick’s life, I feel it’s time to move on to some new territory.

As for the artwork in the story, Javier Fernandez does a tremendous job displaying Nightwing’s prowess. The fluidity of his movements throughout the comic panels are masterfully well-done. The designs of Nightwing’s suit are pretty spectacular as well. I love the striped design Fernandez put on Nightwing’s boots. I’m not sure if it was his decision or if it was the combination of both the writer and the artist, but it is a welcome change. Back in the beginning of the new 52 when Nightwing had red instead of blue, I was not on board with that change. That was mostly because it was a lazy suit change, the overall suit was exactly the same – they just swapped blue for red. At least with the REBIRTH suit there is some more added to it, making the overall suit different in a subtle way. 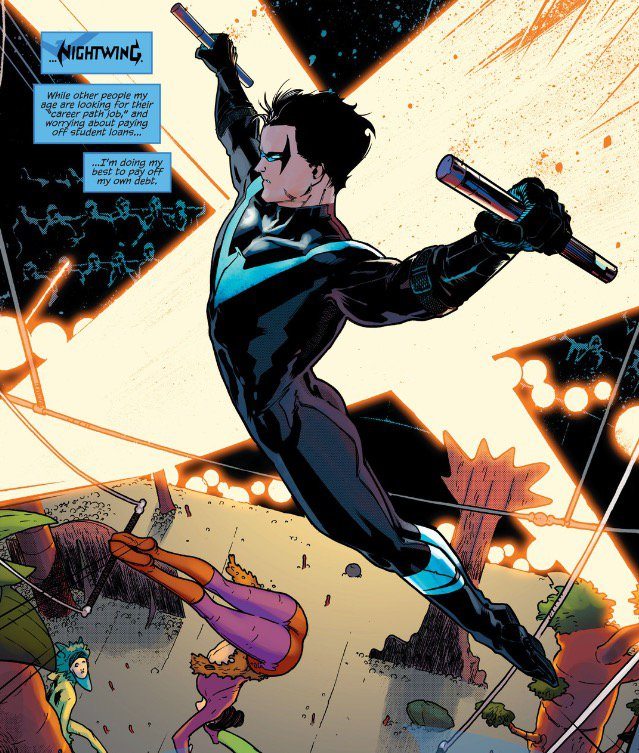 In the end, if you’re a Nightwing fan this issue is worth reading for him and the Bat-family. However, there are other more superior stories involving this superhero out there. This beginning might not have been as strong as I would have liked, but I’m still going to keep reading. As I trust most fans will, we waited a long time for Nightwing to come back and we’re not about to abandon him now!