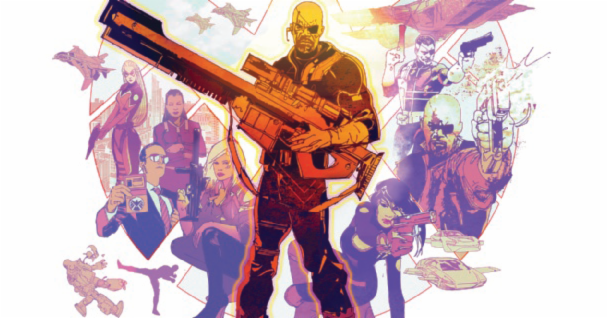 Robinson takes the reader on a fast-paced ride through a typical Nick Fury spy mission. The plot is a fairly straightforward caper, leaving space for fun spy shenanigans. There are supercars, flying speedboats, and X-ray eyepatches. Robinson really dives into the campy spy-genre, which is a refreshing new setting for the normally super-hero surrounded Fury. I appreciated the Casino setting and thought it was a great way to set the tone for the entire series. From the first page on, this comic is one long chase scene. In less capable hands, this type of plot can be grating. However, Robinson constantly throws in a new twist. He also keeps the dialogue lean, allowing the reader to better follow the actin’s rhythm.

Read: Like Fast Paced Excitement? Check out The Return of R-rated Action!

For those who have not been keeping up with the Marvel Universe, this is not the “old” Nick Fury we are talking about. Instead, we are following his son, Nick Fury Jr., who coincidentally is also a S.H.I.E.L.D. spy, and has an eyepatch. He also has the anti-aging Infinity Formula coursing through his veins. This version of Nick Fury fits the role of jet-setting super spy, but there is not much to differentiate him from his cigar-chomping father (or any other Marvel hero for that matter). The downside of all this action is that there is not much time to explore his personality. He is confident and quippy, but besides that, we don’t really get to know the character. Considering this is only the first issue, it is understandable that Robinson chose to focus on tone rather than fleshing out this character.

ACO’s art is a masterful homage to the original Jim Steranko Nick Fury Comics from the 1960s. Every page is overstuffed with bright, trippy patterns and bold figures. The layouts are appropriately swirling and disorganized. This perfectly fits with the casino setting. When Fury first enters the casino, the panels becomes a cacophony of random images from all around the building. You can feel the hectic, loud energy of the casino just from the page layout. These manic panels are also a great representation of how a super-spy would view a space. The highly trained Nick Fury Jr. automatically quells the chaos and is able to hone in on the most important elements of the room.

READ: Are you a Marvel fan? The THOR: RAGNAROK trailer just dropped, and it’s glorious!

The art is also perfectly suited for the fast-paced action-packed plot. By stacking both the actions and reactions in overlapping panels, ACO makes the action feel like it is happening much faster which heightens the stakes. There is so much going on that it feels like Fury’s mission could change at any moment. Tensions are high throughout this entire issue.

Nick Fury #1 is an amazing start to what is definitely going to be a series to look out for. If you love old-school spy capers and classic comic art, definitely check this issue out. And if you’re not familiar with classic spy stories, still check out this story: it’s a ton of fun. Despite the slightly unrefined characterization of Nick Fury, this issue shines as a fresh non-superhero offering from Marvel.