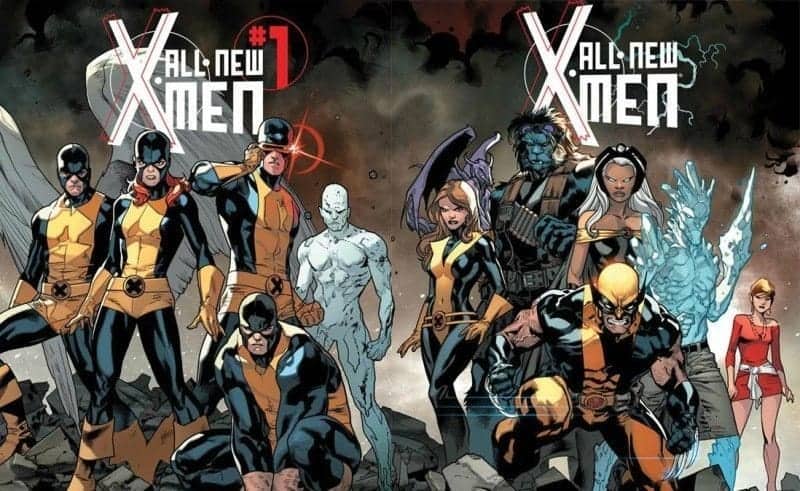 I’m not going to lie. When I first heard the original five X-Men (Cyclops, Angel, Iceman, Beast, and Jean Grey) were returning to present day Marvel continuity, I thought it was a stupid idea. Like many people, I wondered what could possibly be amiss that was preventing The Powers That Be at Marvel from creating original characters with depth and soul. The story of the original X-Men had been told — over decades, and the original run of X-MEN starring this cast lead to low circulation numbers and even temporary cancellation. The book didn’t become a part of pop culture until Wolverine, Storm, Nightcrawler, and Colossus were introduced to the X-Men in GIANT-SIZE X-MEN #1 rendering a decision like bringing the original five X-Men back into the fold as teenagers risky at best and disastrous at worst. What I didn’t realize at the time was one of my favorite writers was leading the charge — Brian Michael Bendis. Luckily, he proved me wrong — very wrong and instead of disaster, the transport of the original five teenage X-Men to our time is surprisingly refreshing and fills a much-needed void in creativity that has been lacking from the X-Men family of comic books for some time now.

LISTEN: Did you know we did a podcast on AVENGERS VS. X-MEN and the start of ALL-NEW X-MEN? Listen to ComicsVerse’s thoughts!

A discussion about Bendis’s latest venture, ALL-NEW X-MEN, should begin with the art involved. Whether Bendis has a hand in choosing the cover art or not, the covers are simple yet nostalgic — something Bendis is a known auteur for; One need look no further than Bendis’s influence over bringing back characters like Spider-Woman and Luke Cake from earlier decades back to the present day Avengers. The art is created by Stuart Immonen, Wade von Grawbadger, and Craig Yeung. These gentlemen are masters of their craft, striking a balance between one of the golden ages of X-Men comics in the 1960’s and 1970’s and a fresh contemporary style that is seen in other Marvel titles. While the layout and paneling broke no new ground (neither did the paneling in WATCHMEN by the way, yet it was genius), images like teenage Jean Grey’s experiences as a freshmen telepath combined with the stylistic simplicity of the art lend themselves to a deeper process of identification through simplification for the audience of ALL-NEW X-MEN. We cannot help but to see our present through their fresh eyes — a profound thought indeed.

In ALL-NEW X-MEN #5, teenage Jean Grey sees the future her adult self endured.

Something amazing about the ALL-NEW X-MEN and another staple of a Bendis book is the vulnerability each character exhibits. One cannot help but to sympathize with teenage Beast as he’s confronted with the death of his older future self. A strange predicament indeed, but Bendis achieves success in evoking a sense of sorrow for the reserved younger Beast who is caught in such an extraordinary circumstance. Jean Grey is bombarded with images of her future self and actually experiences the deaths of her older self. The audience is right there with her, experiencing a sense of overwhelmedness with the young Jean Grey. As Angel begins to worry why his older self is not present in the future, knowing what is in store for him and all the ways a young Warren Worthington III might react only delivers more delicious suspense to the story. Iceman’s exchanges with his younger self are appropriately light-hearted amongst the emotional muck these characters are up to their knees in.

HEAR: GIANT-SIZE X-MEN #1 was a groundbreaking comic for a number of reasons!  Why did we think so? Listen to the podcast on it!

So what about the HMIC? Head mutants in charge. In a fascinating twist, adult Cyclops is the new Magneto. Magneto is actually his most trusted and loyal advisor. Judging by Emma Frost’s reaction when the duo busted her out of prison, there is a strong possibility the relationship between Emma Frost and Scott Summers will simmer down to something as convenient as a working relationship. Something is up with their powers. Apparently the Phoenix Force left their DNA a little bruised, and now their powers are working either strangely or not at all.

ALL-NEW X-MEN is a wonderful work of art because it causes us to ask questions about our own life like, “how might our teenage selves react if they were to meet us today?” Would they be astonished by how hardened we have become or how far we strayed from what looked like such a clear path of success at a naive age? Perhaps they would be proud and look up to our experience as human beings — for the current members of the past X-Men currently in the future — only time will tell.