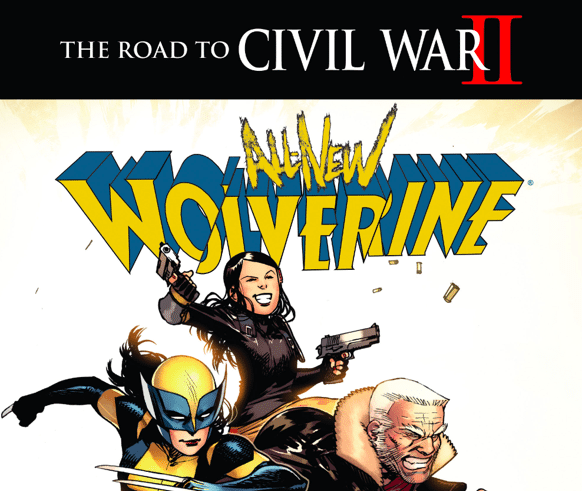 ALL-NEW WOLVERINE #9 by writer Tom Taylor, artist Marcio Takara and colorist Mat Lopes is an absolute blast. It continues with the fun tone of the last issue, but has tons of great character moments and development thanks to a few awesome cameos. Full spoilers for the issue follow, so beware!

When we last saw Laura, she was headed into the stomach of Fin Fang Foom to look for Logan, who had gone MIA fighting the beast. She’s there now, attempting to make a daring rescue. Meanwhile, Iron Man and Captain Marvel both show up to lend a hand. When the going gets tough, Gabby jet-packs over to lend a hand, and through a true team-effort, the beast is defeated. 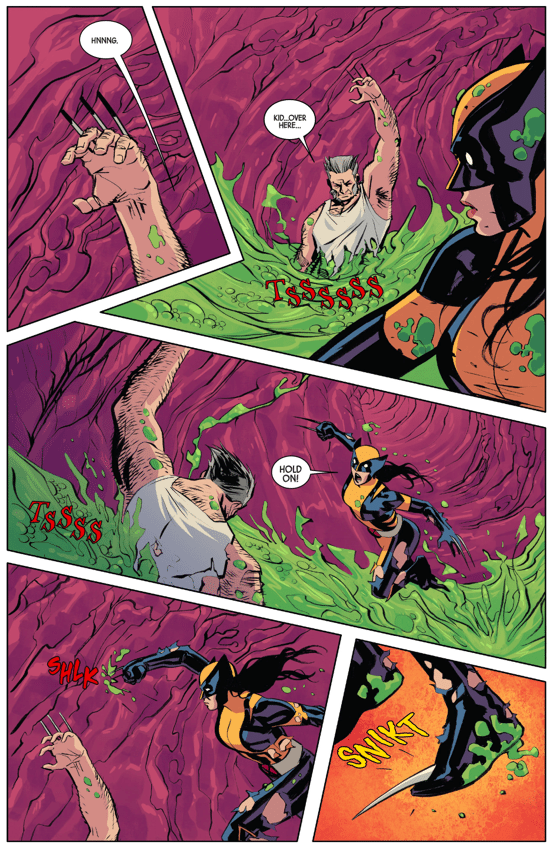 It’s safe to say the creative team really hits their stride in this issue. From the first panel, the issue starts off with a bang and doesn’t let up. Taylor seems to have a great hold on these characters, and his work here is quite possibly the best in the series yet. Laura is, for lack of a better term, a total badass. She rips through that dragon, rescues the former Wolverine, and figures out how to take care of their dragon problem before Iron Man and Captain Marvel even have a chance to realize what’s happening. She is extremely worthy of the Wolverine title, almost to the point where it wouldn’t be a bad thing if Logan never took the reins again and just stayed old forever.

READ Did you see X-MEN:APOCALYPSE? Check out our full review!

While the issue may not be totally game-changing and character redefining, Taylor finds a way to make it fun and light-hearted while still bringing a lot of emotion. It’s a little off-putting to see Iron Man and Captain Marvel working together the same week that CIVIL WAR #1 drops, but aside from that, the main players in the book all shine. Gabby is so eager to help that seeing her flying around on a jetpack is almost adorable and says a lot about her relationship with Laura. She really is like a little sister, only wanting to help Laura any way she can. The book also has its fair share of funny moments, from the thought of freezing while jet-packing naked to Tony’s puzzlement at a dragon being attracted to Laura. Taylor has found a great balance in funny and sad by taking these characters in a poor position and having them find the best in it.

Thanks to a last-page revelation that Logan apparently raises Laura in the very apartment in which they stand, the entire dynamic of the book shifts drastically. Thankfully, it doesn’t feel out of place at all. It’s sure to leave readers eager for the next issue. Could it really be true that Logan, Laura, and Gabby are all about to live in the same place and fight evil together? It almost seems to good to be true. The pacing is strong with this series. and after a two-issue stint with a dragon, it’s already moving on to the next big storyline without feeling rushed or under-told. 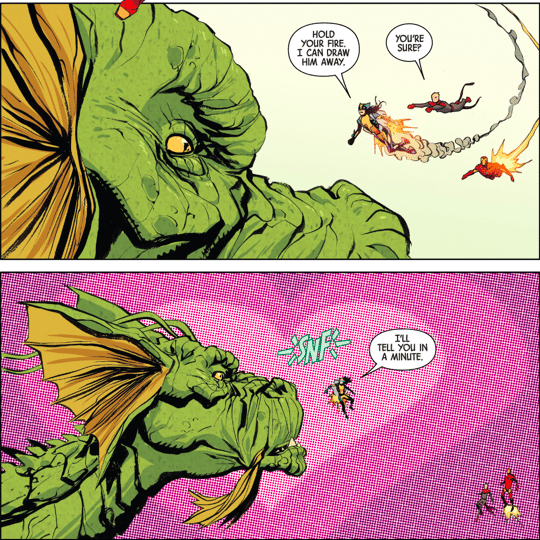 It is hard to compliment this book without giving all of the credit to the art team. The book is all-out eye-candy. The bright and vivid colors make the book different from anything else on the shelves and really compliment the fun style of storytelling. The purples, blues and greens jump off the page and are hard to turn away from. Action sequences are big and filled with detail, and the small character moments are emotive and down-to-earth.

In a lot of ways, this should be the standard by all superhero books are made when trying to be fun and character-driven. It’s got beautiful colors, an action-packed story, and brilliant dialogue that brings its characters emotion and personality. If the series sticks with this tone, it’s going to be a while before anyone gets tired of it.