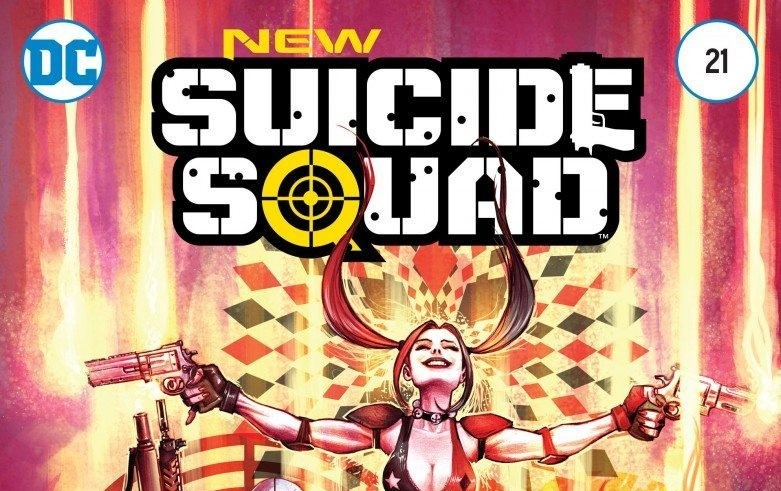 NEW SUICIDE SQUAD #21 brings an end to the latest story arc for Amanda Waller’s merry mix of misfits and murderers. Seriously, the last page even says “THE END” at the bottom!

Beginning with NEW SUICIDE SQUAD #17, the storyline has had its twists and turns for the newest group of active agents. While on a mission, Deadshot, Harley Quinn, Cheetah, and El Diablo were gunned down by another group of assassins, the Mercs. It turns out that Adam Reed hired the mercenaries and staged the Suicide Squad’s deaths so that he could trap both the Mercs and the Suicide Squad so the Fist of Cain could kill them and gain “points” for doing so. From there, it was a fight for survival, especially when Rose Tattoo, the resurrected goddess of murder, embodied a young woman. Hell-bent on saving her team and reputation, Amanda Waller assembled a second group and ventured off to save her team. On arrival, she is captured by Reed, who wanted to murder her all along and gain the most “points”. The stage is set wonderfully at the start of NEW SUICIDE SQUAD #21 with the squad in peril. El Diablo, Harley, and Cheetah are fiercely engaged with Rose Tattoo. Meanwhile, Waller is unconscious and Deadshot is considered dead. 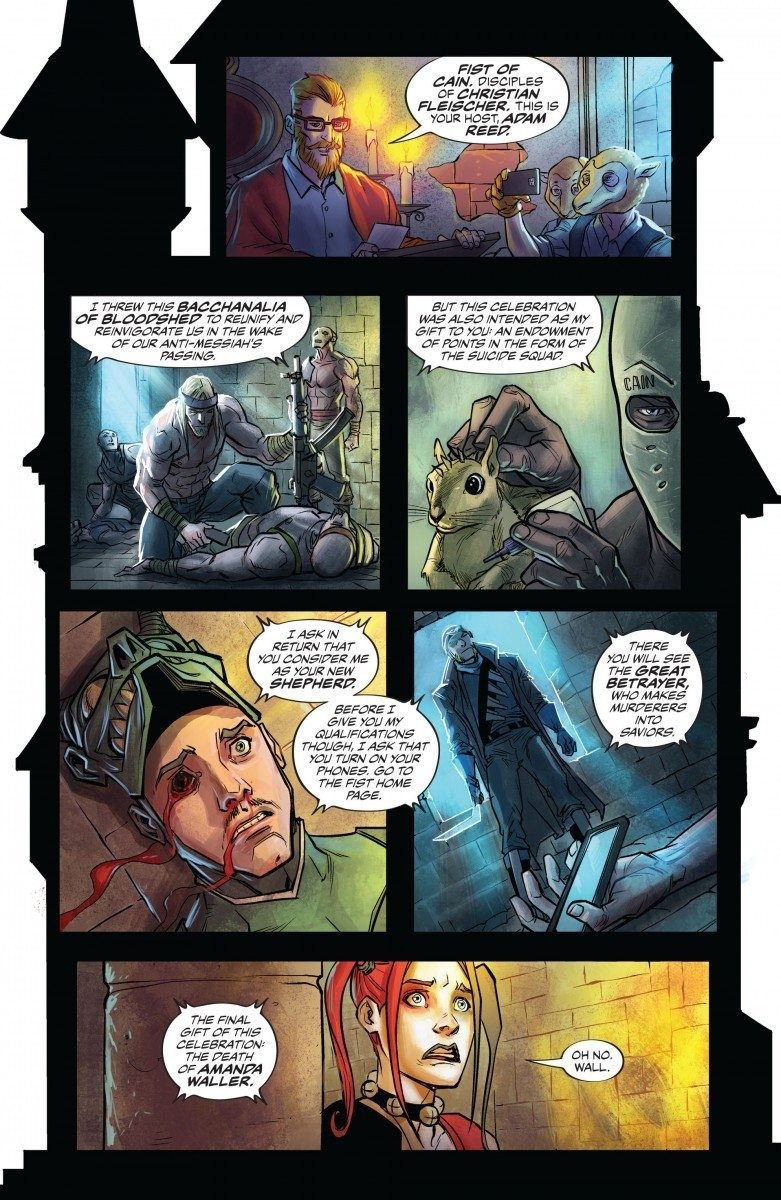 I like how well the danger is amplified in the issue, coming off of four issues to build it up. Tim Seeley writes a story and cliffhanger for all the members of the Suicide Squad, which makes for strong storytelling. This issue ends the storyline the way a conclusion should, with the cliffhangers wrapping up perfectly. The story quickly leads to the climax with the Fist of Cain discovering that Deadshot is not actually dead, Harley and Cheetah taking out more of the Fist of Cain, El Diablo showing off the extent of his pyrokinesis, and Captain Boomerang doing more than throwing his signature weapons (they’re boomerangs…obviously). 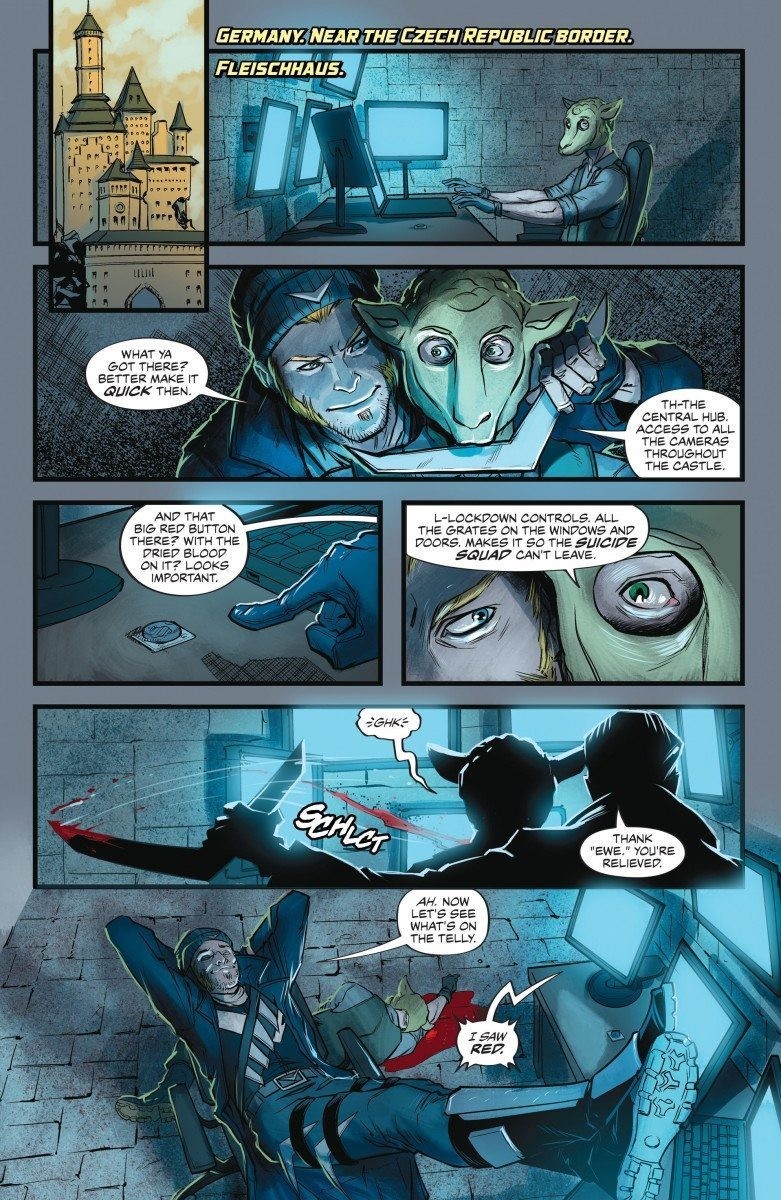 I find it impressive that every member of the squad receives attention to their character and story. Normally, it feels as though a character in the series gets little or no exposure and, as a result, the storyline seems to disappoint. This is not the case for this storyline. My personal favorite is Deadshot’s character in the story arc. He has a death wish but it carries the stipulation that only a worthy foe can kill him. He grows close to the Mercs leader, Deathtrap, and finally decides to die alongside him (a worthy enemy). However, Boomerang saves Deadshot, while ironically thinking that he is forcing Deadshot to “owe him one” by doing so.

When it comes to superhero team-up series, I am usually interested in seeing how the artist depicts the individual group members. Juan Ferreyra’s art in the issue does a great job at capturing the unique look and feel of the Suicide Squad. The highlight of his work in the issue is El Diablo. The tattoos and the flames are the aspects that define the character and they are drawn and colored intricately. However, NEW SUICIDE SQUAD #21 has its’ disappointments in terms of the art. There are many members of the Fist of Cain throughout the issue and they look pretty bland. Many of them wear sheep masks that look generic and uninteresting, which doesn’t work for me. 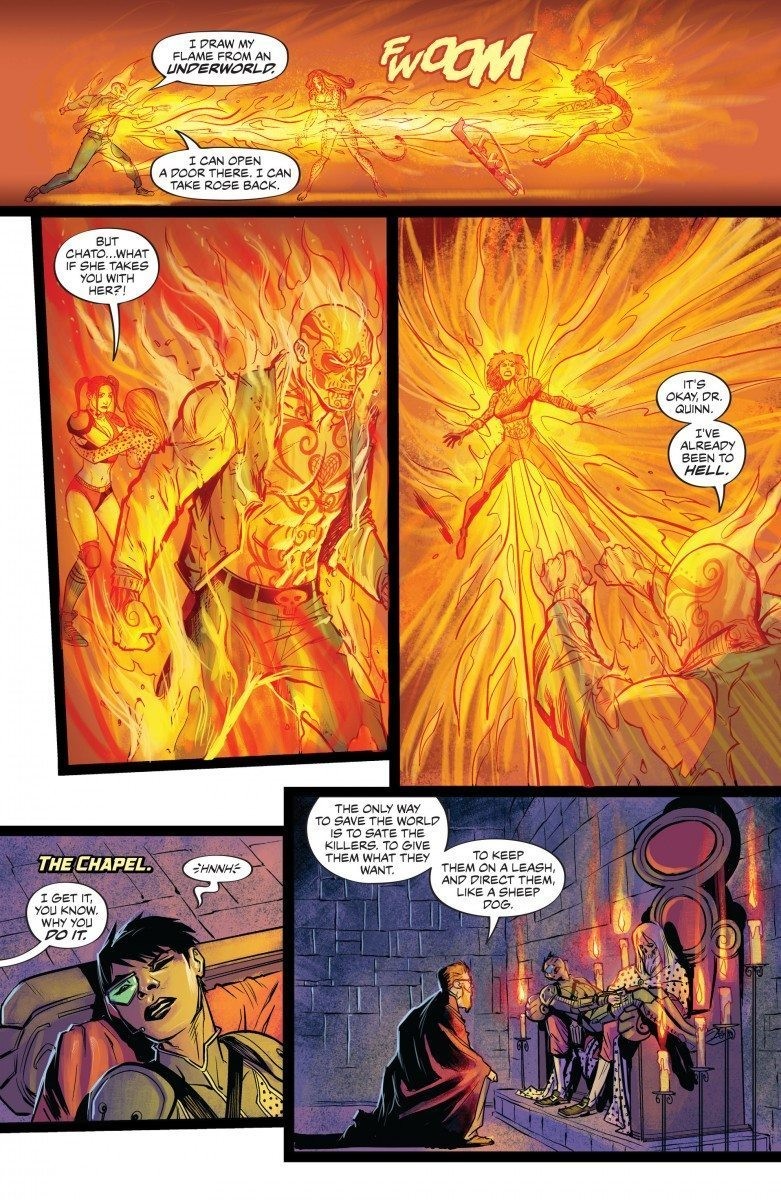 Overall, I enjoyed the storyline and found the ending to be fitting, as well as fun. What really drives the storyline, and this issue, are the surprises and attention to each character throughout. I look forward to the next installment to the NEW SUICIDE SQUAD and I hope that it is written with the same quality as this issue.