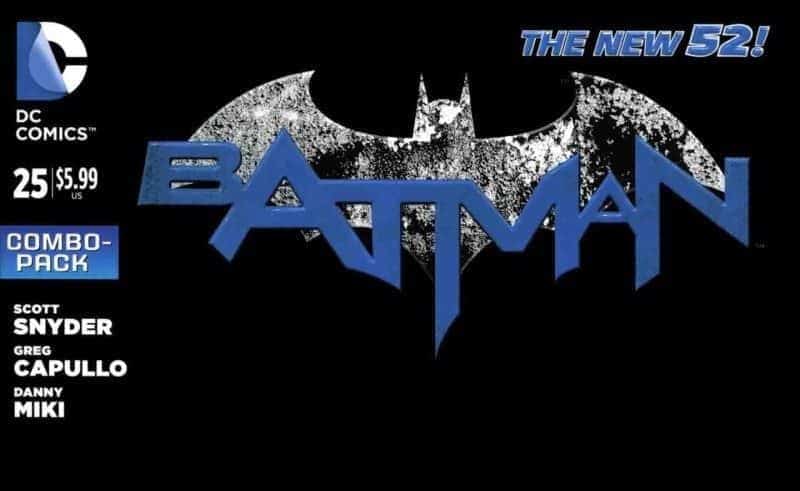 Instead of being given a random comic and then dropped into an odd on-going story where I stumbled around a wee bit lost, I has the good fortune to be delivered the start of a new tale and the second issue too–Issues #24 and #25, for all you number fans. Within this new revamped DC universe (The New 52) BATMAN: Dark City, by Scott Snyder and Greg Capulo, Dark City Pt.1 (#24) begins with the beginning of the end of the Red Hood gang with a fair few homages to famous scenes from the past forms of Batman are “nodded to” quite frequently and excellently throughout this issue by Greg Capullo and Danny Miki. It looks and initially reads great but there are a couple of problems I have with this comic. My initial one is Bruce’s new haircut. Yes, I know that this is a younger Bruce Wayne and he is still finding the right balance between his two lives, but Bruce is looking more like a square-necked super soldier than a Billionaire Playboy; the deus-ex machina with the night vision goggles. Alfred is a pain in the arse (yes, I said it). But finally, my biggest hang up with this issue is the fact that its namesake–“Dark City”–only explodes near the end with Edward bringing Gotham and the Batcave into absolute darkness. Please don’t misunderstand me. I thought it was great when it happened, but it’s a shame it happened about five pages from the end. Turning to #25, Dark City Pt.2, which starts with American troops in Nigeria stumbling on a trapdoor in the middle of the desert, we are quickly transported to Gotham City with a rather grotesque-looking huge, distorted human skeleton (pain written across the victims face) is located in a large greenhouse were a Miss Isley is traumatised as she knows this victim. We see the residents of Gotham attempt to live without electricity any way they can as the Power companies wor- force attempts to fix The Riddler’s rather dastardly deed of destroying the main power lines for all of Gotham. One shining light in this issue is seeing that between Lt.Gordon and Mr Wayne it wasn’t all sweetness and light; Bruce at one point is an outright cock to Gordon even mocking him and tempting him to look inside the outside well to the Batcave; before he unleashes a cloud of bats into his face. This I liked a lot, I was over the moon to see these steps of their relationship were rather rocky.

I do have a couple of concerns across the New 52 Batman comics, I feel (on occasion) I’m being fed the same meal I’ve paid for in the past, enemies are known to me and I can see what’s around the corner this leaving me slightly peeved at it all. I understand clearly what DC are doing by launching Batman again to bring it right up to date with today’s comic buying audience, but that doesn’t take the taste of old food from my mouth. My other concern however is fairly large, which is that these comics were fairly forgettable. I enjoyed them, but after I’d read them and came to do this review a couple of hours later, I couldn’t remember what happened; I had to launch the issues again on my Nexus7 and re-read them before I came to this review. I’m unsure what’s caused this in these Batman comics as I can still remember key moments from previous Batman titles. It could be age catching up with me or it could be a simple case of a New Shoes situation, which is they look great but as they are new they’re slightly uncomfortable and all they just need is breaking in before you can properly enjoy them.

Other than the above concerns these comics are great to pick up to get your Batman fix. Go part with your cash.