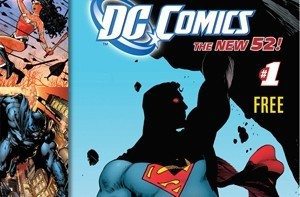 In DC’s the New 52 Justice League Geoff Johns makes some really interesting decisions about how to reintroduce us to heroes that anybody’s grandmother could give at least 5 sentences about. When launching New 52, that was quite a challenge for DC’s writers. How do we make this “new”? How do we tell this story again in a way that will keep old fans loyal and develop new loyal fans? That is tough.

Realizing that DC was onto something with the New 52 and had some success, Marvel (at whose expense some of DCs success came) decided to do their own “Flashpoint” (DC) alternative in the form of Avengers versus X-Men where they whipped out the good old Phoenix and an easy half of the Marvel Universe and brought their Marvel to a crescendo. While it still stands for them to use the Phoenix Force to destroy or otherwise reboot the Marvel universe (that’s my theory anyway), Marvel Now! is a reality in the wings.

In other words, if you were living on a lunar penal colony from 2010 to 2013, when you returned to Earth slobbering over the prospect of eating a steak, kissing a girl (or boy), and getting back into the comics you were reading at the time of your incarceration…you might feel a bit lost. Just to be clear, steak and kissing wouldn’t be the issue, it would be the comics.

Well, for better or worse those changes in comics are done or beyond the point of no return…well, as done as anything ever is in comics. Any publisher reserves the right to say ‘yup it was all a dream brought on by the evil Dr. Dreamytime’ but we all know that such maneuvers are weak sauce.

Digression: a note to publishers out there – readers really respect you when you make a decision and stick to it. If you’re not going to do that, then at least experiment in the good old “What If” format. We can handle it if you kill off someone we like, just make it good and make it stick. Okay, resume thread.

So accepting that the past has been washed away and that this is the new comic landscape, I find myself wondering, “why stop there?” Don’t get me wrong, the advent (or evolution) of digital comics is pretty amazing, as are motion comics, and the ever increasing variety of titles, genres, and to an extent, diverse characters. Across the spectrum of publishers there are some really great titles to explore that break molds. Despite all this goodness, the comic formula still hasn’t been changed enough. If you wanna throw cool stuff at me, don’t throw my PB&J at me, throw me a new sandwich that is gonna challenge me sensually.

In the spirit of change, renewal and evolution, here are some whacky ideas that I’ve either seen or I haven’t (yet) that just might not-suck enough to stick:

Is that Batman I smell?

Why don’t Batman comics smell a bit like sweat and leather? What are you reading over there Jim? What, can’t you smell it, this is a Batman comic! I don’t know many buyers who don’t keep their books in sleeves, so the smell could last a long time. Besides, chemical odors are pretty cheap, right?

Why are you Holding that Comic Sideways?

Wouldn’t it be cool if a comic could feature a guest artist in a centerfold. Yes, that’s right, feature art other than the cover! This could be a great way to see art from international artists, or just new takes on old characters. I would think publishers could get behind this because readers could chime in on what they like and what they don’t. It’s built in market research!

In the back of some of the early New 52 books I saw explanations for some of the equipment or armor being worn by the characters in the book. I also recall when Marvel put out a pre-hardcover collection of stats about their characters. Hulk can lift X, The Thing can lift Y. Sure it was corny, but how about disguising them as dossiers at the backs of the books, like a made up blog written by some guy who saw Spider Man do this certain thing. It kinda helps the real geeks get a measure without having to bog down precious story-telling time with technical details. The dossiers could even refer to particular events in that given issue! How cool!!!

Take everything I said in Part 1, and instead of putting it in the back of the issue, actually have a blog or website specific for that book that chronicles what fictional observers observe. Then you could make advertizing money publishers, which might keep those newsstand prices down.

Organic Cells: Thinking Outside the Box

Yeah, that’s right, comics go organic. I don’t mean that they are more nutritious or a good source of daily fiber, I’m talking about the shapes of the cells. I’m soooo bored with rectangles inside rectangles on rectangles. Ooh, wait, that one was a square! I would rather be challenged with more flow in the cell shapes. I’m not saying it hasn’t been done (see New 52 Swamp Thing) I just want to see more thinking “outside the box”.

Why not more books that are written as prose? Poetry? Why not discover a new meter for speech in comics? I sometimes think that we have forgotten that there really are not rules in literature other than that you must communicate something to me that I care about. Beyond that, speak to me in new ways, new language, long soliloquy, limericks, or code. Remember de-coder rings? Sorry, just gave away my age a bit there. Talk in thought bubbles only. Narrator only. No dialogue for several pages. But yeah, you get it, right? Reinvent the writing. Reinvent the relationship between the writing and the drawing.

Why does all of this matter to readers? Well, we are a large demographic who like good storytelling. Storytelling in comics is rather unique, where words and images come together in a paced series of cells. It’s serialized, it’s backbone is character development, and it’s very important that each character or book or issue be something unique and interesting. The lazy writer makes a lazy reader and lazy readers go find something else to do. The easy-artist makes for sloppy viewers who are easily tempted away by better-than-that artwork. Readers want to see publishers compete for our attention and that’s going to take serious cooperation between writers and artists, editors and publishers, marketers and webmasters. I leave you publishers with this last thought:

We the reader, in order to spend our hard earned money, establish loyalties, and ensure artistic integrity hereby wish to be romanced by you. We the readers are legion and for our part we are willing to be challenged. You the creators (pen, ink, type, word, concept, flair, and on and on), for your part, you must challenge us. With respectful acknowledgement of your efforts thus far, let’s really reinvent comics together, artist and viewer together.

See you in the comics!