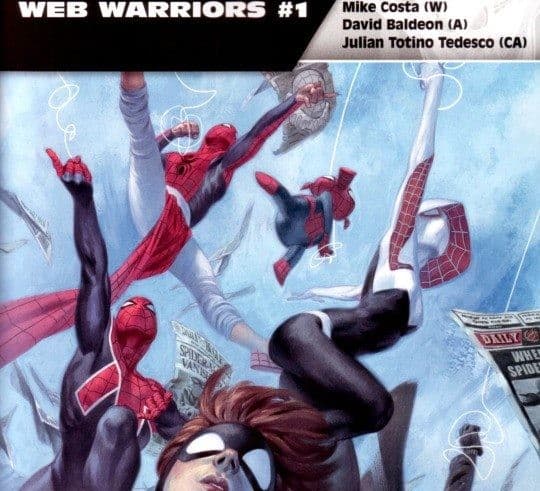 Even as the SECRET WARS mini-series and it’s universe-merging tie-is continue to dominate Marvel Comics’ output through the summer, we’re finally starting to get a clear idea of what the Marvel Universe will look like in the fall when the event dust settles. One of the more interesting title teasers that’s been released so far is WEB WARRIORS.

When looking over the list of leaked Marvel titles yesterday, this one really caught my eye. As a big fan of Spider-Gwen, and to a lesser extent the other SPIDER-VERSE created spider-characters, I was very nervous about how and even if they would exist in the new post-SECRET WARS Marvel Universe. The conformation of this series answers the latter question concretely. For the former it’s a bit less clear, but I believe that the “defenders of the Spider-Verse…” tag-line” strongly implies that these characters will still be from their original alternate universes as opposed to a having newly created backstories that shoehorn them into one single Marvel Universe. If I’m reading into it correctly, that’s a major revelation as it confirms that there will at least be some remnants of the previous Marvel Multiverse come October. It also means that alternate universe characters like Spider-Gwen will be able to at least visit whatever the main Marvel Universe is coming out of SECRET WARS.

Beyond the major universal implications, I’m quite excited for this series to see these characters back in the same book. Assuming this is a team book (as opposed to an anthology) I greatly look forward to reading these characters interacting with each other on a regular basis, especially Spider-Gwen and Spider-Man UK.

WEB WARRIORS, like the rest of the “All New, All Different Marvel” will launch this coming October. Stay tuned to Comicsverse in the coming days and months for more news and analysis of Marvel’s new direction.