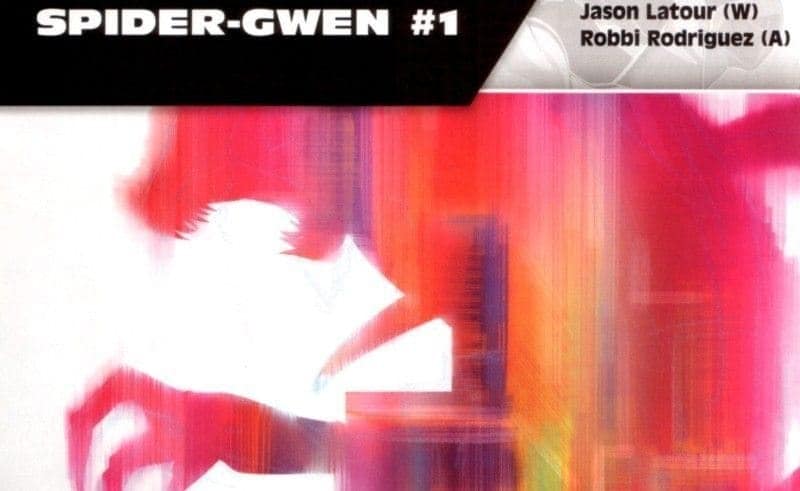 Even as the SECRET WARS mini-series and it’s universe-merging tie-is continue to dominate Marvel Comics’ output through the summer, we’re finally starting to get a clear idea of what the Marvel Universe will look like in the fall when the event dust settles. While there are a slew of new series and new creative teams, some relaunched seemingly exactly where it left off, one of which is the titular book of Marvel’s 2014 breakout character SPIDER-GWEN.

Helmed by writer Jason Latour and artists Robbi Rodriguez, the same team that’s handled Spider-Gwen since her debut in 2014’s EDGE OF SPIDER-VERSE #2, Marvel’s relaunched SPIDER-GWEN series looks to be more of the same. The promo art features Gwen in her Spider-Woman costume surrounded by billboards calling for her to face justice for her perceived roll in the death of her universe’s Peter Parker. The whole image is bathed in the shadow of The Lizard (alter-ego of the deceased Peter) and the theme is driven home by the promotional tagline “The Secret History of Gwen Stacy and Peter Parker.” On the surface the image clearly shows that at least the first arc will focus on the SPIDER-GWEN universe’s Gwen Stacy/Peter Parker relationship. On a deeper level, it also seems to confirm that Gwen’s distinct alternate universe will continue beyond “Secret Wars”.

As an ardent fan of Spider-Gwen, both the character and concept, I couldn’t be more excited at the announcement of this series. While I had little doubt that Spider-Gwen would play a big roll in the post-“Secret Wars” Marvel Universe due to her breakout character status, I did fear that the brilliantconstructed alternate universe she inhabited would be a casualty of the event. The art and promo tag for the series definitely assuage my fears in that regard, and seem to confirm that Latour and Rodriguez will be able to continue telling the story they want to tell. Beyond that, the concept of further exploring the relationship between these particular versions of Gwen Stacy and Peter Parker, possibly in flashback, greatly appeals to me, especially after the tremendous job SPIDER-GWEN #4 set up their former friendship and Gwen’s guilt at his death.

SPIDER-GWEN, like the rest of the “All New, All Different Marvel” will launch this coming October. Stay tuned to Comicsverse in the coming days and months for more news and analysis of Marvel’s new direction.