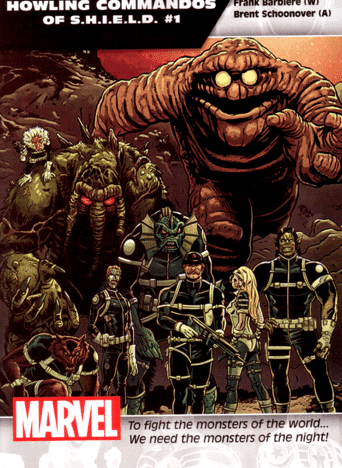 Marvel has just unveiled their post-“Secret Wars” plans in today’s ALL-NEW ALL-DIFFERENT PREVIEWS catalog. Inside this free catalog, Marvel announced 45 new ongoing monthly titles all set to start coming out in October. With these new titles, new creative teams, and new directions, Marvel will surely be shaking things up this fall.

This book looks to have an all-star cast of C-List Marvel characters: Hit-Monkey, Man-Thing, Googam, Werewolf By Night, Manphibian, Elsa Bloodstone, and Teen Abomination joined by S.H.I.E.L.D. veterans Dum Dum Dugan and a newly zombified Jasper Sitwell. Judging by the tagline, it looks like this ragtag group of misfits will be taking on all of the monstrous threats of the Marvel Universe. Marvel have had a long history of monster books, most notably running the title WHERE MONSTERS DWELL in the 1970s which introduced readers to characters such as Googam, who is making his return in this series, and everyone’s favorite sentient tree-alien, Groot. Marvel also ran a tie in to “Secret Wars” under the same title. Hopefully HOWLING COMMANDOS reintroduces readers to some of these fun Marvel monsters. My fingers are crossed for a Fin Fang Foom appearance.

Writer Frank Barbiere, known for his Image book FIVE GHOSTS, is launching this book after a few one-shot stories for Marvel and more recently teamed up with Nick Spencer to co-write AVENGERS WORLD. Artist Brent Schoonover, now known as having one of the most fun names to say in the business, is penciling this book. His most recent collaboration was on the newest iteration of Dynamite’s THE PHANTOM with writer Brian Clevinger. Both these guys are still relatively new to Marvel Comics, so it’s going to be great seeing what they come up with.

With this strange but fun announcement, Marvel really does look like its going in an all-new and all-different direction, and I’m definitely coming along for the ride.