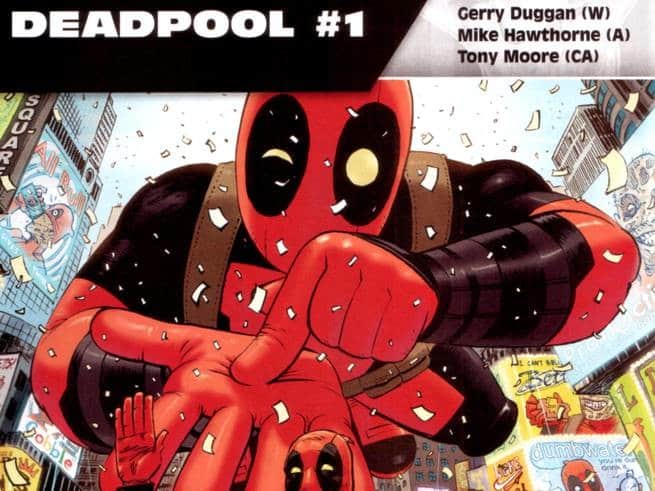 Deadpool, the Merc with a Mouth, makes his triumphant return to All-New, All-Different Marvel!  But will he be more than we can handle?

I absolutely loved the DEADPOOL NOW series with Gerry Duggan and Brain Posehn as the writers. It was by far one of my favorites from the Marvel Now! lineup. The writing duo of Duggan and Posehn did the character justice, to a point I’d argue they had one of, if not the best, runs on Deadpool since the character’s creation. The mix of humor and insanity, character development and serious story lines, while never straying far from what makes Deadpool Deadpool, was phenomenal and perfect.

Deadpool is one of those characters who can go two ways; he’ll either be written superbly, or be handled in a way that makes his shtick go from funny to corny and through to extremely annoying. It also doesn’t help he’s one of Marvel’s overused  properties and at times, his oversaturated exposure in the comic world has been pushed to the point where even as a fan, I’ve had enough of him. I love Deadpool as a character, but if he isn’t handled properly and with the right writer, he quickly becomes an unneeded nuisance (and not the fun Deadpool kind of nuisance).

While there don’t seem to be many details emerging yet on this new run of DEADPOOL, I have complete and total faith in what Duggan will be bringing to the table. The exploration that he and Posehn followed in terms of Wade’s past and inner demons, as well as his relationships to others around him, really helped to build the mythos of Deadpool and allowed for interesting storylines. However, it was never all serious and emo garbage. Deadpool isn’t nicknamed the Crimson Comedian for nothing. Their entire run was filled with well written comedy and solid humor, aside from the usual fart and poop jokes you’d get from Deadpool. I think Posehn’s background as an actual comedian, really helped to build solid punchlines and comedic elements to the series. Even without Posehn in DEADPOOL for this run, I still believe Duggan as a solo writing, will not disappoint for this new series. This is one of the titles releasing under ALL NEW MARVEL that I am extremely excited for and to what extend Duggan will continue to build upon.  With the tagline “More Deadpool than you wanted”, as long as it’s the Duggan Deadpool, I’m not sure if I can get enough.