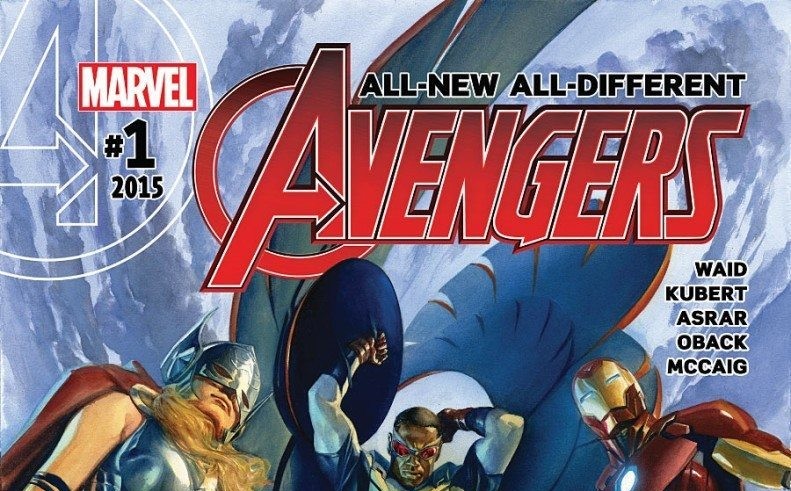 There are a lot of super hero teams, but there can be only one who can carry the legendary title of The Avengers. Can this mismatched group step up to the mantle?  Read on to find out!

‘And there came a day, a day unlike any other, when earth’s mightiest found themselves united against a common threat…’ We all know the drill. It’s been there since the very first time the Avengers assembled. Here, though, we have something unique. For all the Avengers titles coming out of ANAD Marvel, there may not be a true Avengers team right now. This book aims to solve that, though not right away. We have to see who the potential candidates are first. In this first issue, we get two stories from Waid: the first is drawn by Adam Kubert while Mahmud Asrar takes on Ms Marvel and Nova meeting for the first time.

READ: See what Sam Wilson gets up to when he isn’t avenging in our review of CAPTAIN AMERICA: SAM WILSON #2!

In the first story, the action begins almost immediately, with Cap saving a family as their car topples off the Queensboro bridge. However, and harking back to his own title, his heroic act nearly dovetails into an issue of race, before Sam drags Tony Stark into the proceedings.

Meanwhile, in a recently sold Avengers tower, two villains conspire to destroy the world. Thank God we have Miles Morales, the Amazing Spider-Man to…ooh he’s just been thrown out of the building. 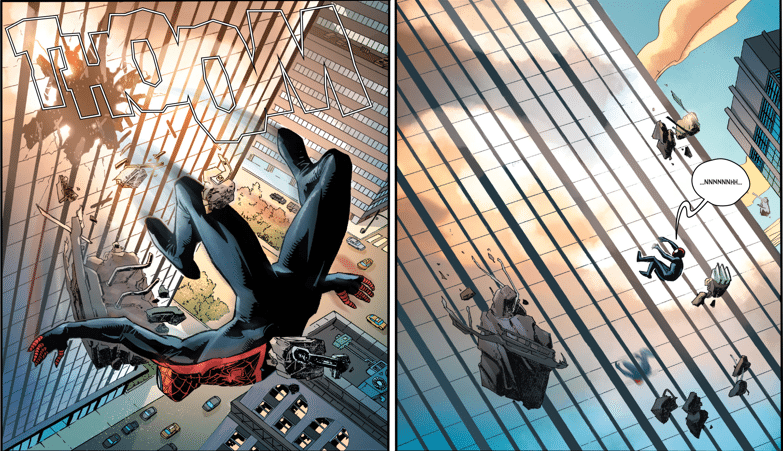 Having just come off the mini series AMAZING SPIDER-MAN: RENEW YOUR VOWS (and one of the best illustrated Spider-Man tales I’ve read in a long time) Adam Kubert continues to knock it out of the park with energy and excellent paneling to capture the dynamics of the action. He compliments Waids humor in the storytelling, while also showing what the characters are going through. Case in point being Sam Wilson. You really feel for Cap at times, his face a wave of conflicting emotion as he battles through the tides of Political Correctness. Kubert gets the expressions just right. The coolest moment though, and one that would usually be a huge splash panel, is Tony’s car transforming in to the Iron Man armor. The art is, in a way, practical, no frills, but it helps sell a dynamic moment which is bound to please fans.

The villains of the piece – an unnamed mystery man and a Chitauri warlord who is basically a sore loser – feel a bit pedrestrian. I do get the feeling, though, that the book is not so much about the threat, but the team dynamic. Indeed there is very little of that in this first issue the team is defeated pretty quickly. But any great team has to go through fire to emerge out of the other side victorious.

READ: Our review of AMAZING SPIDER-MAN: RENEW YOUR VOWS #5 here!

Meanwhile Mahmud Asrar helps tell the story about how Ms Marvel and Nova get off on the wrong foot. It’s the classic tale of misunderstandings between heroes, but we also get to see where these misunderstandings come from, and it’s a very funny and human tale. While Kubert and Sonai Oback’s (on colours) art is all about light and shade, Asrar and Dave McGaig — despite the thick inks — give this a much lighter feel, full of blues and moments of (hilarious) embarrassment. 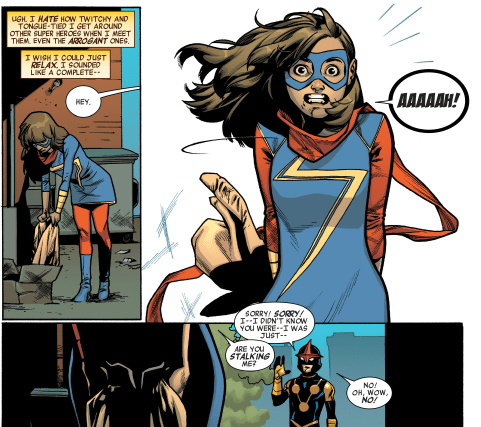 This book is something I have been looking forward to for a long time. After reading a preview of ANAD AVENGERS at Free Comic Book Day, I anticipated that the team would be fully formed. This issue is largely set-up for the future, but ultimately enjoyable for what it does offer: Waid’s writing is good, the art is fantastic, and while Waid seems to be playing the long game for now, once these Avengers finally come together, this book could easily soar to great heights.

READ: Our preview of ALL NEW ALL DIFFERENT AVENGERS #4!

READ: Check out more REVIEWS from the ComicsVerse crew!