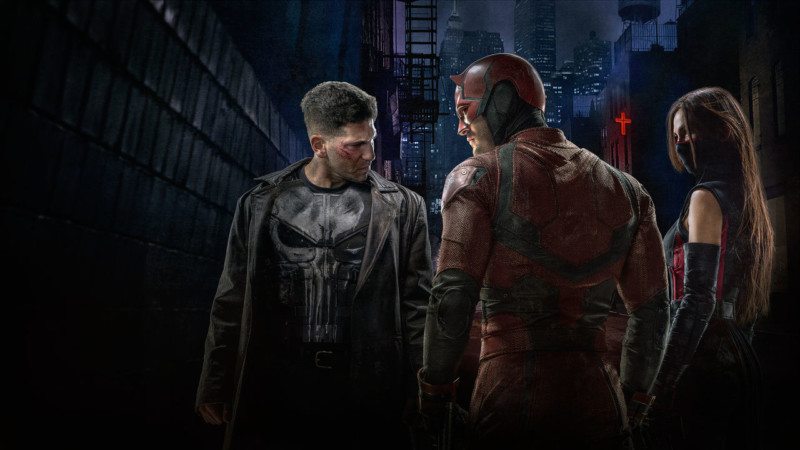 For the past year and a half, MARVEL has been dishing out the glorious platter when it comes to television content. Subscribers to Netflix are now no stranger to the MCU as much as the next schmuck down the street. It’s almost an unavoidable pleasure at this point. With films out almost every solstice and shows overlapping at the speed of light, comic book fans can only raise their battered heads to the heavens and rejoice! Not only does serialized television reserve the right for additional room when it comes to content, but it also leaves so much up to specific style. Netflix’s MARVEL shows have taken wonderful strides in stylized experimenting that DC’s cable series’ can only dream to access. JESSICA JONES built upon a slow burn layer of noir while LUKE CAGE gave us a hefty dose of blaxpoitation and cool. Fans are rightfully anticipating the gritty, Hong Kong crime fusion of IRON FIST soon on its way. However, neither of the previously respected shows have yet to live up to the initial grandeur and execution of MARVEL conceptional attempt: DAREDEVIL.

That’s right folks, it may seem like such a straightforward argument to give so much glowing praise to the show that started it all, sure. But let’s give credit where credit is due, the show deserves your unbridled attention more than most shows on Netflix in general (maybe not STRANGER THINGS, but that’s not fair, let’s move on). The case brought on by that idea is that all future MARVEL shows, and comic book adaptations on television in general, can take a few lessons from the Man Without Fear himself. However long MARVEL may continue to dish out excessive content for the next bajillion years, they can always look back at where they first began in order to “get it right.” And boy oh boy, did they certainly do just that with the first two seasons of DAREDEVIL.

READ: BATMAN: WHERE GOES MY HERO?

The first thing that comes to mind when discussing the series is the word “unconventional.” Not only has Matt Murdock mastered his senses and honed his martial arts to become an effective vigilante (albeit sans the outfit) by this time in the show, but we are only given his beginnings and origins piecemeal through almost two full seasons. That, right there, is patient and effective storytelling. Thankfully, both succeeding Marvel shows did a fantastic job following this proper approach to a tee. This day and age, we’re tired of waiting two hours into a film or four episodes into a six episode television show for our hero to finally become the “hero,” we want to get what we bargained for. “You want Daredevil?” says the shady Netflix kiosk man with gold teeth, “you get Daredevil. $8.99 a month, please.”

Not only is Murdock already fully established and three dimensional by the time we meet him, but MARVEL’S DAREDEVIL succeeds in what I like to call, “the one-two episode punch,” which deals directly with tone. Most television shows, today, struggle from an imbalance of direct emotional atmosphere over the span of episodes or seasons. Some may introduce their worlds in one tone directly and then shift in a very confusing way down the line that can, possibly, throw the show off the rails. Even iconic series’ such as BREAKING BAD suffer from this trend early in their initial episodes. Some may attribute this to a show getting its footing writing-wise or even financial constraints due to budget. Regardless, DAREDEVIL succeeds in avoiding this hurdle altogether.

Right off the bat, from the beginning of the very first episode, the audience is introduced to a much different superhero tale. Instead of a simple man witnessing the death of his parents or training at the hands of his stern mentor, we get a vicious and brutal homicide scene. Already, from this very bloody and startling opening, we know we are in for something incredibly unique. From these introductions, we witness a bleak, and decayed Hell’s Kitchen; swarming with bloody thieves and thugs of brutal intent. It is a world beset with rampant brutality that almost gives no quarter. That is what makes its style so much more effective than others: it is simply unrelenting. While the visions displayed by JESSICA JONES and LUKE CAGE hold ground through technical aspects (i.e. color, camera work, costumes, etc.), the overall tones seem to shift constantly from light-hearted to dark with very distracting movements. While DAREDEVIL is not without humor (in fact using it brilliantly in times of much needed levity), it certainly holds onto its dirt-covered upbringing with much more gusto.

Question time: what is a show without a stellar cast? The answer: a show without a stellar cast. Is that a show worth watching? Maybe in MARVEL’s realm, absolutely. The stories are interesting enough and with decent, magical spectacle. Why even try that hard to cast people with exceptional range and talent? DAREDEVIL says to this, “That’s cute.” True to form, the cast of this show, especially with regards to its villains and supporting cast, are phenomenal by comic book television standards. Charlie Cox’s Matt Murdock is flawed yet charming, and Deborah Ann Woll, Elden Henson, and Rosario Dawson round out a side character roster that supports the show with doses of levity, hope, empathy, and realism. However, two performances stand out above the rest that truly propel the show into skyrocketing speeds. These mentioned are Vincent D’Onofrio and John Bernthal as Wilson Fisk (Kingpin) and Frank Castle (The Punisher), respectively.

Season 1 took a swan dive into sublime entertainment once Kingpin entered the ring; giving the audience a villain that they would never truly forget. D’Onofrio’s performance was that of a small child with serious issues stuck within the imposing frame of a hulking mastermind. His layers drew hints of grace and rage all at the same time; a sadistic villain that was truly a class act. While his initial absence in Season 2 was deservedly missed, it was soon and quickly dissipated by the arrival of the Punisher himself. After two interesting, and failed, attempts at bringing the character to live-action, most fans today can join hands in agreement over Bernthal’s more-than-satisfying interpretation of the beloved character. His take is simple: Frank Castle is a man blasted, destroyed by the inflicting horrors of his past, and now only a mere husk of a man with a single, blunt mission. His Punisher is without hesitation, almost automaton at initial viewing. As episodes continue, he only begins to shed upon a deeper light buried so far within a miasma of anger and vengeance. It’s a performance that truly takes the show by storm into a realm no other comic book show may ever see. Unless, that is, they just hire a better actor.

WATCH: FANDOR- THE EVOLUTION OF THE COMIC BOOK FILM

Admittedly, one could trudge on and on about what makes DAREDEVIL such a great and effective show. Overall, it seems to be boiled down to its sense of groundedness (did I make that up? Probably. Whatever). This strong foothold seems to cement itself in a thick layer of reality created by the show that becomes entirely believable, no matter how ridiculous the context appears. Whether it be its performances, its tone, or its simple and well-crafted story, DAREDEVIL keeps its feet no matter where it lands. Sure, you can argue the ending to Season 2 was a biiiiiiiit too ridiculous to keep up this veil of realism, but the counter-argument suggests that at least it built up to something grand to begin with. The whole ordeal brought upon by the Hand did throw the show off balance in a way that almost did not make sense tonally speaking, but it’s nothing to really gripe about too much.

So, with that in mind, go watch MARVEL’s DAREDEVIL on Netflix and proceed to not have any show live up to its potential after that. Have fun!