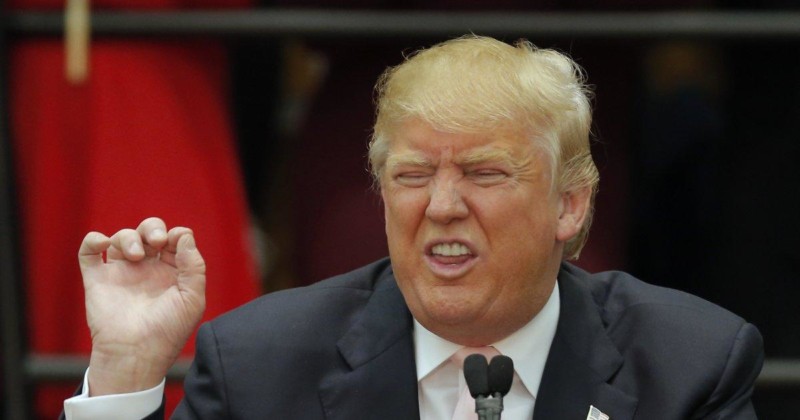 The Cheeto in all his petulant glory

Donald Trump and his cabinet have made no secret of their stance on Net Neutrality. In order to understand Net Neutrality, it helps to understand why it’s important that the internet remains a neutral commodity. For example, in a country without Net Neutrality, such as China, your internet service provider or government might block you from reading the following controversial content. Enjoy.

“If you see somebody getting ready to throw a tomato, knock the crap out of ‘em, would you? Seriously. OK? Just knock the hell—I promise you, I will pay the legal fees, I promise, I promise.” (Donald Trump, Cedar Rapids, Iowa, February 1, 2016)

Members of the audience, I present to you THE PRESIDENT OF THE UNITED STATES OF AMERICA! That right there is the man who represents America and it’s citizens. How does that make you feel? Well 38% of Americans still approve of him as of the 15th of May 2017, so he must be doing something right… right? Arguable, but I think he’s a bumbling putz. So does Germany.

Speaking of Germany, their unpopular chancellor has been pushing to deregulate Net Neutrality both in Germany and in the EU. Net Neutrality is a set of laws that gives us freedom on the web, and Donald Trump is threatening that freedom. His administration is pushing us towards a cliff that some countries have already fallen off of.

Countries including Germany and Chine do not enforce Net Neutrality. Their citizens are not happy about it. This screen is what they see on a regular basis when they browse YouTube:

…If they even can browse YouTube. YouTube is one of the many websites that is completely blocked on the Chinese internet. China is an extreme case of internet regulation. Their censorship is so bad that it’s been nicknamed The Great Firewall. China has the largest population of imprisoned ‘netizens’ in the world according to Wikipedia. Anybody who disagrees with the government gets tossed in jail. Anyone who spreads “fake news” gets tossed in jail. Sound scary yet?

Donald Trump’s assaults on the media and on Net Neutrality look a lot like China’s censorship laws. If we’re lucky, he’ll only make watching YouTube videos more annoying. Maybe we’ll get really lucky, and he’ll be impeached before he does any serious damage. However, the threat remains. Trump’s administration is bad news for internet freedom.

Net Neutrality and the Government

During their very first days in office, members of the President’s cabinet began aggressively pushing for the deregulation of Net Neutrality laws. Net Neutrality, for those who don’t know, is “the principle that Internet service providers should enable access to all content and applications regardless of the source, and without favoring or blocking particular products or websites.” In English, that means that AT&T and Comcast can’t choke your internet speed if you go over a certain amount for the month. It also means that companies aren’t allowed to censor what content you access. In short, Net Neutrality is awesome for normal citizens, but corporations think it’s the devil because:

A. They can’t charge you or Netflix extra money to stream HQ movies and

Predictably, Trump’s not a fan of Net Neutrality because he can’t censor all the negativity flying at him. Not that he hasn’t tried anyways.

Any negative polls are fake news, just like the CNN, ABC, NBC polls in the election. — Donald Trump

Trump’s alternative facts don’t stop there. He’s waging a war on science and censoring scientists who work for the government. Climate change? Pfffft, no such thing! It’s not like 97% of scientists agree that it’s a massive friggin problem. Donald Trump calls verified facts and scientific consensus “Alternative Facts” and “Fake News.” Worse still, his administration is hellbent on giving him the power to censor “Fake News” by getting rid of Net Neutrality.

The idea of censoring the news media is dystopian. The media is not perfect, but they do get their job done most of the time. They inform us of major world events, and they make sure that dangerous political scandals turn into a big deal. In a perfect world, they wouldn’t have political agendas, but they do. Luckily, there’s a bunch of different media outlets with competing political views. In the U.S., Fox is conservative, CNN is vaguely liberal, NPR is heavily liberal, etc. At the end of the day, we get a reasonably accurate picture of what’s going on.

Now, imagine that your news was only coming from one of those sources. What if the only news you ever heard about was coming from Breitbart. Imagine that the only source of news in the country was publishing hate speeches and advocating sexism. That would be a scary situation. That’s the country that Donald Trump would just love. It’s the country that he’s working to create as he tries to get rid of Net Neutrality. He wants the power to censor the media as he pleases. Net Neutrality is standing in his way. It is a shield that protects the media from authoritarianism. More than that, it’s a shield that protects your right to access any internet content that you want for a fair price.

The shield of Net Neutrality isn’t going to hold itself aloft. Politicians have no interest in keeping Net Neutrality in place. A lot of fat cats are lining politician’s pockets over the issue. But, don’t worry, this isn’t the part where I tell you that you need to shell out $90 to save the internet. Net Neutrality doesn’t run on money — it runs on popular support. Politicians are scared to eliminate Net Neutrality because their supporters would riot. So, if you want to support Net Neutrality, riot preemptively. Call up your local Congressional representative and shout at them angrily. E-mail them a stern message about Net Neutrality. Make them fear you! Because you’re the reason they have their job.

Whatever else Donald Trump may be, he is a threat to the free net. His brazen support of corporate interests has made it very clear who’s side he’s on. News Flash: it’s not your side. Under his administration, the USA’s internet is on the fast track to looking like China’s. If you like being able to hurl insults at trolls anonymously online, then you need to fight for Net Neutrality. And by ‘fight’ I mean take two and a half minutes to call your congressperson and yell at them or something. You’ll probably spend more time than that watching a video your mom posted on Facebook.