Back when THE WALKING DEAD first graced our screens in 2010, fans of the long-running comic wondered just how faithful this adaptation would be. As a lover of both the show and its source material, I feel I can safely say that the series has done a fairly decent job. Sure, concessions have been made and certain elements were altered in order to make the story suitable for basic cable. And while I wouldn’t say the show has ever measured up to the level of quality achieved by the comics, I believe that AMC’s program is a worthy interpretation of Kirkman’s bleak vision.

Now in the midst of its sixth season, the show’s writers are currently facing their biggest obstacle yet: bringing Negan to the small screen. Anyone who’s read the comics will tell you that this is no easy feat. He’s a baseball-toting, profanity-loving sadist who is responsible for one of the most horrific deaths in the entire series. Going in, I expected certain aspects of the character’s personality to be altered, but I was surprised by the end result. I have issues with Negan’s small screen adaptation and these issues have nothing to do with that which was taken out, but rather the material that was left in. (Warning! Spoilers ahead. Read at your own risk.) 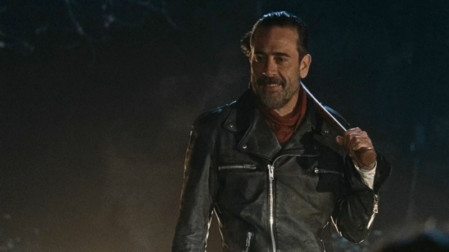 Let’s start off with the biggest difference between Negan’s character in the comics and the show: his dialogue. On the show, Negan’s vocabulary is far from prudish. It seems as though he can’t go two sentences without spewing something offensive or crass. But his words seem tame when compared to his comic book counterpart. In the comics, Negan swears like a sailor who has watched too many Tarantino movies. He spouts long-winded monologues that are riddled with obscenities, including countless variations of a certain four-letter word (I’ll give you a hint. It starts with an F). But basic cable doesn’t allow for such a colorful vocabulary. As a result, Negan’s dialogue needed to be toned down. I was convinced that it couldn’t be done. How can you do this character justice when you are forced to strip him of one of his most defining traits?  But the show managed to pull it off.

The dialogue is on point. Every word the character utters is just so… Negan. The writers have found a way to capture this character’s essence without the use of excessive swearing. The dialogue is well-written and the delivery is impeccable. Jeffery Dean Morgan hits it out of the park (see what I did there?). Negan is a guy you love to hate: He has no redeeming qualities. Nothing about him elicits empathy. Hell, the only things he elicits are feelings of disgust and a handful of begrudging chuckles. This is a larger-than-life villain on par with Hannibal Lecter, Hans Gruber, and every baddie that Gary Oldman has portrayed. Morgan understands this. He chews the perfect amount of scenery without ever getting too mustache-twirly. The end result is some great dialogue elevated by a stellar performance. Regardless of some slight tweaks, this is a faithful representation of the character. But is it too faithful?

READ: THE WALKING DEAD Writers Get Themselves Out of a Jam

Our first introduction to Negan sees him savagely murdering Glenn, one of the comic’s oldest and most beloved characters. While it may be hard to stomach, it is a powerful, gut-wrenching scene that perfectly establishes Negan’s character. Fans have been waiting for this moment ever since season five’s cliffhanger ending. We’ve spent the hiatus wondering if the writers would really go through with it. And in the season six premiere, we finally got our answer. Viewers saw Negan kill off not one, but two main characters. I have to applaud this bold decision. This show certainly needed an adrenaline shot, especially after the last couple of seasons. It felt as though the show had fallen into a routine of introducing new characters only to kill them off a few episodes later. In the season six premiere, the stakes were finally raised and the audience was once again given something to fear. But I must admit, I take serious issue with how the scene played out on TV. 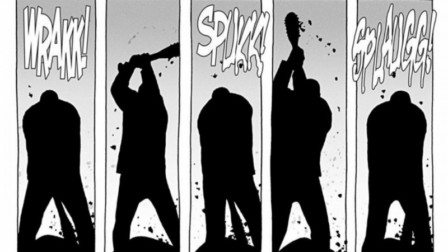 Rather than toning down the comic’s imagery, the show instead depicts the violence in all its horrific realism. Even though this moment is nearly identical to the scene from the comics, it is far more gruesome to see it in this medium. There are a couple of reasons for this. First of all, unlike the television show, the comics are in black and white. A creative choice that not only captures the story’s bleak tone, it also makes the depictions of violence seem less graphic. In addition to this, comic books lack the ability to depict full motion. But on TV, we are able to watch this brutal act in its entirety. We are able to see Lucille swing through the air and collide with Glenn’s skull. Finally, television also has the ability to pair image with sound. While comics rely on words to depict what something sounds like, TV can actually use noise to enhance the images we see. Reading the words crack or crunch isn’t the same as actually hearing them. These are just a few slight distinctions, but they go a long way towards making the violence feel more realistic because they engage more of the senses.

I am not a squeamish person. One of the things that drew me to THE WALKING DEAD was my love of the zombie genre. I grew up on George A. Romero films. I love Tom Savini’s practical effects in all their gory glory. But this form of brutal violence is closer to torture-porn flicks like SAW than it is to Romero’s campy gore-fests. This is different from seeing a rotting zombie get decapitated. We are seeing two living, breathing human beings get their heads crushed. Which may have been excusable if the death served any significant purpose, but the writers were not attempting to remain faithful to the source material or to enhance the plot in any meaningful way. It just felt like a response to the negative criticism they received for last season’s multiple fake outs. The show’s writers wasted Glenn’s death in a desperate attempt to seem edgy. And this was made even worse by the lack of any tension or buildup.

Negan’s game of eeny-meeny-miney-moe helped create a sense of anxiety and dread, but here that suspenseful buildup was used on Abraham. This would have been a fine (although incredibly safe) choice. But the show had to go one step further and throw in Glenn’s shocking demise. Last season’s final scene left us questioning which character had been killed off–a question that would go unanswered until half-way through the season six premiere. Once Abraham died, we were lured into a false sense of security. An illusion that was abruptly shattered when Negan struck Glenn mid-sentence. While the comics had their fair share of shocks, this has never been what THE WALKING DEAD is about. One of the most terrifying/enthralling aspects of the comics is the notion that anyone (except for Rick) can die at any time. A scene that captures this idea far better than Glenn’s death was the episode’s climax: that moment when Negan orders Rick to chop off Carl’s arm. This is a far more effective scene even though Rick does not actually go through with it. Here, it is not the violence that terrifies us, but the suggestion of it. Just like the comics, this scene makes us feel that something horrible lies just around the corner.

READ: THE WALKING DEAD – Why Glenn’s Death is Significant 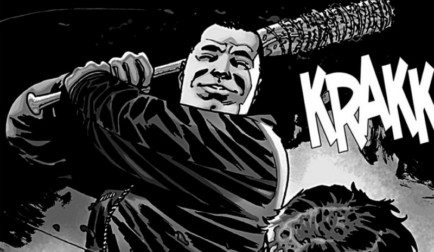 It used to be that whenever I’d hear someone claim that violence in media desensitizes us, I was quick to argue the opposite. But after seeing how THE WALKING DEAD handled Glenn’s death, I am beginning to wonder if they actually have a point. Why did AMC feel it necessary to censor Negan’s words but not his actions? Was it to appease advertisers? If so, would these companies really prefer to associate their products alongside graphic violence rather than foul language? Maybe it was for the sake of any impressionable young minds that may have been watching, because we all know that hearing a couple F-bombs is far more damaging to a child’s mind than watching a man get beaten to death with a barbed-wire-wrapped baseball bat.

The truth is we are desensitized. We may not all be homicidal maniacs, but our culture is clearly more comfortable with depictions of violence than it is with language or sex. It is an absurd double standard in media censorship. Just look at films. Nudity and cursing can give a film an R or even an NC-17 rating. But there are countless PG-13 movies that are filled to the brim with violence and death. I am not saying we need to get rid of violence in media. But we really need to question why we are more accepting of graphic violence than a few dirty words.