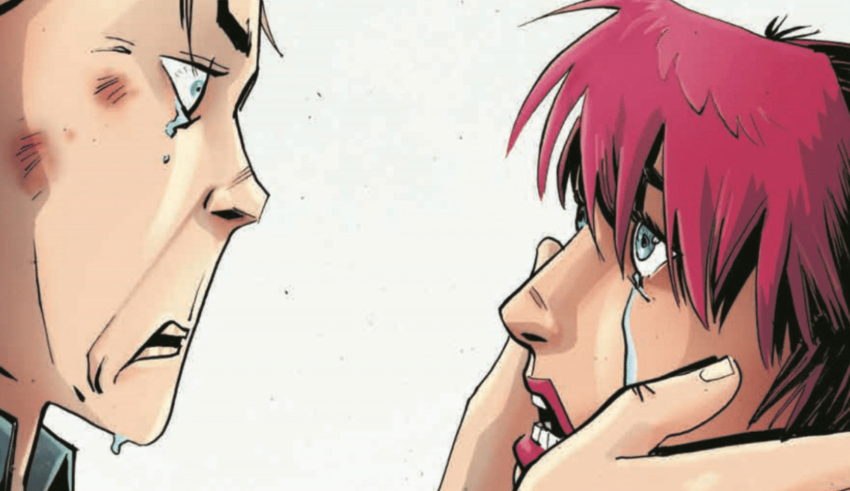 NAILBITER Vol. 5 TP includes issues #21-25 and the HACK/SLASH crossover issue, which provides information on Warren’s past. “Bound by Blood,” the story arc in issues #21-25, focuses primarily on Alice, who has just recently discovered that Warren and Crane are her biological parents. As Finch and Crane track down Alice, they also discover more details about Buckaroo’s past and continue to piece together the mystery surrounding the Buckaroo Butchers.

One of the first images we see in issue #21 is Alice holding a decapitated head without any context. As the title suggests, “Bound by Blood” focuses primarily on Alice as she processes the inevitability of becoming one of the Buckaroo Butchers and the events leading up to her first kill. Since we still don’t know what or who exactly is turning people into serial killers, it’s unclear to us if Alice truly has a choice in the matter. Alice struggles with the same dilemma: can she control her urges or was she born to kill?

READ: Mad for NAILBITER? Click here for an interview with its creators, Joshua Williamson and Mike Henderson!

Given the way she is ferried from person to person in this story arc, it’s easy to see why Alice feels like she has lost all personal agency. First, Alice’s classmates kidnap her and offer her as a sacrifice to “the Saint of Serial Killers.” After they are slaughtered by the Butcher in Black, Alice manages to escape to her home where Warren is waiting. Warren takes Alice to the school’s basement where the Butcher ambushes them. The Butcher kidnaps Alice and tries to convince her to go through the initiation to become one of Buckaroo’s serial killers. By the time Alice decapitates the Butcher, we understand why she feels like she has run out of options. 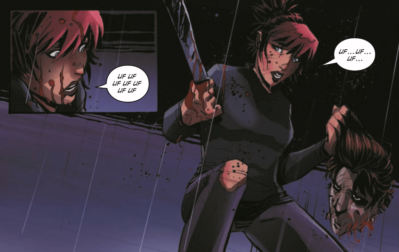 Joshua Williamson and Mike Henderson’s work is especially effective at driving home Alice’s loss of control. All five issues of “Bound by Blood” are told in a flashback leading up Alice’s first kill, after we have already seen her with the decapitated head in issue #21. This narrative technique coupled with the way Alice is shuffled between chaperones adds to the overall feeling of inevitability. In “Bound by Blood,” we witness everything we’ve learned about Alice since issue #1 of NAILBITER come to a bloody, murderous head. Whether or not she was destined to be one of the Buckaroo Butchers, it’s hard to see how events could have unfolded any differently, given Alice’s biological relation to a known serial killer and her growing up in a town that is known to spawn them. Alice’s descent into madness was a long time coming and a much needed violent catharsis for both her and the overall plot of NAILBITER. With the killing of the Butcher in Black, we’re one step closer to finding out who “the Master” is.

LISTEN: Need more NAILBITER? Listen to our podcast episode on the series!

In “Bound by Blood” we also see Warren at his most terrifying. He’s always been charming in the special kind of way only a fictional psychopath can be, and it’s easy to forget that at his core there is something horrifically wrong with him. Warren’s desperateness to have a heart-to-heart with his daughter is unnerving and he does not seem to take into account whether or not this is truly in her best interest. I found it especially chilling when he tells Alice he would have killed her had he known she was his daughter. We are reminded that Warren is unpredictable and cannot be trusted, regardless of how well-meaning he thinks he might be. If Alice is in crisis, one-on-one time with Warren is the last thing she needs.

Williamson does not expand on Crane and Finch as characters much in “Bound by Blood,” since the duo spends these five issues chasing down Alice and Warren as part of their never-ending quest to solve the mystery of the Buckaroo Butchers. I personally found this disappointing since we see a brief moment of vulnerability from Finch in issue #22, where he opens up to Warren about how he feels about returning to Buckaroo. After Warren attacks him, Finch quickly returns to his steely self.

Finch is one of the series’ main characters but we still hardly know anything about him. Sure, “Bound by Blood” is Alice’s moment, but Finch is still in many ways a two-dimensional character. Although we know that he must be a person who feels a complexity of emotions given that he nearly committed suicide in issue #1, we haven’t seen Finch voice or act on any feelings other than anger. This moment with Warren is the most emotionally accessible he’s been in many issues and it’s over all too quickly. Despite this small gripe, it was still wonderful to see Crane and Finch reunited and kicking ass.

READ: Want something scarier than fiction? Click for our article on real serial killers!

“Bound by Blood” delivers the effective visuals we have come to expect from NAILBITER. The series manages to convey flashbacks and moments of extreme violence in a rather cinematic way. Mike Henderson depicts the series’ flashbacks in either sepia or black and white with selective pops of color. Henderson tends to stylize the violence and gore in NAILBITER as if he’s paying homage to the slasher genre. 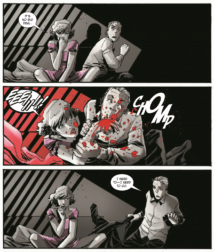 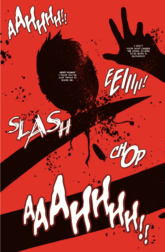 Henderson has an exceptional ability to build suspense from panel to panel and issue to issue. He understands that sometimes what we can’t see is scarier that what we do see, an understanding that is essential to horror. In NAILBITER, it’s not uncommon to have panels that are completely black save for a single speech bubble, or moments where the reader can see the baddie lurking but the characters cannot. The story arc ends dramatically, with four entirely black pages with bold white lettering that indicates the story is “TO BE CONTINUED.” 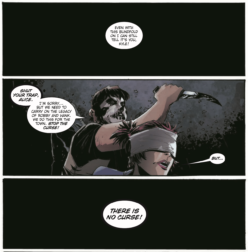 In my opinion, we are far enough along in NAILBITER that it’s absurd that we still don’t know the exact cause of the Buckaroo Butchers. However, I do trust that whatever Williamson and Henderson have in store will be worth the wait. Just as the story arc in “Bound by Blood” was a long time coming, I trust that when all is finally revealed, it will exceed my expectations.

How would do you rate NAILBITER Vol. 5? Let us know what you think in the comments, and if you plan on picking up NAILBITER #26 when it releases on November 2, 2016!