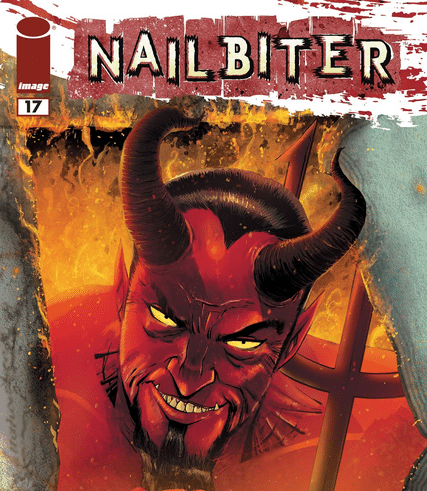 The start of a new story arc, Nailbiter starts to break away from the confines of Buckaroo in terrifying fashion.

Carroll is awake, Warren has gone AWOL, and everyone else has been moved on from the Buckaroo investigations. But it’s not long before Buckaroo’s disturbing past stretches out it’s murderous tendrils and touches the lives of NAILBITER’s prinicipal characters once again.

It’s been three weeks since everything hit the fan, and a lot has changed. Finch has hit the bottle hard, Barker has been taken off the Buckaroo investigation, and Crane has been indefinitely suspended since losing Warren. But with a new serial killer on the scene, one who murders people and leaves them looking like they were devils in disguise, every one of them is sure to be involved sooner or later.

READ: Love to be scared? See a list of our top 5 Horror Comics!

This is the first issue that really expands the story outside of Buckaroo. We’re starting to see the effects of its curse on a much wider scale, with a killer on the loose in Atlanta. Barker is assigned the case despite some reservations. Then she finds out where the suspect is from…

As Barker starts to realise the enormity of what is happening, Crane is doing some investigation of her own. Advised by Warren to investigate Doctor Glory, she breaks into his home, and finds more questions than anything else. Glory is hiding something, but what it is remains to be seen.

After a small hiatus, Williamson and Henderson hit the ground running, pushing the envelope on the horror, while adding more players to the field. The newest killer added to the Buckaroo roster is horrifying. Henderson creates murder victims that are horrible to look at, but you can’t help but stare. The gauged eyes, the horns ground into the victims heads… it’s terrifying stuff.

However, that’s not the ‘worst’ of it. The most fantastic sequence of the issue is Barker’s hallucinating about murdering everyone in her office. Since being tortured in the caves, she has had momentary memory lapses where she imagines murdering whoever is in front of her. Here, that is expanded into a hallucinatory action scene where she proceeds to kill everyone in her office. It is a blood soaked thrill ride, and you almost flinch with every kill she imagines. It is a great blend of action and gore. What she can do with scissors is horrific, and it will be interesting to see if these murderous fantasies become reality.

Williamson is a great storytelling ringmaster, making sure we get caught up in the deepening mystery of Buckaroo. Fun, exciting, and stomach churning, NAILBITER continues to thrill. Will we get to find out what makes Buckaroo so dangerous? Eventually, but when the storytelling is so good, they can take their time getting there.