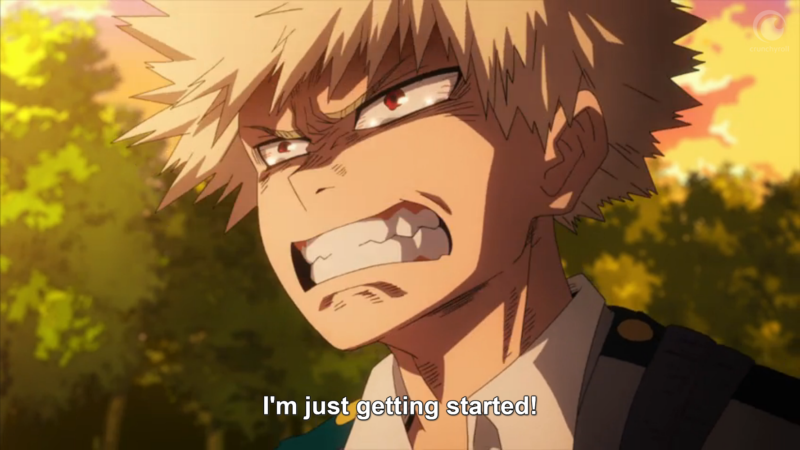 MY HERO ACADEMIA continues to explode in popularity! It’s no wonder, as the superhero anime is full of thrilling moments. From facing terrifying entrance exams to even more terrifying villains, there isn’t a dull moment in the series. Recently, the show’s Sports Festival Arc concluded with a battle between Shoto Todoroki and Katsuki Bakugo. Both characters are brilliant and powerful heroes-in-training, but in Bakugo’s case, “brilliant” might not be the first word that comes to mind. Initially, this explosive, foulmouthed jerk seems nothing more than your average childhood bully. But in reality, Bakugo is one of the series’ most interesting characters. His growth challenges traditional depictions of the bully character.

The first thing that sets Bakugo apart from other anime bullies, and bully characters in general, is that he is incredibly intelligent. While other bullies come across as dumb muscleheads (like Ryoma Terasaka in ASSASSINATION CLASSROOM), Bakugo consistently demonstrates his mental prowess. Even as a kindergartner, he learned more quickly than his peers, learning to read earlier than them. As a middle schooler at the beginning of Season 1, he announced that he aced the mock entrance exam for U.A. This is probably comparable to getting a perfect score on the SAT or ACT.

His intelligence is apparent even during battle. While he does use physical intimidation like other bullies, he doesn’t mindlessly use his strength or his Quirk. During the Sports Festival Arc, Bakugo consistently shows his tactical abilities. In the cavalry battle, he’s able to retrieve the points stolen by Monoma by strategically using the Quirks of his teammates. Also, during the tournament battles, he is quickly able to figure out his the weaknesses of his opponents, like Tokoyami’s Dark Shadow being susceptible to light.

READ: What do you think of the powers in MY HERO ACADEMIA?

Another thing that sets Bakugo apart from other bully characters is his superiority complex (and resulting insecurity). As a child, Bakugo was constantly admired and praised for his intelligence and talents. As a result, he concluded that he must just be better than everybody. This idea was reinforced by Midoriya being less talented and Quirkless.

However, Midoriya’s actions directly contradict Bakugo’s logic, which infuriates him. Midoriya continues to worry about others despite being “weak,” meaning he worries when he’s in no position to protect others or even himself, in Bakugo’s eyes. When Bakugo fell off a branch as a child, he didn’t expect anyone to worry about him. His idea was that if he was the strongest, then there’s no cause for concern. Instead, Midoriya immediately came to help. The same thing happens when Bakugo is attacked by the Sludge Villain as a middle schooler. Powerless Midoriya came to help.

This is why Bakugo bullies Midoriya: to reassert his worldview. He doesn’t bully Midoriya just because he’s stronger; he bullies Midoriya because cracks in his worldview cause him to be insecure. Eventually, Bakugo’s logic became so rigid that Midoriya not being “the least amazing” meant that Bakugo was not “the most amazing,” as we can see after he breaks down following his loss to Midoriya during the Battle Trial Arc.

LOOK: Ready for even more DANGANRONPA? Check out the trailer for V3 here!

Bakugo’s Growth as a Fighter

When Momo Yaoyozoru evaluates his performance against Midoriya, commenting that he acted “foolishly” by using such a large scale attack inside, he agrees with her logic. He is a fighter and a tactician, so he accepts logical criticism. Similarly, he can recognize when he is outclassed. When he sees Torodoki use his Quirk for the first time, he acknowledges their difference in power.

The effect of these experiences can be seen in his fight with Uraraka. When he faces her, he doesn’t make the mistake of underestimating her abilities or overestimating his own. Because he acknowledges her strength after seeing her in action early on in the battle, he keeps his guard up the whole fight and is surprised when she “quickly” reaches her limit. He fully expected her to have another strategy after what was actually her finishing move. This marks a definite change in his perception of others from his fight with Midoriya.

LOOK: Read more about the Bakugo vs. Uraraka fight here!

Bakugo’s growth doesn’t stop when it comes to battles. It’s subtle, but as the series has progressed, he seems to care about his peers more. Back in the cavalry battle, Bakugo didn’t seem to remember any of his classmates’ names. He even opens his fight with Uraraka by calling her “Round Face.” However, after the battle ramps up, he calls her by her name, implying that she’s worth acknowledging.

Later on, before his fight with Todoroki, he tries to get Todoroki out of his own head. While a lot of what he says is to ensure he has has a complete and indisputable win, one line stands out: “Your family circumstances, and your feelings… I don’t care about that stuff!”

Remember, Bakugo also overheard Todoroki’s story of childhood abuse. Bakugo was clearly stunned by Todoroki’s backstory, as shown in the above image. While he isn’t overtly sympathetic in his conversation with Todoroki, Bakugo brings up Todoroki’s family circumstances because he wants him to know that his past doesn’t matter on the battlefield. It’s not as if Bakugo is being as kind as Midoriya to get Todoroki to pursue his own dreams, but he wants Todoroki to know that, at least while facing him, nothing else matters.

READ: Unexpected and exciting things could be in store for ONE PUNCH MAN!

At the beginning of the series, I actually hated Bakugo. He seemed unnecessarily cruel, especially when he went so far as to try and prevent Midoriya from enrolling in the hero program. However, I came to love him after realizing how complex he is. His story arc is similar to that of many top-ranked high school students going to college. They figure out that they’re not actually the best and that talent is the norm.

In this sense, he’s a success story. He realizes what he was wrong about and matures. He doesn’t try to avoid the painful realization and punch his way out. He’s smarter than that. He undergoes this painful change and comes out a better person because of it.

I won’t spoil anything for anime-viewers (the manga’s way ahead), but this isn’t the last we’ll see of Bakugo’s growth and maturity. Many people within the universe of MY HERO ACADEMIA believe Bakugo to be an unhinged, battle-hungry, volatile teenager. Some of them, as shown in last week’s episode, “Bizarre! Gran Torino Appears,” even want to help him correct his ways. Bakugo will have the chance to grow even more as he learns to admit his feelings and insecurities instead of bottling them up.