All Might went hard. I may have shed a tear. Or several. Following the introduction of All For One and the revelation of his devastating power, MY HERO ACADEMIA has finally reached the climax of their fight. Something the series does well consistently is build up the emotional anticipation before battles; every punch brings forth a flurry of feelings; every moment pulls from weeks of episodes worth of characterization and story. Little details like stance or verbiage call back to older fights. From Midoriya’s first battles during the entrance exams to All Might’s final moments, Episode 49, “One for All,” linked together every fight. While the series is very far from over, the fight between All Might and One For All is the highest point of the series thus far.

At this point, following Bakugo’s rescue, the students are all gone from battle. As such, All Might no longer needs to defend them, allowing him to fight as hard as possible to defeat One For All. In MY HERO ACADEMIA, villains target the innocent and weak. This forces heroes to defend and attack simultaneously. However, the very people that often become liabilities for a hero are also the impetus for their resolve. Today’s episode showed fans that heroes have a unique power as well. Sticking to their principles allows a hero to leap past their limit. By clinging to them in the final moments of battle, a hero can turn the tide. “One for All” may very well have been All Might’s last major solo fight. We don’t know if the smoldering embers of One For All have extinguished within him.

But we do know one thing for sure. The Symbol of Peace will never die.

For the first time in the series, we see All Might really struggle. Even against the Nomu at the Unseen Simulation Joint, All Might was able to just slightly put in extra effort to smash his enemy into the stratosphere. This time, All For One counters him blow for blow. This is a very important change for MY HERO ACADEMIA. All Might has consistently been the ceiling of power for the show. As a hero, he’s so strong that the mere threat of his presence decreases the crime rate. After his severe injury and reduction in power before the show’s start, his brief appearances alone kept villains at bay. 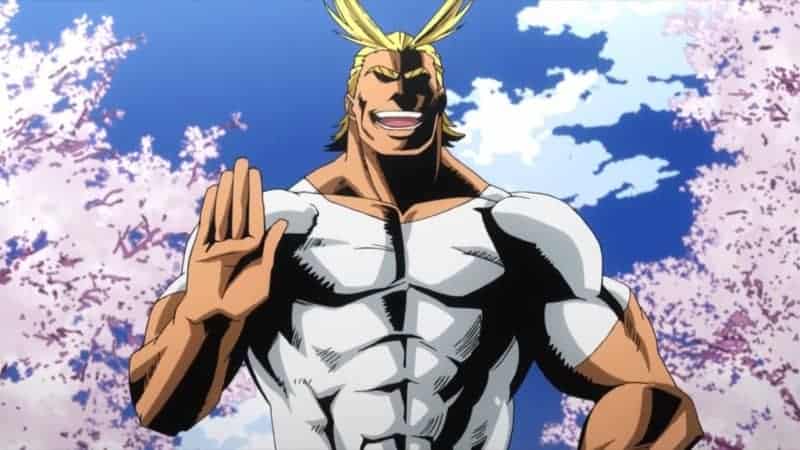 All Might’s form is distinctive and even promotes peace when deflated | Image: Crunchyroll

Giving him an enemy capable of exchanging blows for an extended period of time explicates his power as finite. That is to say, whereas in the past All Might came to save the day, this time he would be the person in need of saving. But, since he is and always has been the strongest hero in the show, he can’t be saved. The battle between him and All For One produces shockwaves capable of pushing back even top heroes. In this case, like Midoriya during the Sports Festival, the help All Might receives comes from within.

The holders of One for All are capable of speaking within the minds of successors, this much is known. But All Might was surprised when he learned about this contact from Midoriya. Fighting against All For One is the first time he had a genuine need for it. Something MY HERO ACADEMIA constantly shows us is that heroes that understand their origins can derive incredible strength from it.

During this episode, All For One revealed a secret that, as of now, is incredibly strange to hear. All For One revealed that Shigaraki Tomura is truly Shimura Nana’s grandson. For those who aren’t so good with names, that means that the face of the League of Villains has been a relative of All Might’s predecessor. All Might’s reaction to this is rather extreme, showing more shock than when All For One described gruesome details from Shimura Nana’s death. But to us fans, it also stalled our understanding of the fight. We don’t know all that much about Nana Shimura’s life or Shigaraki Tomura’s childhood. We can only comprehend that there is some reason why All Might wants All For One and Shigaraki apart. 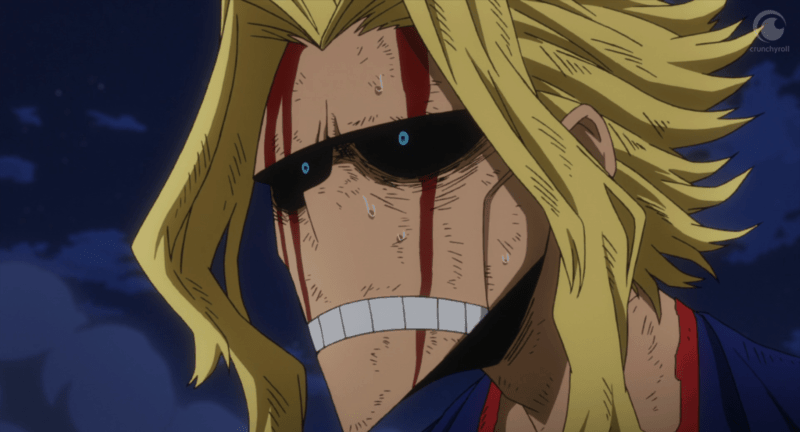 All Might was instantly demoralized after learning about Shigaraki’s connection to his former master | Image: Crunchyroll

This could be something as simple as regretting that the grandson of his deceased master became a criminal mastermind. As Shigaraki himself brings up constantly, hero society is a society of assurances. When they lose a body to the other side, they lose everything. This episode showed us that people had begun to lose faith in heroes. Not every instance of heroic success gets documented and broadcast. But, each and every failure is plastered across the screen to be criticized and mocked. It’s entirely possible that the gravitas of this particular loss hit All Might especially hard. In reality, it’s probably more meant to bring out All For One’s ridiculous cruelty. Even while expertly mixing and combining his Quirks to counter All Might, All For One takes the time to mock All Might’s heroism and drag him emotionally. Hopefully, we’ll see even more of those two’s storied past.

One For All’s Legacy

Following the end of All Might’s battle with All For One, he stands in his half-diminutive form, triumphant and strong. He proves that the Symbol of Peace is not merely an evocative quality stemming from his appearance. All Might’s heroism stems from his incredible limit-breaking actions. ‘United States of Smash’ is the strongest MY HERO ACADEMIA attack to date. Similar to the massive smash Midoriya used to defeat Muscular, All Might drew from his very soul to pump out a smash attack capable of overpowering the most overpowered villain of all time. The message he sends following his victory is clear. All Might was already struggling to maintain his muscle form for more than brief moments each day. Now, that time is completely over. One for All is now Midoriya’s Quirk and his alone.

All Might’s mind turned to his memories as he acted on the words of his masters. | Image: Crunchyroll

In another emotional rush for the series, MY HERO ACADEMIA reminded us of the immense respect every hero has for All Might. Even Endeavor, the series’ biggest hater, expresses very shonen rival-esque regret at All Might’s sudden weakness. Bakugo stares at the screen with equal admiration as everyone else around him. The support for All Might was collective, resonant, and strong. But that current support is a future burden for Midoriya. He already struggles to fill a small percentage of All Might’s shoes. His path to the symbol of peace will be difficult.  But Episode 49 “One for All” marks a new segment of the series. Midoriya won’t be able to lean on All Might like he did in the past.

A Bright Future in MY HERO ACADEMIA

This episode combined emotional strength with an incredible battle. Every time All Might goes all out, he passes his limits in ways new to the occasion. His limit is not truly defined; whatever line his strength finds itself at he will always push it up to victory. This may even be a unique ability possessed by those who inherit One for All. It may be the case that the Quirk stockpiles more than just strength and allows users to continue breaking their physical bonds. Or, and much more likely, it could be the case that those worthy of the Quirk are willing to be true heroes. They are willing to use every ounce of their lives to protect those around them.

All Might has solidified himself as an eternal hero of sacrifice. While I am incredibly sad to see the end of his major combative role in MY HERO ACADEMIA, it was time. Midoriya needs to begin stepping more into the spotlight with his own unique style of One for All. With the final embers of the power in All Might extinguished, we’re likely going to see some more much needing tutelage on the power. The coming episodes will begin even more strides on Midoriya’s journey to becoming the strongest hero.