Previously in MULTIPLE MAN, Jamie Madrox found himself traveling head first into the future. What he came to discover in this inevitable reality though was a world overrun by his own dupes! So, in MULTIPLE MAN #3, Jamie must devise an unstoppable plan to save the world from himself.

Writer Matthew Rosenberg’s run on the X-Men character has undoubtedly been one of Marvel’s wackiest series of the summer. With only two issues remaining, there is no telling how the events of Jamie Madrox’s story will end.

All we do know is that we’re totally along for the ride. 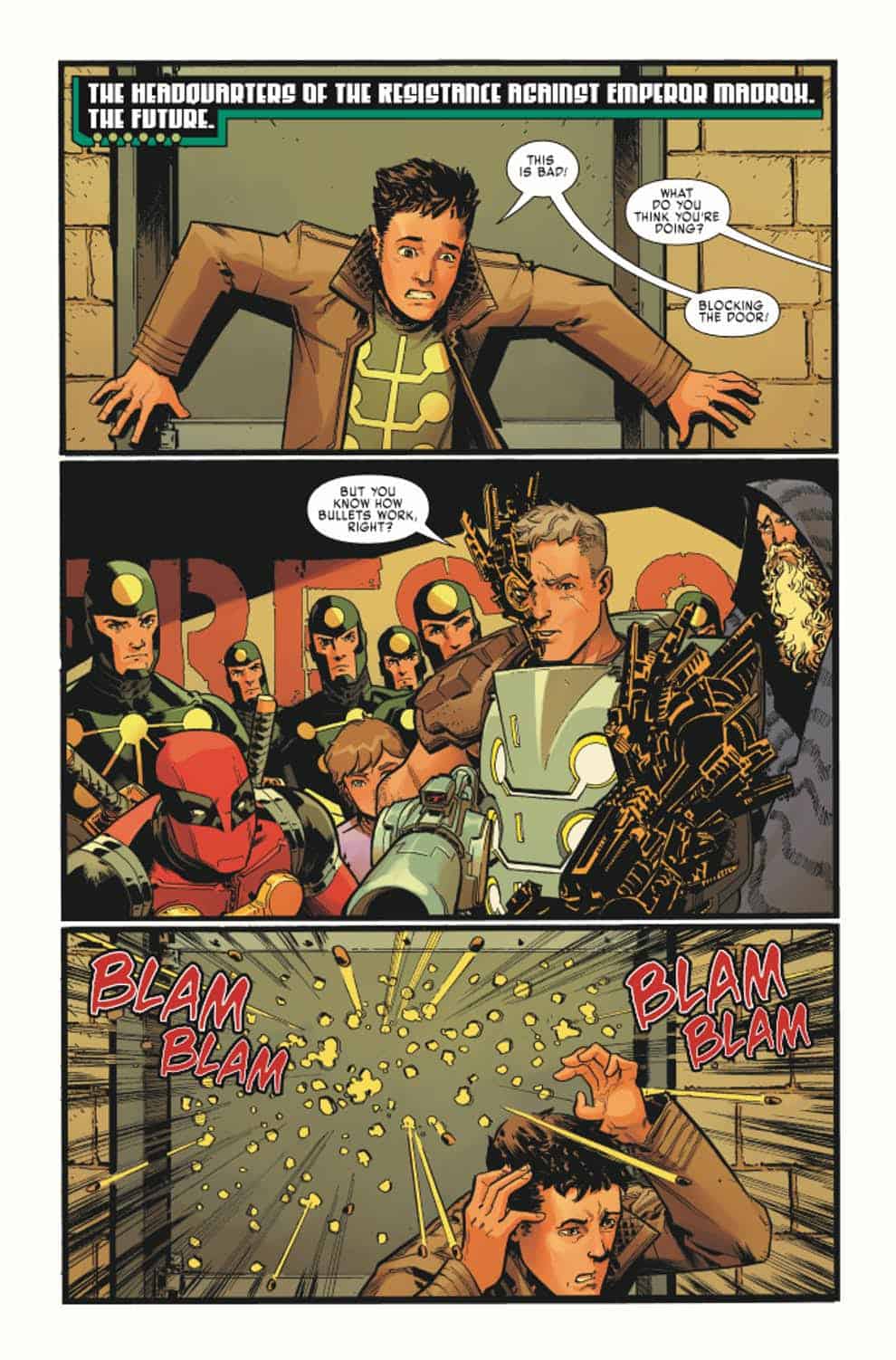 Off With His Head

The world is in total chaos! Well, at least the world where Jamie’s dupes are on the loose. After discovering a squadron known as The Resistance that is dedicated to toppling the empire Jamie’s own dupes created, our titular hero began devising a plan. Unfortunately for him and the rest of the world, that plan has not been going so well.

Ambushed by thousands of evil dupes, Jamie decides that the only way to save the world is to go forward in the future and find someone, or something,  capable of stopping the dupes and their prime leader. Unfortunately, once again, more evil dupes ambush Jamie and squash his plans. In fact, Jamie’s Deadpool dupe dies in the midst of the ambush but not before giving Jamie a chronal beacon, a device capable of summoning the X-Men from the past.

The Dupes are Loose in MULTIPLE MAN #1

Before Jamie can use it though, evil dupes subdue and take him. These dupes bring him to the Emperor, the dupe ultimately responsible for the world’s chaos. Face to face with the cruelest dupe of them all, Jamie attempts to appeal to the Emperor’s humanity. He informs him that after Prime Jamie’s death, the remnants of his persona became exemplified in the dupes that eventually generated. Some of these remnants are indeed evil. However, to Jamie, there are hints of humanity even in the cruelest of dupes because Jamie isn’t all that bad after all.

Unfortunately for Jamie once again, the Emperor isn’t sympathetic towards his appeals. As a result, the Emperor decides to draw his sword and chop off Jamie’s head.

Three Down, Two to Go

In regard to the plot of MULTIPLE MAN, this issue and its predecessor find missteps in the progression of the narrative. There are various moments where the plot runs thin. I personally expected more development in regard to The Resistance. Additionally, the pacing continues to struggle as the continuous ambushes that take place often feel hectic.

However, MULTIPLE MAN #3 does find its strength in Jamie’s own character development. We see him take on a leadership role within The Resistance, even if his plans never come to fruition. We also see him genuinely acknowledge his own humanity. He may not usually see himself as an individual totally capable of heroism in the context of this series, but he’s certainly getting there. Or has his journey come to an abrupt end?

The final page of this issue is particularly shocking as it depicts the beheading of the “revived” Jamie we have come to know. Thus, I give a round of applause to Matthew Rosenberg for incorporating such a bold, unexpected ending into the issue’s final page. 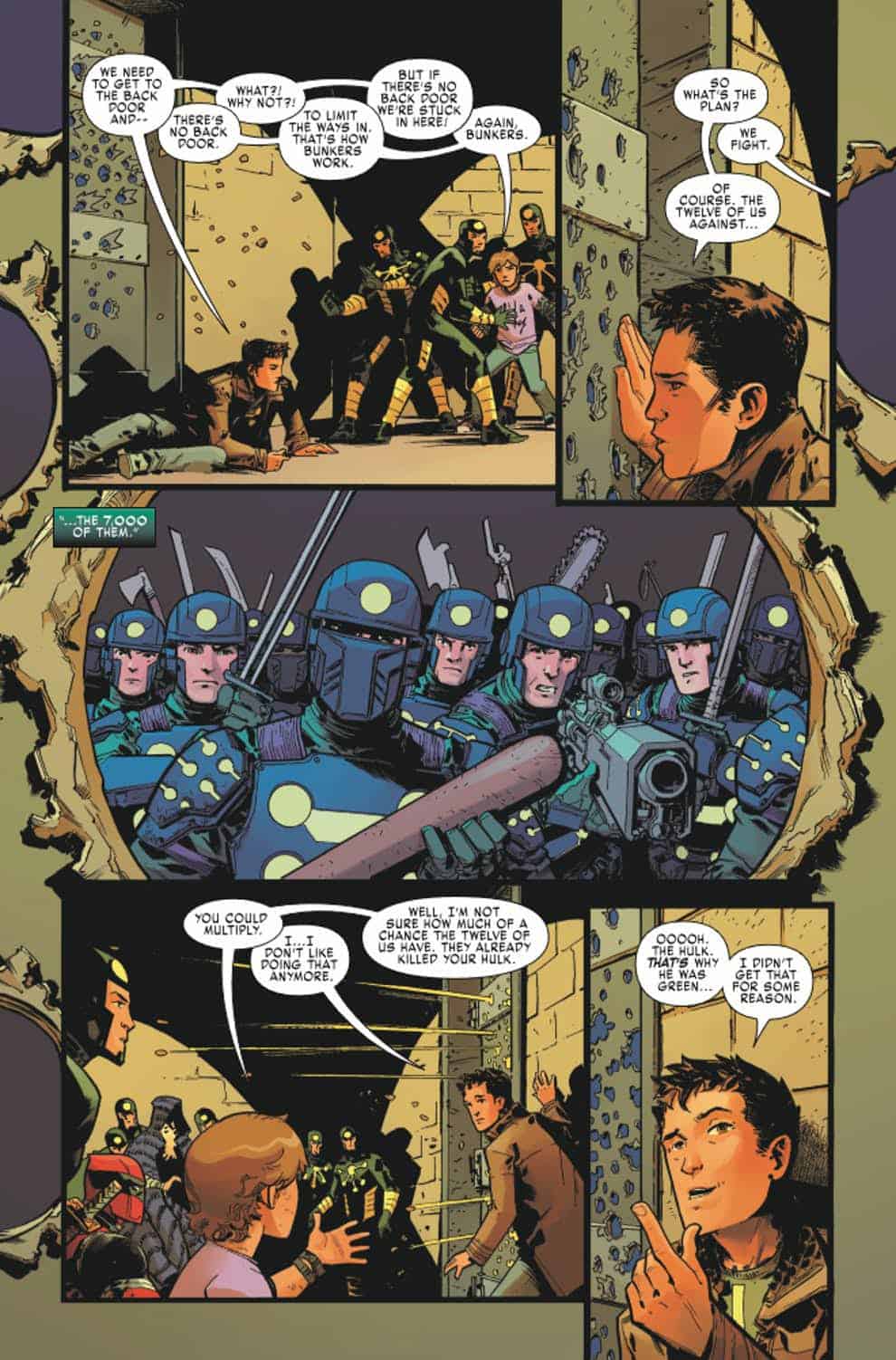 The Many Hues of MULTIPLE MAN #3

Unsurprisingly, Marcos Martín brings his A-game once again with this week’s cover art. In fact, I believe MULTIPLE MAN #3 has the best cover of the series. Martín depicts Jamie’s various dupes as though they are truly remnants of Prime Jamie’s original persona. I love the mosaic look of the cover in addition to the vibrant colors.

Thus, Martín’s work proves to be MULTIPLE MAN #3’s best artistic aspect as it truly exemplifies some of the run’s most significant thematic elements.

In regard to the content of the issue’s imagery itself, I still find many flaws in the issue’s artwork. This installment is full of action and quick transitions which ultimately come across as chaotic across the work’s pages. A lot of detail is lost due to the fact that so much is depicted throughout each and every panel.

Too much content is squeezed into these panels and that unfortunately detracts from the potential MULTIPLE MAN #3’s imagery can convey.

Though MULTIPLE MAN #3 still maintains many of the flaws the series has struggled to fix, it is a massive improvement upon the last issue. We witness Jamie grow as a character and hero to our satisfaction. We also witness a shocking conclusion that leaves us wondering where exactly the narrative is going from here, and that’s not necessarily a bad thing!

Now, readers are being kept on the edge of their seat. No one has any idea what to expect now in the journey of Jamie Madrox, which sets the penultimate issue up for some great potential.