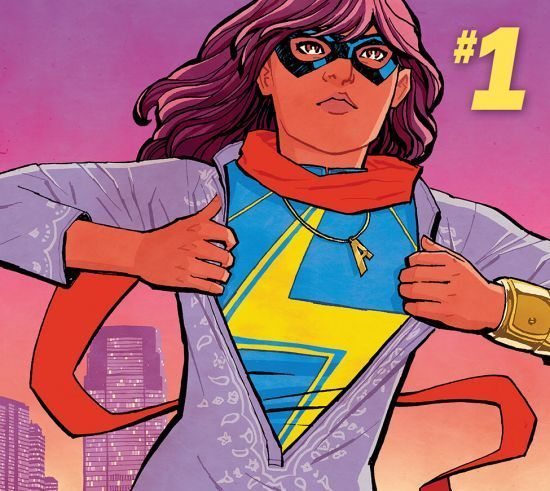 MS. MARVEL is back with an All New All Different #1. Ever since the world “almost ended” Kamala Khan has been riding high as a member of The Avengers, but when she takes a step back from Earth’s Mightiest Hero duties she’s realizes everything around her is changing.

The relaunched MS. MARVEL #1 begins with Kamala Khan detailing what’s been happening in life since the world almost ended (and her previous series concluded). Namely, she’s been having the time of her life as a member of the Avengers, battling giant rat-monsters and end enjoying rides home to Jersey City from Iron Man himself, Tony Stark. Her social life has improved as well, as the events of the “Last Days” story-arc featured her patching up her issues with best friend Nakia, and even former “frenemy” Zoe Zimmer is closer to her now after the former’s life-changing experience during the near apocalypse. Kamala’s serenity is short-lived however, as she learns that while she’s been busy with Avengers business, Bruno has become romantically involved with a transfer student named Michaela Miller who goes by Mike. 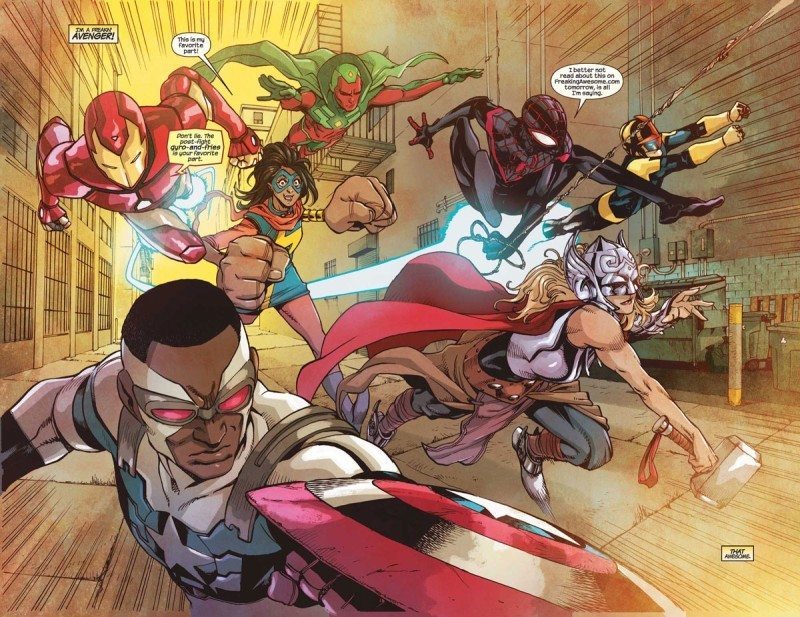 After some passive aggressive comments, Kamala confronts Bruno over his relationship with Mike. He tells her that after their conversation on the roof (seen in MS. MARVEL #19) he realized that he had to move on from Kamala. Before their conversation can proceed further, the two are shocked to discover a giant billboard featuring Ms. Marvel’s face advertising a newly gentrified housing development and shopping complex known as Hope Yards Developments that’s sprung up in Jersey City. Kamala is aghast at the use of her image, and decides that Ms. Marvel needs to pay a visit to the owners.

READ: Feeling behind? Catch up on MS. MARVEL #19 here!

After a quick change, Ms. Marvel sneaks into the development’s office and discovers that they plan to build over the entirety of the city. Before she can discover more, she hears a commotion outside and finds two goons harassing a local business owner with high-tech crowd control batons. She easily dispatches them, but her and the man are forced to flee from guardian drone robots protecting Hope Yards. They’re able to get away, but encounter a group of anti-gentrification protestors who are very angry at Ms. Marvel’s “approval” of the project. After shrinking, Kamala is able to escape with the help of Bruno.

After they distance themselves from the crowd, Bruno begins explaining in flashback to Kamala how he became involved with Mike. After Kamala joined the Avengers and continued to get busier as Ms. Marvel, Bruno felt incredibly lonely. During a battle between Ms. Marvel and a giant genetically enhanced frog (because why not?) his life is saved by Mike. The two begin spending time together, and after realizing they have much in common begin dating. Eventually they introduce each other to their respective families, something that could have never happened in a Kamala/Bruno relationship. At the behest of his grandmother, Bruno even confesses to Mike his previous feelings for Kamala, but the two agree to continue seeing each other as they both feel they have something special. 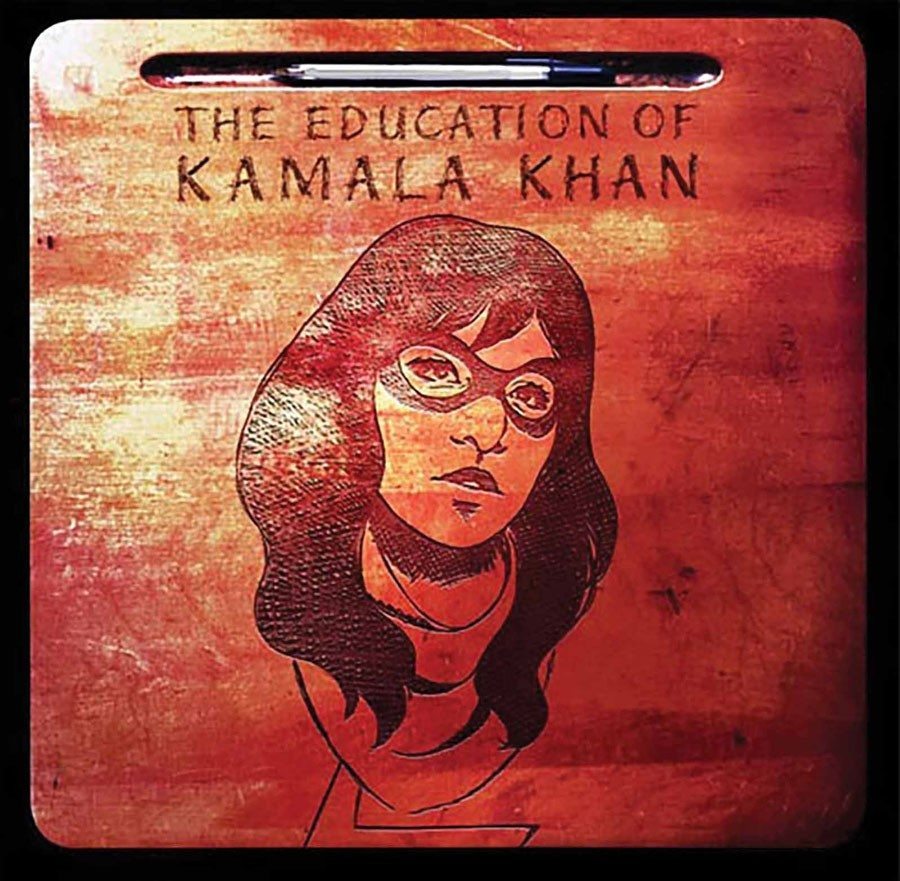 When I reviewed SPIDER-GWEN #1 last month, I bemoaned the fact that I felt the series lost much of its narrative flow due to the relaunch. I’m happy to report that MS. MARVEL #1 features no such problems, as this could have easily been the twentieth issue of the previous series. Writer G. Willow Wilson does a marvelous job of crafting a slightly new status quo for Kamala while still retaining all the development from the series’ previous incarnation while introducing two new storylines to move the plot forward. Firstly, the Hope Yards storyline has a great deal of potential, especially since the Jersey City setting has been such an integral part of the title in the past. Secondly, Wilson deftly handles the introduction of a new love interest for Bruno. First and foremost, the Mike character is really well developed. Also, I loved the decision to have the story of their relationship be told in direct flashback. It allows readers to truly become engaged in said relationship, as opposed to only seeing it through Kamala’s eyes.

READ: Wanna catch up on more “All New All Different” Marvel? Check out our review of the relaunched SPIDER-GWEN #1!

MS. MARVEL #1 is full of the usual sparkling characterization the book has become known for, and all the regulars except Kamala’s family (who oddly don’t appear in the issue) get their moments in the sun. However, the most engaging character of the issue is easily the newly-introduced Michaela “Mike” Miller. We first meet her making out with Bruno in a high school hallway, and I must admit I was initially wary of the concept. I feared the character would be reveled to be a typical “other woman” trope whom Kamala must over come to reunite with Bruno. Instead, Wilson crafts an interesting and fun character, who I was rooting for and wanted to know more about about by the end of the issue. I also love the fact that she’s portrayed as a half-latina child of lesbian parents who are, by comic book standards, overweight and yet none of those things define her character. In fact, outside of an anger induced (yet in my opinion still out of character) comment by Kamala regarding her weight, none of those traits are even mentioned, just seen over the course of the story. 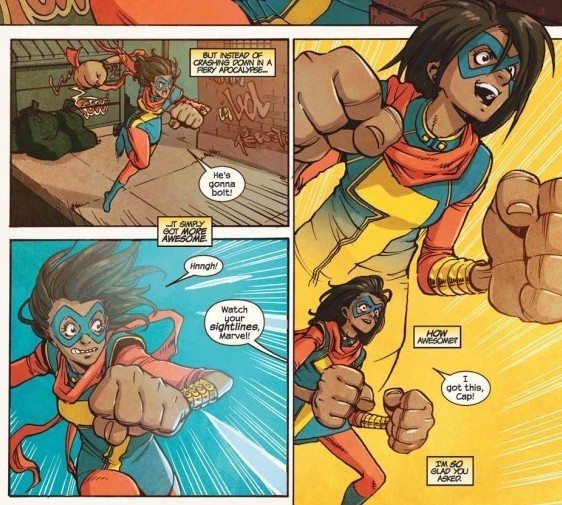 Artistically, the issue is split between the two artists who’ve been associated with the Kamala Khan version of Ms. Marvel, Takeshi Miyazawa and Adrian Alphona. Personally, I was a big fan of this split, as the artists each took the portion of the book that best reflect their skills. Miyazawa handles the first half, and as usual shines on all the super-heroic Ms. Marvel action, while Alphona brings his quirkiness to displaying teenagers in love style during the Bruno/Mike flashback section. The consistent coloring by Ian Herring also does a great job of keeping the two styles in-line so that the flow of the story isn’t affected. Personally, I would love to see more of this type of breakdown in the future.

MS. MARVEL #1 is a true triumph in my eyes. The issue maintains the high standards set by the series’ previous incarnation, while introducing two major new storylines (and one great new character) to Kamala’s world.