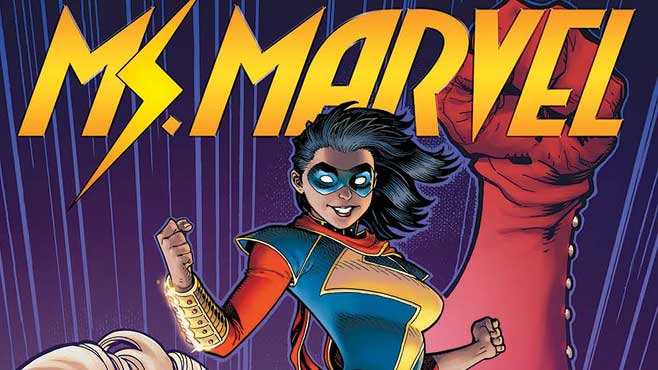 The “Last Days” continue upon Jersey City, and Kamala Khan is doing her best to deal with a city on the brink, looters running wild, and the kidnapping of her brother. Luckily she gets some assistance from her hero – Captain Marvel! 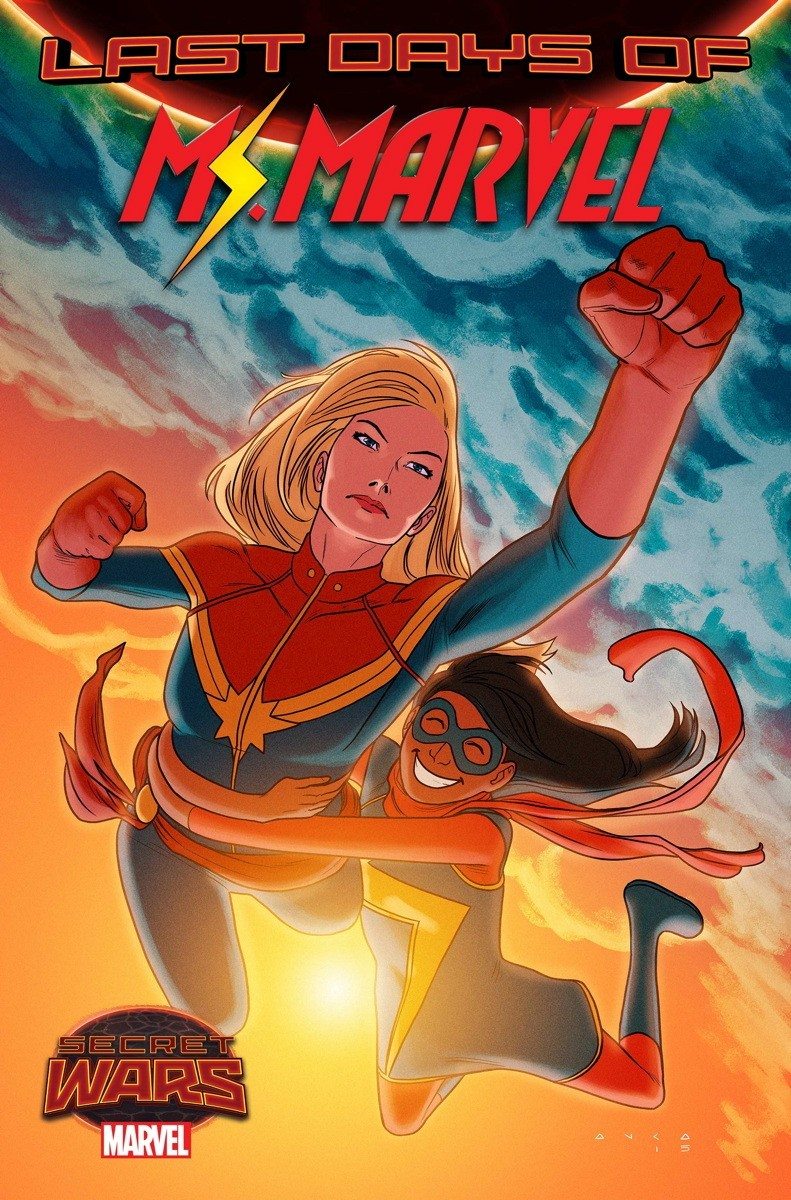 MS. MARVEL #17 begins where issue #16 left off, with Kamala, in her Ms. Marvel guise, shocked at the sudden appearance of Captain Marvel herself, Carol Danvers. Kamala is initially in a state of shock, stumbling over her words as she attempts to express her hero worship towards Carol and her fear of the seeming apocalypse happening around them. Eventually Kamala regains her composure long enough to ask Captain Marvel to assist her in rescuing her brother, and Carol begrudgingly agrees. 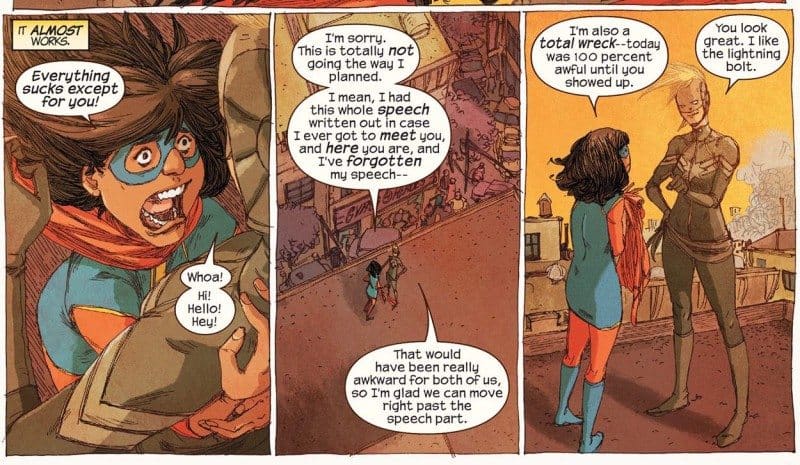 The two set off through Jersey City to search for Aamir, all the while discussing the nature of heroism and how to deal with the fact that the world is very literally ending around them. After short confrontations with a band of looters and the Ms. Marvel villain Kaboom, the two are able to locate Kamran’s hideout and burst in to find Aamir floating in what appears to be a cloud of Terrigen Mist, leading us directly into… 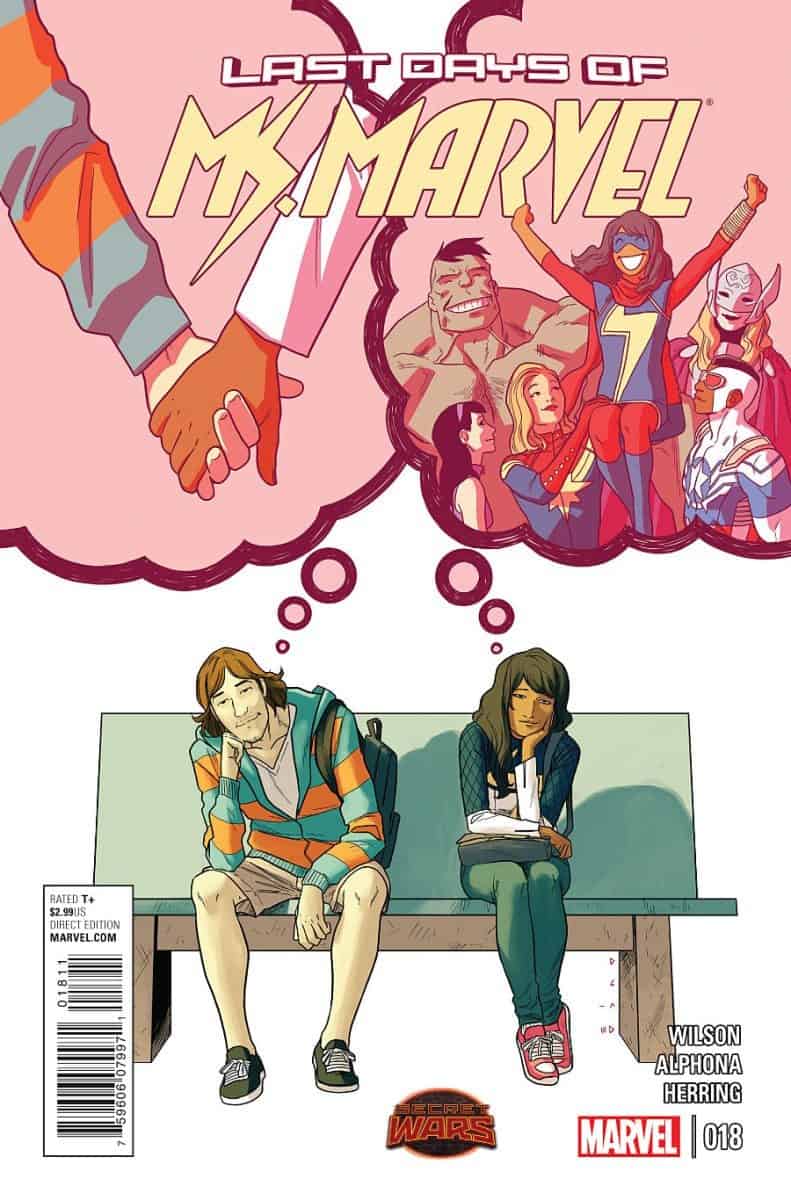 Kamran confronts Captain Marvel and Ms. Marvel, gloating to Kamala that he’s exposed her brother to the Terrigen Mist, activating his Inhuman gene. The Captain is not convinced however, stating that the mist around them looks nothing like any Terrigen she’s ever seen. As if on cue, Aamir awakens and begins firing of uncontrollable bolts of force field energy from his body. Kamran implores Aamir to join the Inhuman cause, but Aamir rebuffs him and then knocks him unconscious with a force-field burst before passing out. 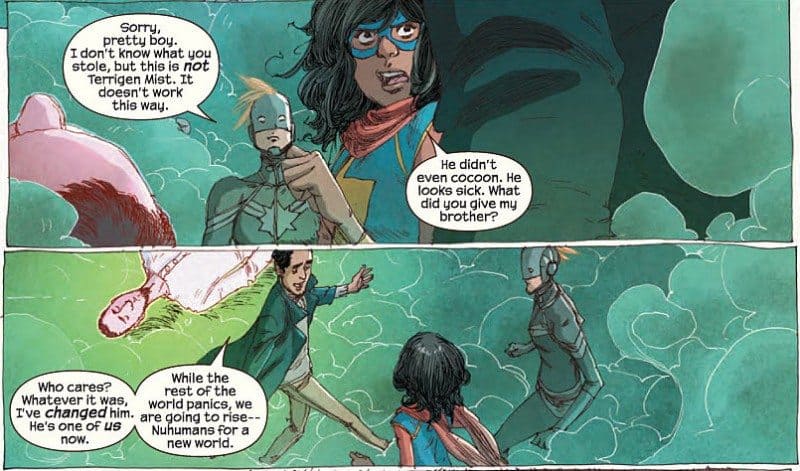 Captain and Ms. Marvel rush Aamir to the high school (which had been established two issues earlier as an evacuation center). While Bruno tends to Aamir, Kamala and Carol have a final talk about being prepared for the possible end of everything before the latter leaves, presumably to try and save the world from destruction. After Captain Marvel’s departure, Kamala rushes inside to find her family. After a confrontation with Aamir over his new powers, their parents show up. The issue ends with a shocking reveal that will have major repercussions in at least the final issue of the series, and possibly longer depending what Ms. Marvel’s place in the Marvel Universe is after “Secret Wars” finally ends.

See how the “Last Days” of MS. MARVEL began in our #16 review here!

While I don’t usually review two issues in a single review (in fact, this is only the second such occurrence in my time here at Comicsverse) it’s actually somewhat prescient that my personal schedule led to these two issues being reviewed together as they really do function as one straight story. From a plot standpoint, the age-old concept of heroic team-up really works here, as it truly is the end of the world. The twist at the end of #18 opens up some questions about what we’ve seen so far in the series, and would be a major change in the status quo going forward (assuming Kamala’s life and status quo stays the same after “Secret Wars.”

Character-wise, both issues are carried by the Captain Marvel/Ms. Marvel bond. This was a meeting that fans have been waiting for, and writer G. Willow Wilson really knocks it out of the park. From Kamala’s initial-hero worship, to Carol’s gentle attempts to get her to understand that the world is really ending, every moment the two are on-panel together is pure gold. The definite highlight for me was the scene where they discover the abandoned litter of cats in #17. I loved how that was played as the moment that really drove home the seriousness of the situation to Ms. Marvel, and Captain Marvel’s response was perfectly on point. I also enjoyed the extra emotional weight that was added to Carol Danver’s final words since we as readers know that the heroes do fail, and the 616 Marvel Universe has (for the moment) been destroyed. While he didn’t get nearly as much page time, I also really enjoyed Aamir’s characterization in these two issues. I really liked the fact that he was happy with who he was, and had no desire for any type of super powers either before or after he got them.

I’ve always been a fan of Adrian Alphona’s art in this series, but these two issues took it to another level entirely. The scenes of Jersey City on the brink of collapse were quite well done, especially the large crowds of terrified citizens. They really brought a street-level feel that’s often missing from cosmic-level comic book events, including (in my opinion) the main SECRET WARS book.

I’m almost sad to have to heartily recommend these two issues of MS. MARVEL. As great as I thin they are, the entire concept of this being this title’s “Last Days” makes me sad. While we know the book is returning Post-SECRET WARS, it’s hard to know if it will ever be this good again. Definite must read.

Check out more from Brian!