Millennials: a demographic cohort reaching young adulthood in the early 21st century. Millennials are an unusual group. Somehow we were born within the last few years of the previous century, and this is the term that we are assigned; “Millennial” has taken legitimacy as an actual socio-cultural characterization. Unfortunately, many of the national sentiments regarding the “Millennial” generation, my generation, are highly negative.

Professional psychologists and social analysts have officially termed the Millennial generation as “Generation Me,” attributing various traits such as narcissism and excessive self-indulgence to this section of the population. Millennials are often called lazy, self-absorbed, sheltered, in general taking the opportunities around us for granted while possessing no sense of reality or interest toward others. It is needless to say that these negative connotations have led to the ever-present opinion that Millennials are considered useless, leading an entire conservative generation to believe that we are unable to become productive members of society, as well as contributing to unconstructive perceptions of ourselves and our abilities.

READ: We have a lot of thoughts on MS. MARVEL. Read why we feel Kamala is counter-cultural!

Given my age, I am considered a part of the Millennial generation, yet I have had difficulties connecting with this term due to its negative connotations. I feel at odds with the perception of Millennial traits and my personal values, and I know many other Millennials share the same sentiment. Growing up as first-generation (meaning I was born in this country while my parents were not), there was no room for the so-called Millennial mentality, as my family’s essential values were based on pragmatism and responsibility. For many children of immigrants, we live with a constant awareness of what our parents and ancestors have gone through and the sacrifices they have made for our sake, as well as the high expectations raised for us so that we may honor their efforts and reach the American Dream. In this respect, among these Millennials, this so-called “Generation Me,” stands a Millennial unlike any other – a hero who is willing to fight for what she believes in, and in doing so rejects all the negative stereotypes connected with the word.

Kamala Khan: average high school student, a resident of Jersey City, a girl who struggles to balance her school life and personal life, and avid fan of pop-culture media, including comics and fandom. She is also a first generation Muslim Pakistani-American, as well as a super-powered woman with the moniker of Ms. Marvel. Originally created by editors Sana Amanat and Stephen Wacker, drawn by artist Adrian Alphona, and written by G. Willow Wilson, Ms. Marvel is the reincarnation of Carol Danvers, or Captain Marvel, as well as one of Marvel’s leading heroes, and the first Muslim-American superhero to have her own leading title. And she is not your stereotypical Millennial.

READ: We discuss more about why Kamala is a hero for millennials!

For one thing, in addition to being a badass superhero, Ms. Marvel is also a teenage girl and embodies many of the concerns that the average American teenager would have. She’s concerned with fitting in, figures out a personal life away from the restrictions her parents set (which also intersects with cultural expectations), and engages in various forms of social media. However, she is never degraded for this, and in addition to these interests, is shown to command a deep admiration and appreciation for her cultural heritage and community, seeking advice from her local Imam and finding strength from her parents. Even when faced with ignorant people who deem her background inferior or less American, Ms. Marvel is not afraid to stand up for her community, her family.

Furthermore, she is politically active. In one arc of the series, when gentrification threatens Jersey City, Ms. Marvel takes a stand and joins her community to fight against this very real menace. As part of a diverse neighborhood, gentrification isn’t just a distant issue — it is a local reality that affects her family, her friends, her neighbors, and herself, and Ms. Marvel won’t just stand by and let others take advantage of her home. Also, in issue #13 of MS. MARVEL, when faced with the prospect of a supervillain being nominated into office (where have we heard that before?), she goes on a door-to-door campaign, advising people to practice their right to vote to determine a better future in their upcoming election.

As part of the Millennial generation, we are perceived as individuals who don’t care about politics. And why should we, when we’re told that our voices don’t count, that we’re too young to understand anything of significance, and our intelligence is constantly gaslit? We begin to feel as though we cannot contribute anything substantial to a broken system, even something as simple as a vote. Ms. Marvel reflects the power of caring, the potential of taking a stand versus that of lying down, and shows that each of us can contribute something, especially in dark times like these.

In issue #10, Kamala touches upon the Millennial identity issue, talking to a group of young kids like herself about the unfair assumptions placed upon them — upon us — the notion that we, the Millennials, are parasites, draining the resources of our society without giving back. In Ms. Marvel’s words, “I get it, I do,” we hear a reflection of what all of us Millennials feel: the frustration and the unfairness of having our entire identity reduced to a simple, inaccurate image. Yet, in a world where no one seems to care what we think, Ms. Marvel does. She is willing to act as our ally and our voice, inspiring us to use our talents and abilities to aid her fight against injustice, as well as being strong and proud to represent an entire generation. 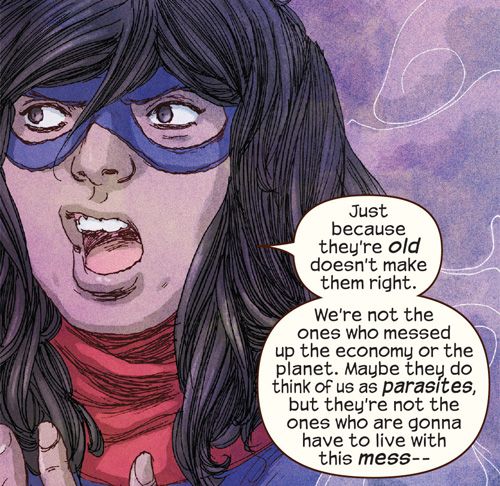 In Issue #10, Ms. Marvel says, “Maybe they do think of us as parasites, but they’re not the ones who are gonna have to live with this mess….” As we all already know, we are already living with this mess of a society manipulated by individuals with too much power and too little concern for anyone except for people who look like themselves. However, the Millennial generation has one important thing that makes us different from those individuals: we care. As part of the younger generation, we don’t want to repeat the same mistakes and prejudices that made the mess we have to live with. Like Ms. Marvel, we want justice for everyone, not just a limited population, and we demand change from all the corruption and the cliches. For Millennials, it is often too easy to be labeled according to one’s age or background. It is too easy to be judged by looking at the technology in our hands or the clothes we wear and label us without actually seeing us. Ms. Marvel rejects those who say Millennials are parasites, pointing out what we can do when we use our resources and our creativity to dream new ways of improving the world and fighting against the evils installed in our socio-political system long before we were born. As someone once said, “Be the change you wish to see in the world.” For many Millennials, we are learning to become the change to produce a world we want to see.

READ: Here’s a personal letter to Kamala from one of our writers!

As a modern-day comic book icon, Ms. Marvel is a beautiful combination of diverse representation, political commentary, and social advocacy for all the things that many Millennials do believe in: equality, tolerance, and respect, both for one’s own culture and for others as well. Kamala Khan is many things: a loving daughter, a proud Muslim Pakistani-American, a feminist, a fangirl, a Millennial, and she is not your stereotype. And neither are we. In this respect, Ms. Marvel stands for the Millennial, who while not always succeeding, never stops trying to uphold the real American Dream: a life of maturity, independence, and change.

So the next time someone has something negative to say about Millennials, tell them to look at Kamala Khan, a hero from our generation.