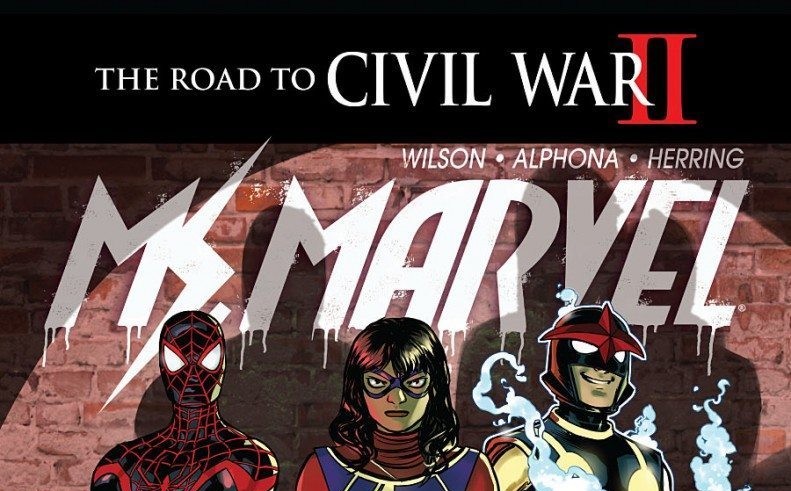 MS. MARVEL #7 takes a break from the series’ normal story-arc structure to tell a seemingly one-off story guest starring Kamala’s Avengers teammate Miles Morales aka Spider-Man. However, the issue’s status as a CIVIL WAR II tie-in and several hints suggest that the story’s consequences may be more far-reaching than that.

READ: Catch up on the previous issue of MS. MARVEL here!

The seventh issue quickly establishes its setting as the Tri-State Ultra Mega Science Fair. The competition, held in Madison Square Garden, pits teams of gifted students from New York, New Jersey, and Connecticut against each other with college scholarships on the line. Jersey is represented by our titular heroine, along with Bruno, Mike, and a few other supporting characters. Their cross-river rival New York’s team features Ganke and his Best friend Miles Morales, an issue for Kamala since she knows his identity as Spider-Man, but he’s unaware that she’s Ms. Marvel. 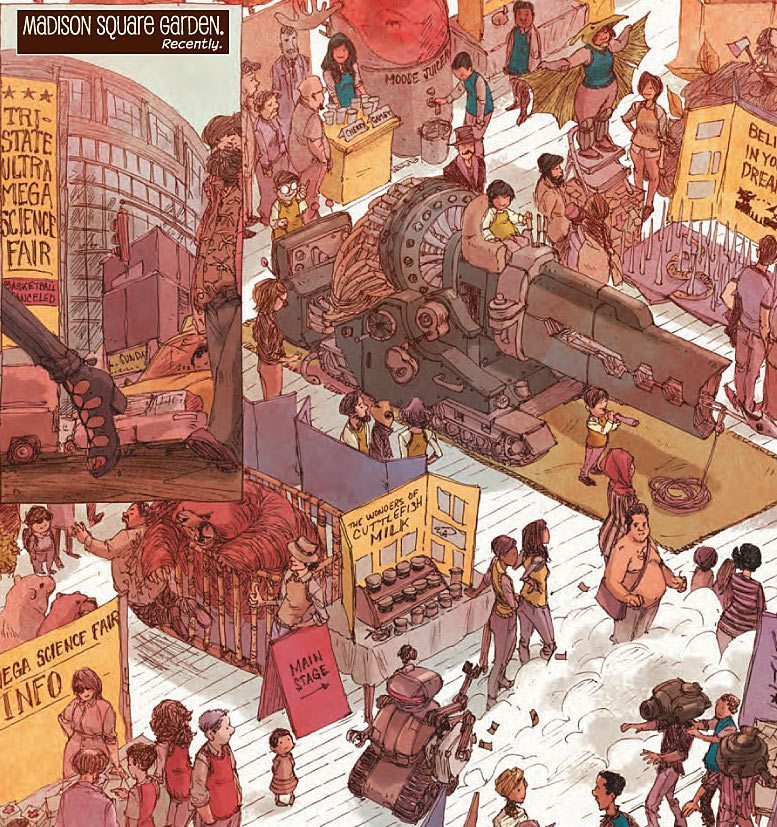 As the competition goes on, the characters on each side get more heated and take on more dangerous experiments. Meanwhile Kamala continues to try and avoid Miles, though several encounters suggest that the latter is suspicious of the former. Things come to head when Bruno’s final experiment, a pocket fusion reactor, explodes. Ms. Marvel and Spider-Man both race into action and get the civilians out with the help of fellow Avenger Nova. Later, the characters gather and commiserate on how much better things would be if they could work together for a common good instead of being pit against each other. The issue ends with a surprise cameo which implies the events within it are somehow important to the upcoming second CIVIL WAR.

My first thought after I finished reading MS. MARVEL #7 was that I couldn’t get over how old school it felt. At a time when Marvel and DC are both telling huge continuity altering stories, G. Willow Wilson crafted an issue reminiscent of the Silver Age. Everything from one of the heroes trying to hide their secret identity from the other to the conceit of two heroes brought into conflict with each other only to put aside their differences when they need to work together is right out of that time period. Even the concept of a giant science fair reads like something out of an early Lee/Ditko AMAZING SPIDER-MAN issue. I also liked how the issue hinted but didn’t confirm that Miles has figured out who Kamala is and chose not to say anything.

READ: Here’s our take on the preview issue of Marvel’s CIVL WAR II!

I enjoyed the throwback approach a great deal, and quite frankly would have been a big fan of the issue if there was nothing more to it than that. However, as usual, Wilson has a deeper theme at play. Over the course of the issue, the conflict between the New Jersey and New York teams escalates from simply competing over scholarships with small experiments to almost absurd personal animosity and small nuclear reactors, reminding me of the way superhero conflicts such as CIVIL WAR in general escalate. Initially, I thought I may be reading too much into the story, but Wilson essentially confirms it during an interaction toward the end of the book where Ganke openly complains about how good guys are always fighting each other for no reason and that no one really wins in those scenarios. While I enjoyed films like BATMAN V SUPERMAN and CAPTAIN AMERICA: CIVIL WAR, I generally do feel the superheroes fighting trope is overused, and I loved seeing Wilson tear it down in a book that was technically a CIVIL WAR II tie-in no less. 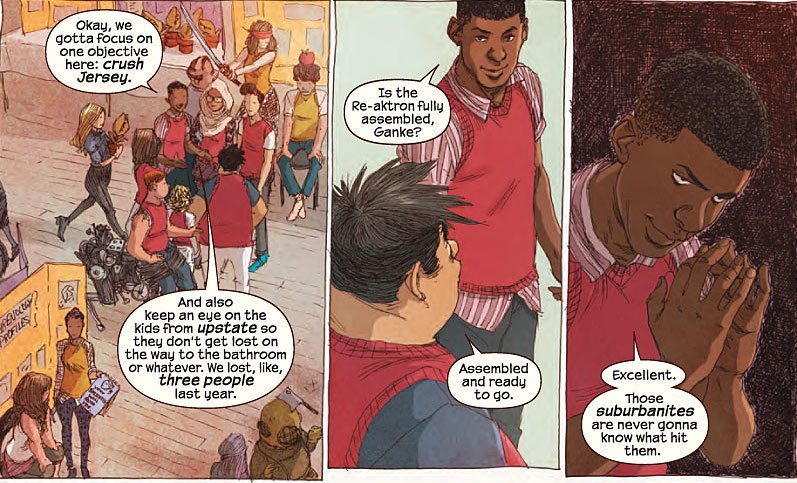 MS. MARVEL #7 sees Adrian Alphona return to the book, and as usual, I found the art to be stellar. He really captures the hectic nature of the science fair, which to my eye looked a bit similar to a comic book convention. I also really liked his version of Miles Morales. His version of the character looks a bit older and more like a teenager than most other versions I’ve seen.

The seventh issue of MS. MARVEL is a really fun Silver Age throwback issue. I would definitely recommend it to fans of the series or the Miles Morles version of Spider-Man. However, readers who see the cover and expect a full-on CIVIL WAR II issue may be a tad disappointed.