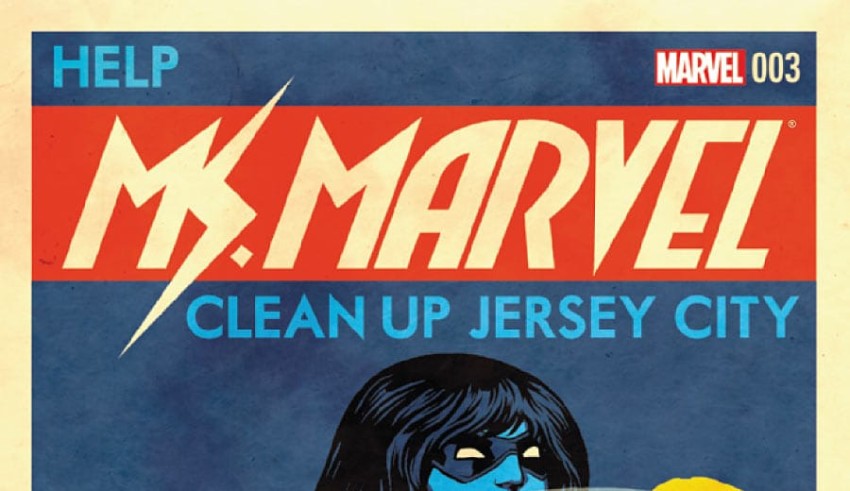 MS. MARVEL #3 kicks off with our heroine in a precarious situation, captured in a HYDRA warehouse after learning the villainous group was behind Hope Yards, the housing development that was trying to gentrify all of Jersey City with an airborne mind-controlling agent. On top of that, her best friend, Bruno, has been mind-controlled into doing the group’s bidding. Ms. Marvel is eventually able to fight her way free but is forced to leave Bruno behind.

Not knowing where to go next, Ms. Marvel remembers that Bruno had told her to go to the person who owned his heart (AKA his girlfriend, Mike) just before her abduction. She shows up in the girl’s bedroom in full super-heroic glory and recruits Mike to help her after the latter reveals what the “heart” Bruno was referring to actually was. 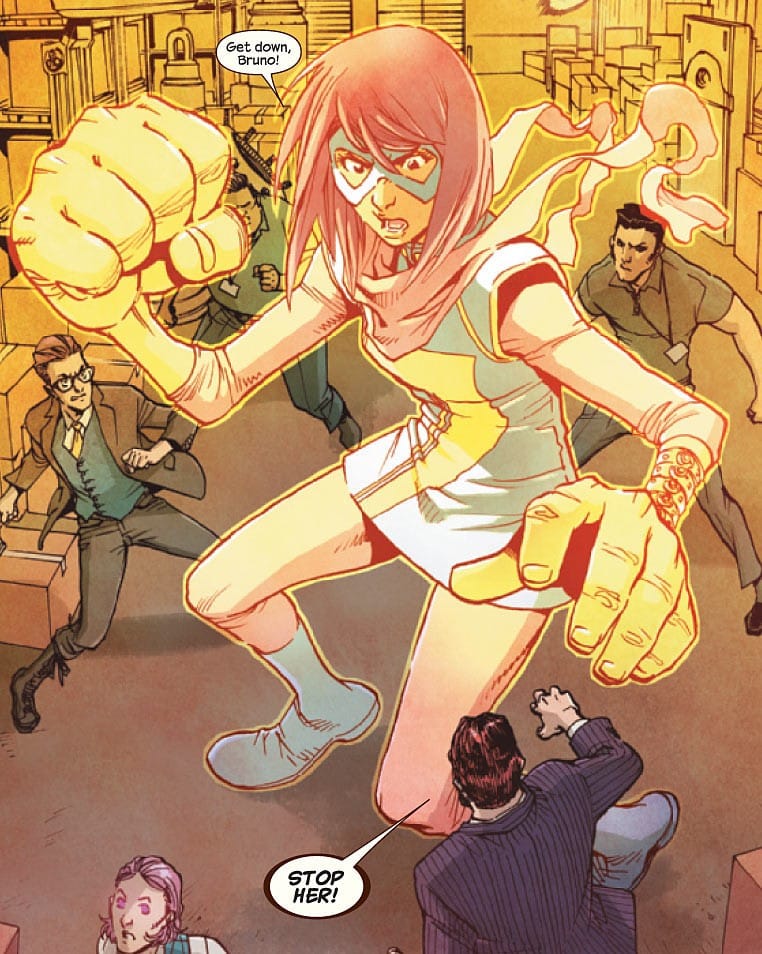 The two head to the school lab, with Mike talking all the while about how much she loves Bruno and how much she wishes his “best friend Kamala” would accept her, not knowing that she’s confessing all of this to Kamala. Before the conversation can go further, the two are able to access Bruno’s research from last issue and determine he had worked out an antidote for the mind-controlling agent.

READ: Behind on MS. MARVEL? Catch up on the All-New, All-Different series here!

Ms. Marvel and Mike release the cure the next morning during a major Hope Yards press conference, rescuing all the brainwashed citizens, including Bruno, and exposing Hope Yards as a corrupt villainous organization. The victory is short-lived, though, as the protestors who began picketing Ms. Marvel last issue (after Hope Yards had used her image on their billboards without her permission) continue to do so, believing that Ms. Marvel only exposed Hope Yards to try and save her own reputation.

MS. MARVEL #13 continues the spectacular run the book has been on since the “Last Days” arc of the previous series. Writer G. Willow Wilson is truly firing on all cylinders right now, adeptly combining the personal and heroic lives of her protagonist with a balance that’s rarely found in comics. The pairing of Kamala and Mike in this issue is fantastic, and a great way to introduce the characters to each other. I also really like the way the end of the issue presents Kamala, Bruno, and Mike as a group of friends. While I’m sure the Bruno/Kamala relationship drama will return to the series at some point, it makes sense to me that after realizing just how “in love” with Bruno Mike is, Kamala would embrace the two as a couple and grow closer to Mike. The Hope Yards/Hydra storyline takes a bit of a backseat to the personal story here, but it doesn’t feel shuffled aside; rather, it feels like something that the book will continuously weave into its narrative.

From a characterization standpoint, this issue is all about Kamala and Mike. As I said above, the pairing of the two is simply fantastic. I’ve been a huge fan of the Mike character since she was introduced in the first issue of this “season” (as Marvel refers to it in the letters page of the issue) of the MS. MARVEL series, and this issue cements her as a favorite even more. Wilson portrays her as a brave yet oddly normal person, who is so driven by the desire to rescue Bruno that she’s able to tune out what’s happening around her while at the same time clearly being freaked out by it. For her part, Kamala is presented really well, finally coming to terms with the Bruno/Mike relationship and seemingly embracing it by the end. 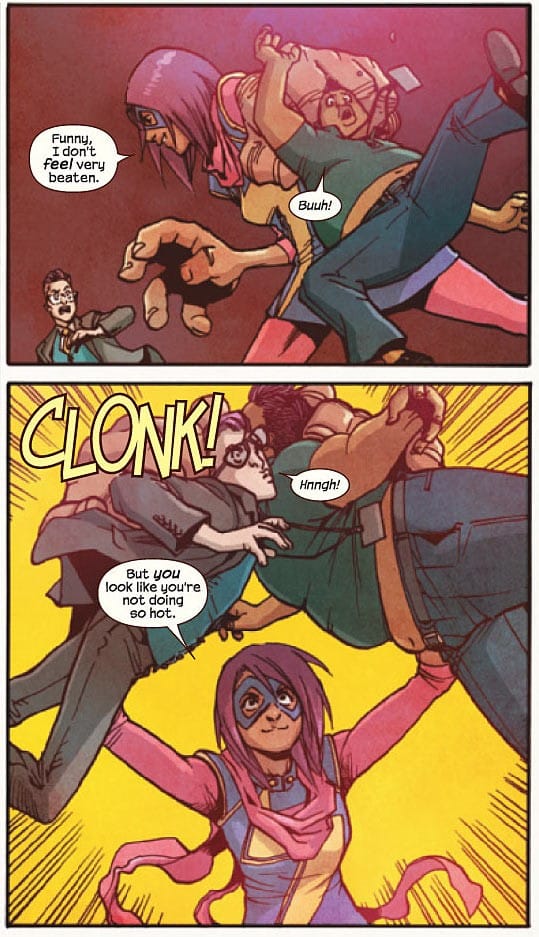 Takeshi Miyazawa, who has essentially become the second “regular artist” on the title at this point, does a really nice job here. I particularly like the way he illustrates Ms. Marvel using her powers during the opening warehouse sequence. He has a real knack for displaying Kamala growing and shrinking in an inventive way. I must admit, I think I prefer Miyazawa’s art on the title to the series’ original artist, Adrian Alphona.

MS. MARVEL #3 is yet another entry in the series’ strong run. With a well-structured plot, wonderful characterization, and inventive artwork, I can’t recommend this book enough.