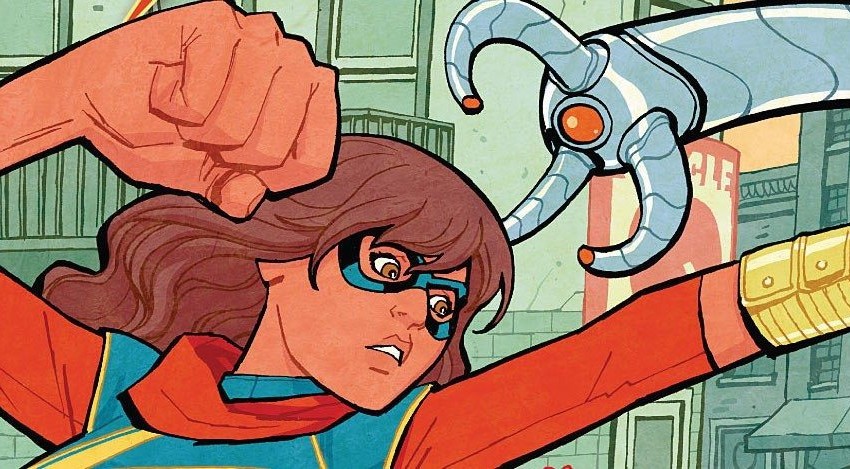 Picking up after last month’s fabulous first issue, MS. MARVEL #2 finds Kamala attempting to get to the bottom of the sinister Hope Yards Development and Relocation Association. 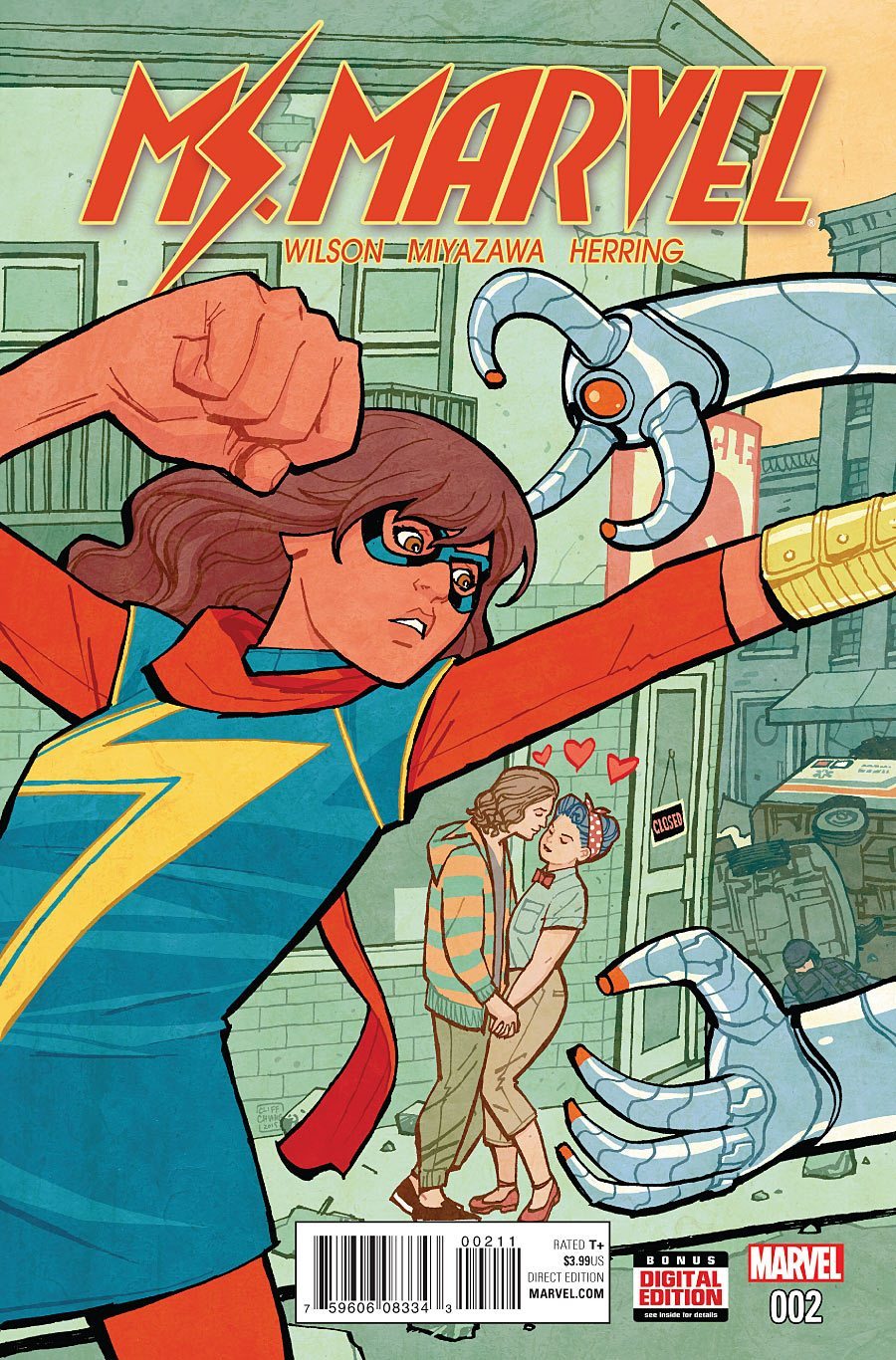 MS. MARVEL #2 begins with our titular hero breaking into the headquarters of the mysterious Hope Yards Association to find any clues to their motives that she missed last time. Her search is initially fruitless, until she locates a mini-fridge full of a mysterious purple sports drink that Hope Yards reps had been giving out. MM takes a vial but is once again attacked by the company’s guardian drones. However, Ms. Marvel easily dispatches the automated guardians since she was prepared for them this time. 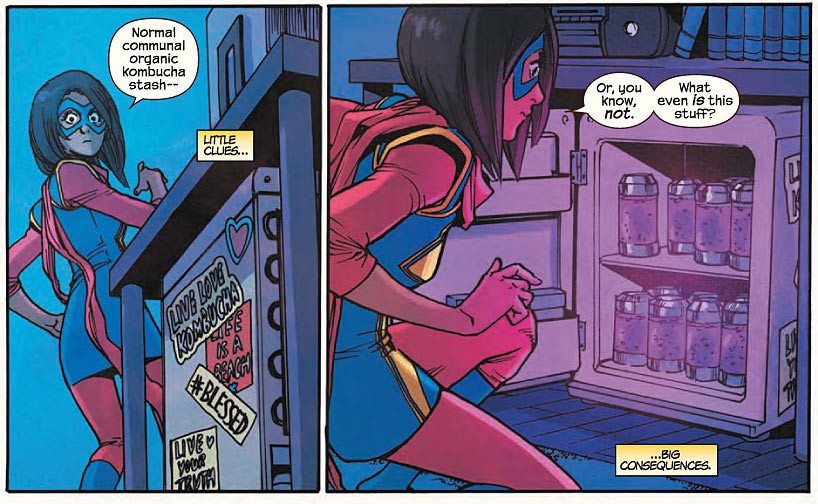 Kamala takes the mysterious purple liquid to Bruno’s house for inspection, and he tells her he won’t be able to conclusively identify it until he can work on it in the school’s laboratory. The two then discuss the anti-gentrification, anti-Miss Marvel protests (As we saw in the first issue, the Hope Yards are using an image of Ms. Marvel to try and sell their units, much to Kamala’s annoyance) which Kamala’s best friend Nakia has joined. Bruno then changes the subject to his new girlfriend Mike and her desire to meet Kamala, however she leaves before the conversation can progress. Kamala returns home, only to have her mother (who knows her secret, as we learned in the previous series finale MS. MARVEL (vol. 1) #19) tell her she should give up  super-heroics until the Hope Yards billboard situation is settled.

The next morning, Kamala’s brother Aamir sidetracks her walk to school and asks her to accompany him to meet a girl named Tyesha whom he’s interested in, as is Islamic tradition. Kamala, amazed that he’s interested in a girl, agrees to accompany him. However they find her being accosted by Hope Yards representatives. Furthermore, everyone else around the Hope Yards property is walking around in a trance-like state. Sensing something is wrong, Kamla takes off to change into her costume, promising Aamir she’d make it up to him.

After donning her Ms. Marvel duds, Kamala calls Bruno who informs her that the purple drinks contain nanotechnology capable of rewriting people’s personalities. However, before he can explain more, their call is cut short with Bruno’s cryptic last words being about Mike having the key to his heart. Just then, Ms. Marvel notices a convoy of Hope Yards marked trucks leaving town and decides to follow. She winds up getting into a fight with one of the Hope reps and gets knocked unconscious, waking up in a large warehouse with a brainwashed Bruno. From there, she learns exactly who she’s dealing with. I won’t spoil the big reveal, but I will offer a hint: Look really closely at the full name of the Hope Yards Development and Relocation Association.

MS. MARVEL #2 is another triumph from G. Willow Wilson and co. The plot doesn’t miss a beat, moving ahead with the Hope Yards forced gentrification storyline. While some my find the plot a bit too political or forced, I disagree. First off the theme fits really well with the established tone of the MS. MARVEL title and the character’s relationship with Jersey City. Secondly, I love how the dissolution and change of her home juxtaposes with the changes in Kamala’s personal life. Between witnessing a near-apocalypse, learning her mother knows her secret, becoming an Avenger, and all that happened with Bruno, Kamala’s life is changing at an alarming rate, and the changes in her city outwardly represent that.

LISTEN: History buff? Check out our podcast dedicated to CARTOON HISTORY OF THE UNIVERSE!

From a characterization standpoint, this issue was a total home run. All of Kamala’s interactions, be they ignoring Bruno’s desire for her to meet Mike, her conversation with her mother, or even her bemused agreement to aid Aamir, are all on-point. Speaking of Aamir, it was nice to see him and Kamala acting like brother and sister again. I was also a big fan of Tyesha in her brief appearance, though I will admit I, like Kamala, am a sucker for her Doom reference. 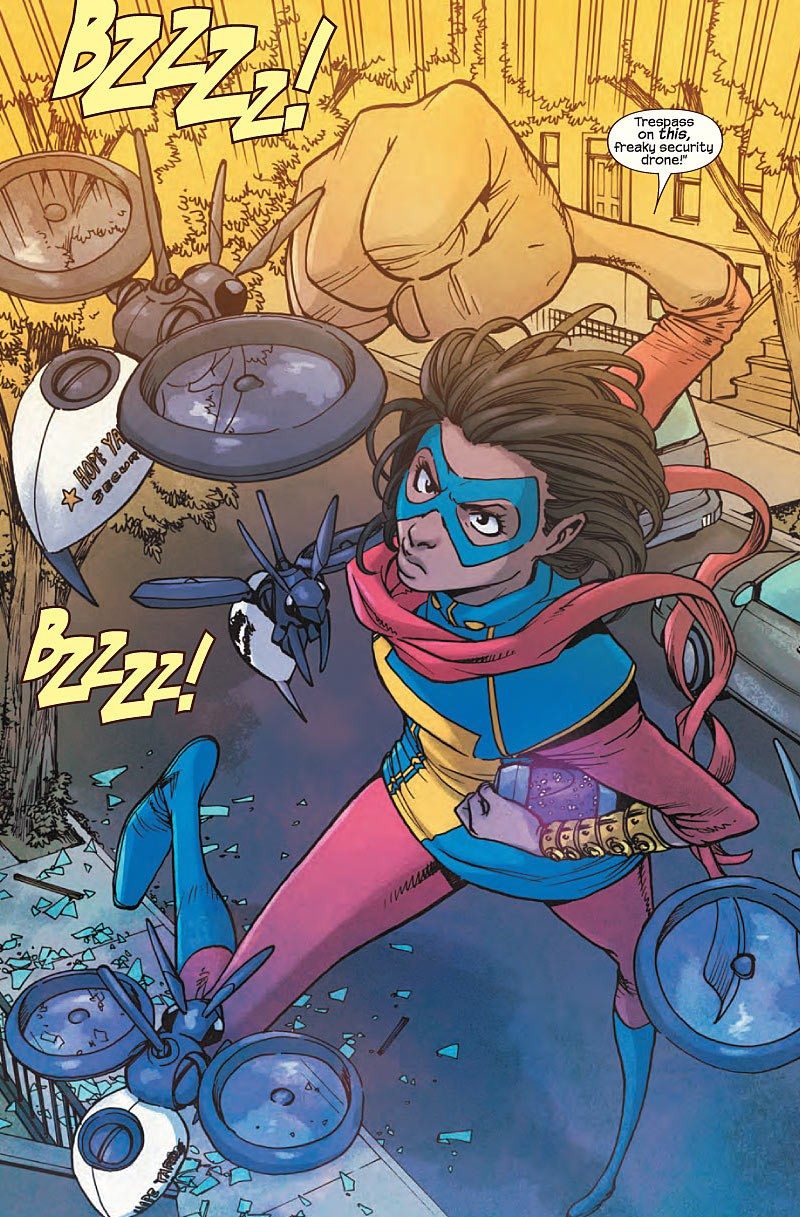 Unlike last issue’s split, the art in MS. MARVEL #2 is handled by Takeshi Miyazawa. While Adrian Alphona was the series initial artist and defined it’s look, I honestly prefer Miyazawa’s work on the book. He’s clean cartoon style really fits with the book and is best exemplified in the full page spread of Ms. Marvel dismantling the drone early on in the issue.

MS. MARVEL has been a hot streak since the “Last Days” arc, and it only continues here as issue two is another spectacular book. The plot, characterization, and art are all superb, and I would definitely recommend it to anyone.