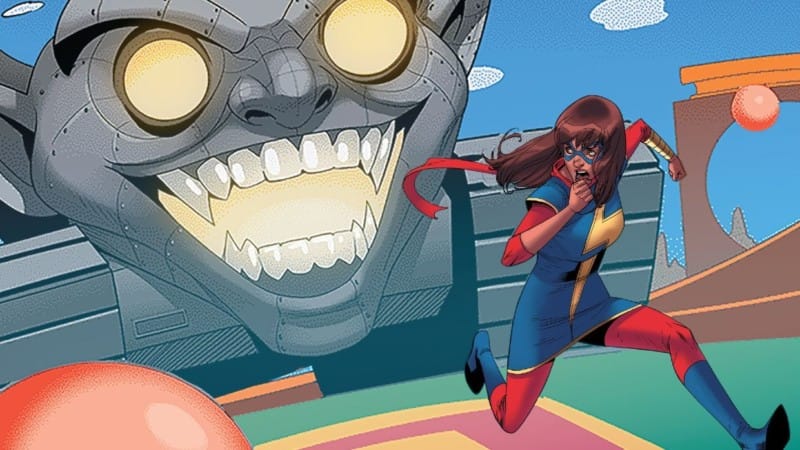 In the age of social media, where everything we say or do is recorded, it is easy to worry about how much of our personal lives are put at stake. What do we do when our vulnerabilities and secrets are exposed by bullies and trolls who simply wish to hurt others? MS. MARVEL #16 dives into this fear as Kamala Khan continues her battle against Dr. X, a sentient computer virus that threatens to reveal not only her secrets, but those of her friends as well. Another well-written story by G. Willow Wilson, this issue addresses the fears of an individual living in the digital age while simultaneously increasing the tension of Kamala’s struggle against an enemy whom she cannot defeat simply by punching. 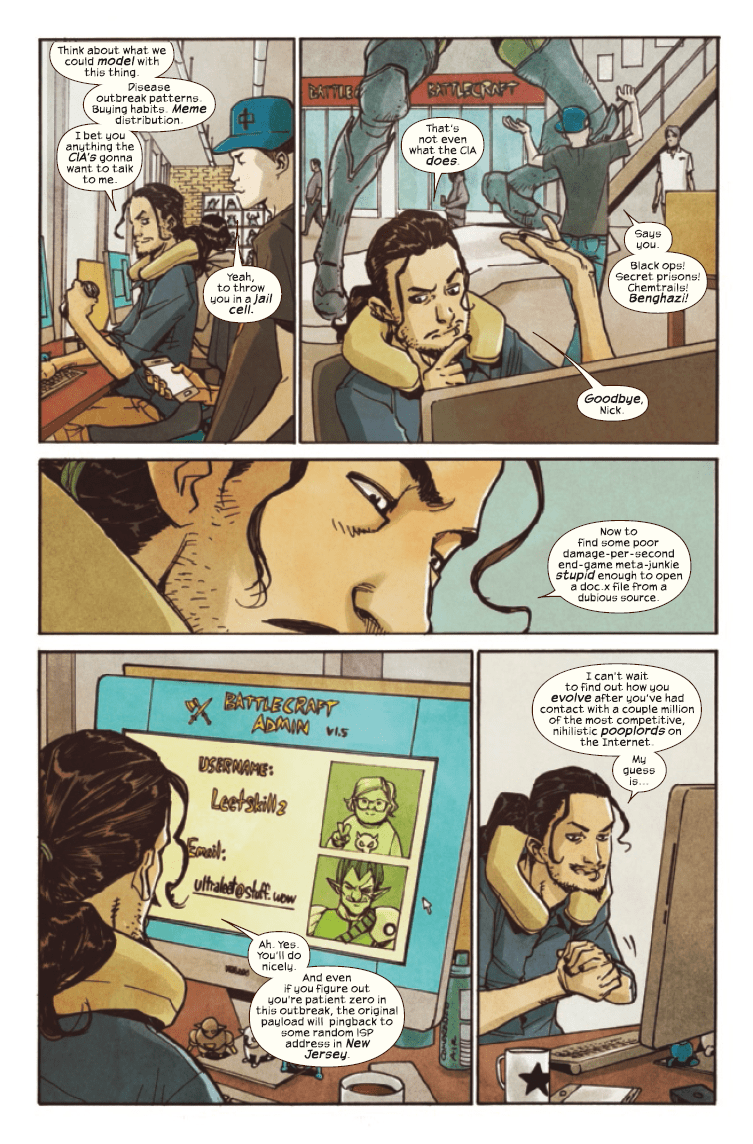 Taking place immediately after the events of the previous issue, Kamala finds herself under attack by Dr. X, who is revealed to be a literal cyber troll with the power to possess not only technology, but individuals as well. Unable to enter her mind, though, Dr. X resorts to blackmail instead, threatening to not only reveal her secret identity to the world, but also her friend Zoe’s hidden feelings for Nakia. Here, Kamala is faced with a dilemma: does she cave to the wishes of this bully, knowing full well that he will continue to hold her under his thumb with this intimate knowledge? Or does she stand up against the bully, risking the lives and secrets of those close to her as a result? Against this new, yet familiar threat, Kamala must learn the difficulty of taking a metaphorical bullet, something she acknowledges can be much more painful than a physical one.

READ: Why do trolls choose to act the way that they do? Here are a few examples that reflect the toxic side of social media!

Since her introduction to the Marvel universe, Ms. Marvel has been forced to take on threats that reflect the fears and anxieties one faces in the 21st century. In the “Generation Why” story arc, she fought against the stereotype that Millennials are a lazy generation, unable to contribute much to the world they live in save for offering themselves as human batteries in order to make a faux difference. In Dr. X, Ms. Marvel finds herself dealing with something metaphorically simple yet disturbing: a troll who represents our generation’s access to limitless information, as well as our abuse of that information for the sake of hurting others. In a world where people get attacked for things as petty as nationality, sexuality, and political beliefs, it has become much easier for trolls to use the internet, a place where their true face can be concealed, to carry out these aspirations. Like Dr. X, when others are hurt or afraid, trolls feel empowered.

Furthermore, this issue does an amazing job of incorporating the supporting cast of this series in dealing with this dilemma. When confronted with the two difficult decisions she is forced to make, Kamala defies both options and instead chooses a third one, informing Zoe about her current predicament. Not only does this defy the classic tropes of superhero stories, but it also gives the supporting characters of MS. MARVEL a chance to re-enter the main story after being sidelined for so long. When confronted with the knowledge about her sexuality being revealed by Dr. X, Zoe decides to let Nakia know the truth, a decision that shows how far this character has developed from the cliché bully character in the series’ first issue. While an obvious parallel to the fears of LGBT youth in being ousted early to their friends and peers, this decision allows G. Willow Wilson to progress one of MS. MARVEL’s major storylines in a manner that makes it feel natural rather than out of place. But most of all, it reinforces the importance of Kamala’s friends and family when shaping both this young superhero’s heroic and mundane life. 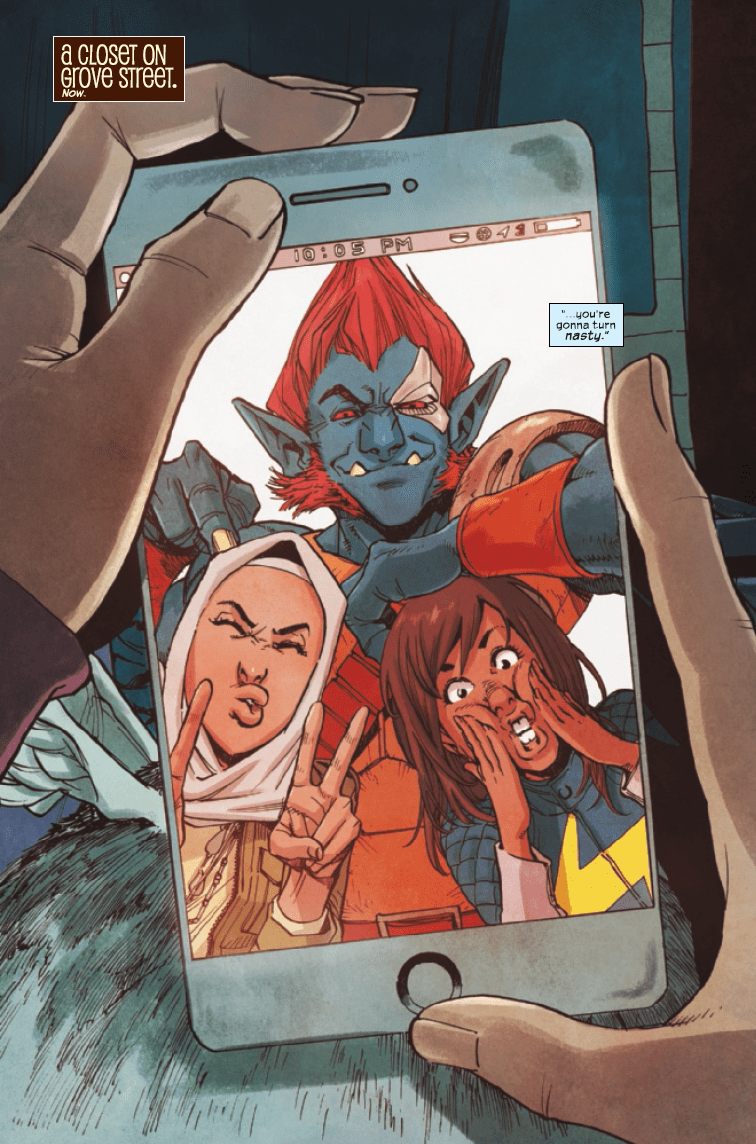 Once more, the artwork of Takeshi Miyazawa manages to capture the mood of MS. MARVEL in its dramatic, funny, and emotionally-driven moments. The design of these characters manages to be both realistic while slightly cartoony in order to capture the scale of its characters’ emotions and expressions. And this issue delves into a TON of expressions, with Kamala being forced to juggle feelings of fear, self-doubt, confliction, anger, and embarrassment, as well a brief moment of hope. Each of these faces is captured perfectly through each interaction between characters, something that makes up for the lack of physical action in the story. However, I think this focus on character rather than fighting works very well, as it reflects the conflict that Kamala is forced to deal with, relying on words rather than fists in order to win.

READ: We discuss more on why Ms. Marvel dares to disprove the cultural stereotypes of Millennials!

Following up the stellar storytelling of the previous two issues, MS. MARVEL #16 continues Kamala Khan’s latest story arc without skipping a beat. It perfectly replicates the fears of modern day problems within the superhero world, all the while never letting our hero submit to their toxic influence regardless of how badly Dr. X makes it seem. No matter how bad things look for Kamala, she never loses sight of the values that make her fight on and be a hero, setting a great example of how to face off against bullies and trolls alike.