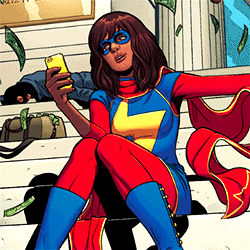 Kamala Khan is still reeling from a heartbreaking betrayal when her world quite literally starts falling apart around her. It’s the “Last Days” of MS. MARVEL! 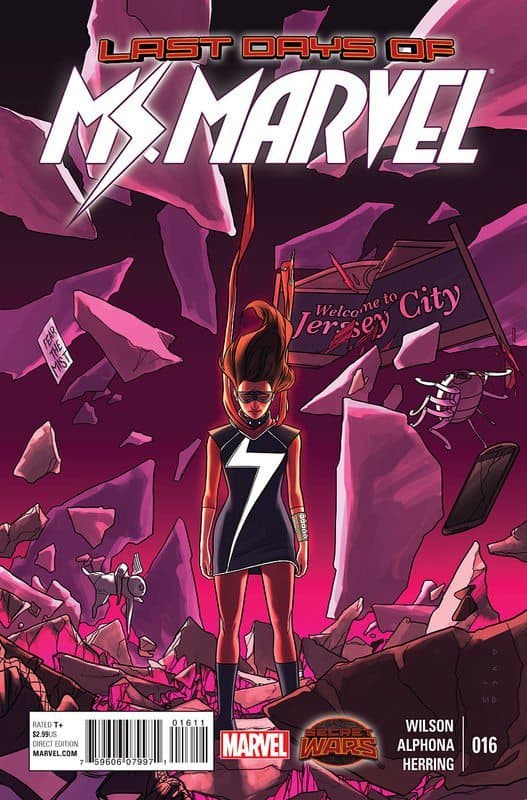 Last we left Kamala, she’d been betrayed by her crush Kamran and just barely escaped the group of Inhuman separatists he was attempting to recruit her into. Suffice to say, she was in a bad place. Three weeks later, we find that she still is. We find her sitting on the Jersey City waterfront gorging on hot dogs and venting her problems to a hot dog vendor as if he’s a bartender. Her funk is broken by streams of panicked commuters who begin spilling across the river from Manhattan… 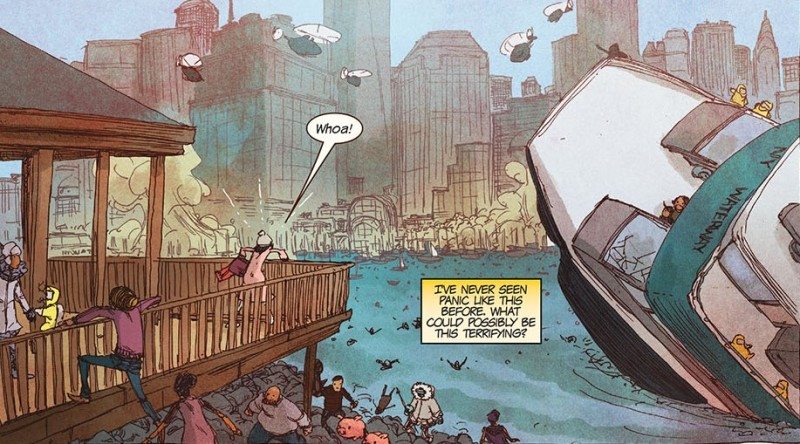 Springing into action, Kamala changes into her Ms. Marvel costume and begins travelling across the river by expanding her feet to a size that would allow her to float. Upon her arrival, she’s confronted by an even more panicked group of citizens who beg her to tell them what’s going on. It’s only then that she looks up and see’s a planet (which we readers know to be the Earth of Marvel’s Ultimate Universe) bearing down on New York City. Understandably freaked out, and realising that scores of panicked citizens are sweeping down on her hometown, Kamala heads back to Jersey City. 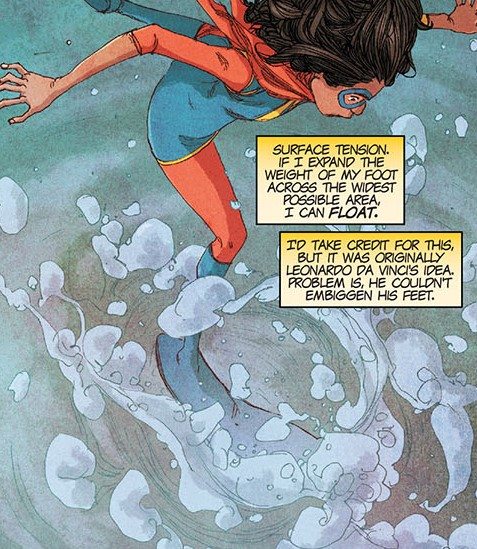 Deciding to check in on all the people she cares about, Ms. Marvel first heads to the corner deli  where her best friend Bruno and his brother Vick work. She’s able to easily fight off two looters, and tells her friends what’s going on and to get to the high school and set it up as a shelter before heading off to check on her family.

Kamala arrives home, but is shocked to find only Kamran in her house. Both power up, but instead of fighting he simply taunts her with the information that her parents are tranquilized upstairs, WHILE her brother Aamir has been taken to be exposed to the Terrigen Mists. Kamala angrily says that her brother would never align with them, but as Kamran leaves it’s clear he’s gotten into her head a bit. Kamala’s parents awaken, and after briefly explaining what’s happening she tells them to get to the high school before taking off, much to their dismay.

Things aren’t going much better at the school, as Bruno and several others are attempting to ward off looters. Just when they seem to be outnumbered, the mystical defenses Loki put around the school (see MS. MARVEL #12) activate and beat them back. Ms. Marvel arrives and inspects the shelter, becoming overwhelmed at the scope of all that is happening and doubting if there’s anything she can truly do to help. She heads up the roof to gather her thoughts, and is suddenly joined by her lifelong hero and inspiration, Carol “Captain Marvel” Danvers, ending the issue with the two finally on the verge of teaming up.

MS. MARVEL #16 is a strongly written issue, as is always the case from G. Willow Wilson, but it’s hamstrung a bit by it’s crossover-induced plot. While Wilson does the best she can with the end of the world concept, it feels too early in both Ms. Marvel’s heroic career and the series’ run to have this kind of apocalypse. There was much more room for growth in Wilson’s Jersey City than we’ve seen so far, and it would be a shame if this is the last we see of those plot-lines.

Also, Kamala’s heartbreak over Kamran also reads a bit out of character to me. While his betrayal was very well-executed, he’s only been a character for three issues. I can’t help but feel that the entire Kamran betrayal arc was supposed to go longer and had to be cut short for “Last Days.” This is not to say that the issue is bad however. It’s packed with Wilson’s trademark humor, with a particular highlight being Kamala’s conversation with the hot dog vendor early on, which is both a homage to and parody of the type of typical “bartender as therapist” seen in numerous forms of fiction.

Artist Adrian Alphona returns to the title after a three issue break and his return is welcome. His unwieldly, chaotic art-style perfectly complements the end of the world mood that overtakes the issue. Alphona’s visual gags, such as a hobo holding a sign that reads “i told u the end was nigh, now please buy my mixtape”, also return. The highlight page in my opinion is the last full-page panel featuring Captain Marvel and Ms. Marvel. It’s great to finally see the two standing together in costume, and the look of fear mixed with nervous admiration on Kamala’s face perfectly captures how the character would react at that moment.

MS. MARVEL #16 falls a bit short of the series’ lofty standards, though that has much more to do with the forced “Last Days” motif than it does the series’ creative team. That said, it’s still a better read than the majority of mainstream books on the stands right now, and should definitely be read by anyone interested in Kamala’s on-going character journey.