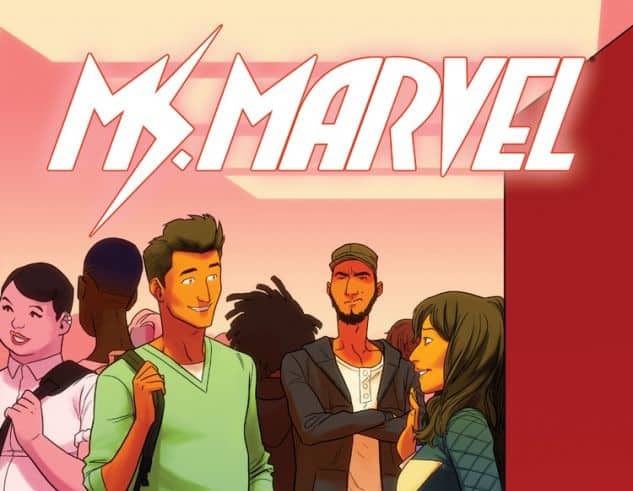 The third installment of the Crushed arc finds Ms. Marvel dealing with first broken heart and fighting for her life on the same day. Talk about a bummer.

The previous issue of Ms. Marvel ended with our titular heroine Kamala Khan in a bad situation. She had been abducted against her will by her Inhuman crush and imprisoned in a cell on the Inhuman island of New Attilan. She easily breaks out of the cell, only to find herself face to face with her (now former) crush Kamran, the villain Kaboom whom Kamala had defeated and injured two issues ago, and their apparent leader Lineage.

The fifteenth issue kicks off at that same spot, with Kamala confronting Kamran about taking her against her will after she’d refused to go with him, and him responding that she had no proof she was their against her will. Before the two can continue, they’re interrupted by Lineage who reveals the reason why they’ve kidnapped Kamala; he’s planning a coup in Inhuman society and he wants her help. She humors him while secretly texting an SOS message to her best friend Bruno. Receiving the message in the middle of class, Bruno races out of school, and after using a GPS locator to find Kamala, he races off to the island. 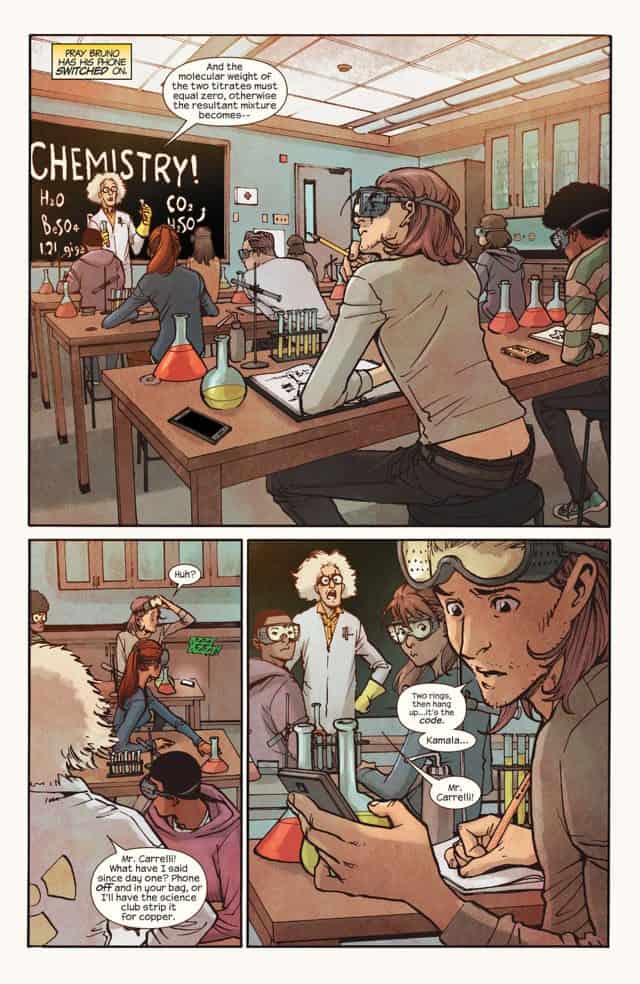 Meanwhile, Kamala escapes from her captors and takes off running through New Attilan. Using knowledge of the city’s layout that she’s aquired throughout the series to her advantage, she lures Kaboom to a training facility and sets off one of her personal training programs on its highest level incapacitating her. She’s next confronted by Kamran. After coming to terms with his betrayal and dressing him down as a nothing more than a “bad guy’s lackey”, Kamala changes into her Ms. Marvel costume and knocks him out with a massive punch. She continues looking for an escape route, eventually stumbling across Bruno who’d been captured by New Attilan guards during his rescue attempt. After freeing him, the two escape Star Wars style down in a garbage shoot. Meanwhile, Kamran begs Lineage’s forgiveness, but Lineage is unswayed, revealing that there is another member of Kamala’s bloodline with Inhuman genes that they can focus on.

From the title’s launch, writer G. Willow Wilson hasn’t shied away from tackling real life issues in Ms. Marvel, from religious and gender stereotypes to genetic experimentation and gentrification. Issue 15 is no exception, as the writer tackles the idea of consent and general rape culture. Wilson uses the typical trope of “captured hero” to explore these themes, with Kamala initially feeling she brought her capture on herself by going with Kamran. Later, Kamala comes to terms with the idea that she gave Kamran power over her identity and actions and that she must take said power back, symbolized by her victory over him in their battle. Wilson seamlessly weaves these issues into the book’s story without becoming preachy or sacrificing characterization. 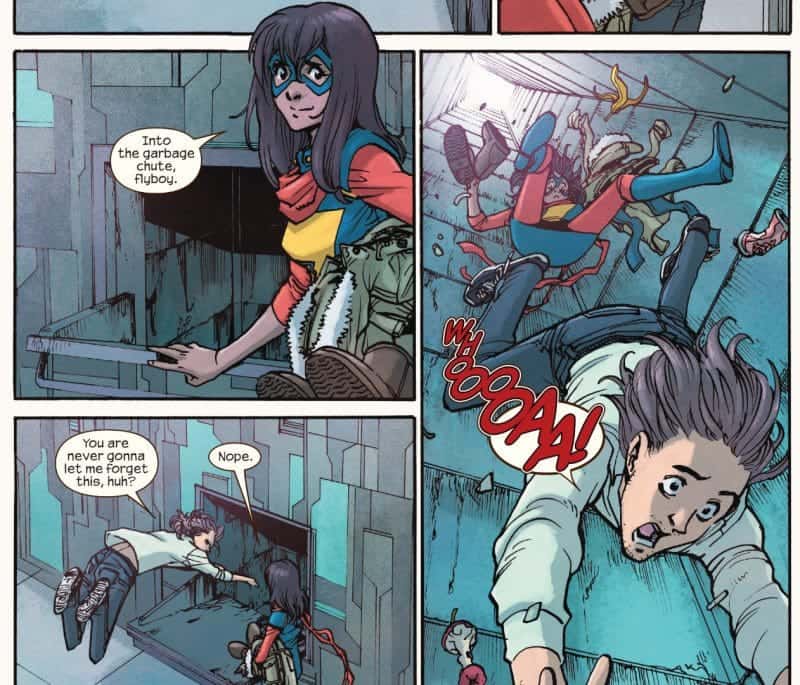 Beyond exploring the above themes, the issue is chock-full of the type of relationship building that readers have come to expect from the series. The big character relationship moments are supplied by Bruno and Kamala. Even after he was told by Kamala’s brother Aamir that his desire for a romantic relationship with Kamala would never come to fruition, Bruno still instantly rushes off to help her when he learns she’s in trouble. Later, after the two have escaped New Attilan, Kamala confesses how broken hearted she is over everything that’s happened, and narrates to herself that she’s glad she doesn’t have to face it alone. Wilson has developed a fascinating relationship between the two, building them first and foremost as platonic. While Bruno’s feelings have been apparent since the series started, he hasn’t let it interfere with their friendship. Kamala for her part has so far shown no romantic feelings for Bruno, instead leaning on him as a trusted friend and confidant. These types of male/female platonic relationships are all too rare in comics, and it’s refreshing to see one portrayed so strongly. Even if Wilson does eventually put the two in a romantic relationship, the fact that their friendship has consistently come first differentiates it from the normal development cycle of comic book relationships. Wilson also works in several of her trademark pop culture references, including Bruno’s teacher being Doc Brown from Back To The Future, the almost obligatory Star Wars reference in the trash chute scene, and a Star Trek reference that I won’t reveal, except to say that I’m shocked it took fifteen issues to get into the series. 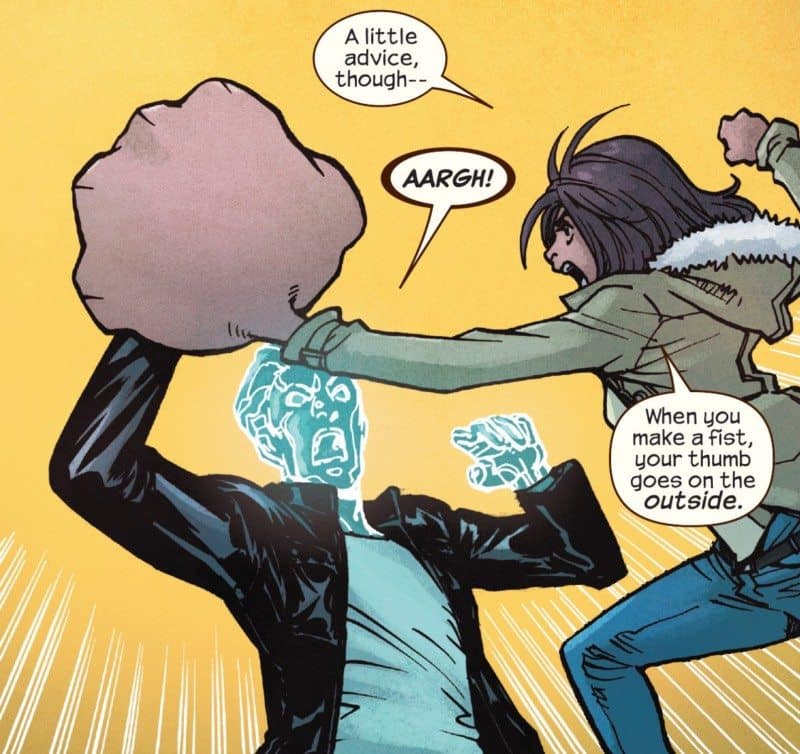 The issue marks the end of Takeshi Myazawa’s short run as the series’ artist, which is a shame in my opinion. Myazawa’s art brings a striking dynamism to the series, with every movement oozing kinetic energy. The fight scene late in the issue between Kamala and Kamran is particularly striking.

The one slight problem I have with the issue, which knocks it’s final grade down a bit, is that the arc as a whole feels rushed. Kamran was introduced as a character two issues ago. Kamala is introduced to him, falls for him, learns he’s an Inhuman, goes on a date with him, falls harder for him, is captured by him, realizes his betrayal, and defeats him battle all in the course of three issues. While the story is well told, and Kamran seems like he may be a reoccurring antagonist for Kamala, I can’t help but think that the story could have had even more emotional resonance had it been stretched out a bit longer. That said, Ms. Marvel #15 is still a very entertaining issue, with layered snappy writing and dynamic art.