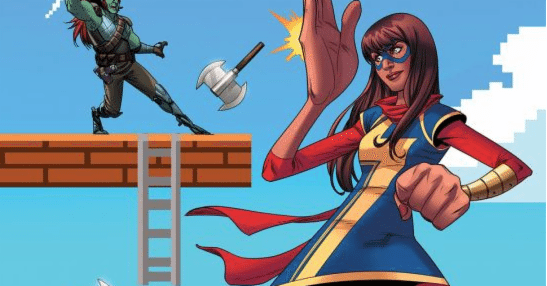 Since her inception into the Marvel universe, Kamala Khan has faced many modern trials. She has dealt with being a Muslim in America, debated the value of her own generation, and even acted as a spokesperson for the value of the election process. And in MS. MARVEL #15, Kamala faces a new, and sadly too real, trial of the digital age–the Internet troll; though since this is a comic book, it’s far more than that.

In the previous issue, Kamala met a fellow online gamer, who apparently knows her secret identity and is holding it over her. The fallout from this revelation weighs heavily on Kamala; her dialogue is wrought with the fear of all her secrets being revealed, and even her class seems shocked when she arrives at school.  However, Kamala isn’t the one who has their attention–it’s a fellow student whose private message was shared publicly, and is suffering the consequences. 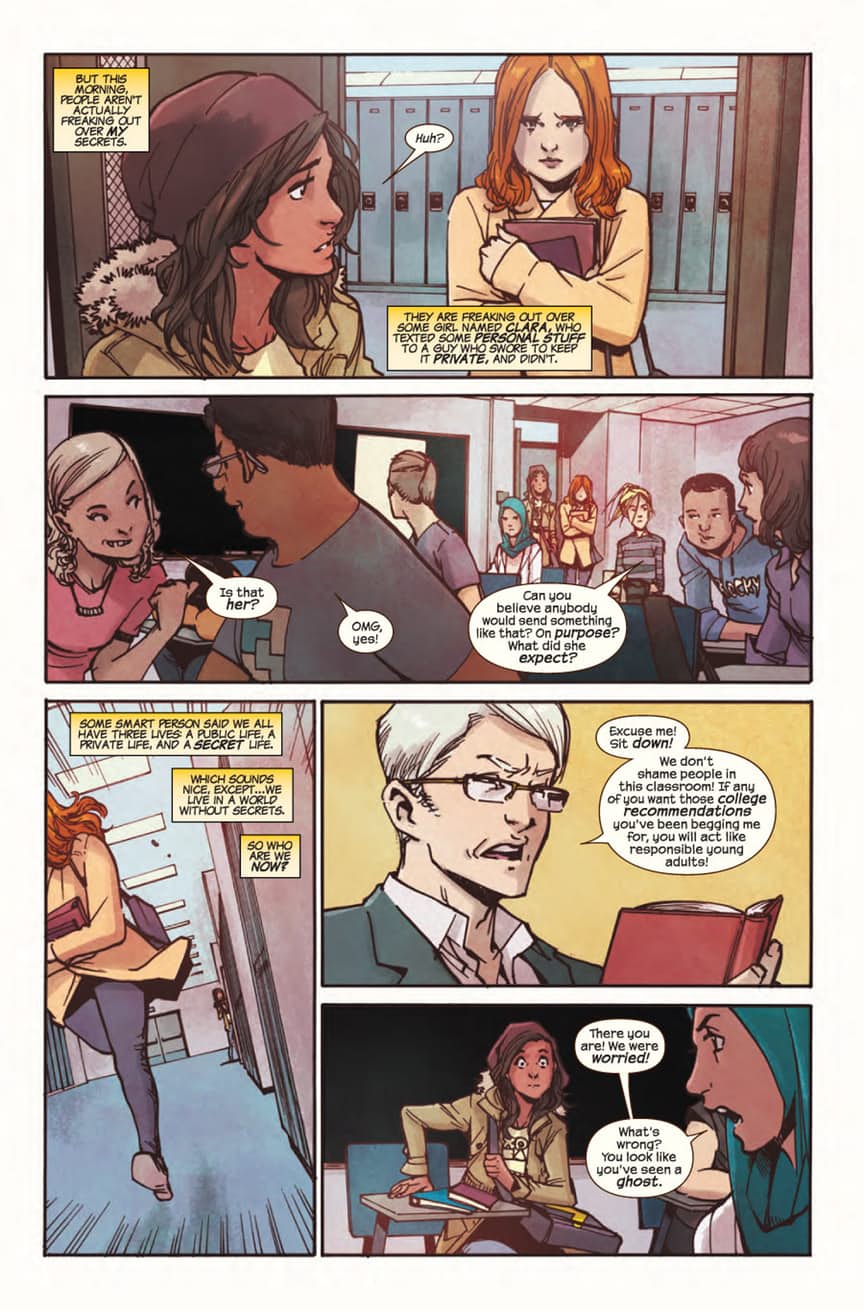 This is a brilliant device by writer G. Willow Wilson. Since Kamala can’t openly react to being trolled, Wilson uses others to emphasize the effects of trolling. Yet, trolling isn’t really the message this book is trying to get across. It’s the modern trial of how easy it is to obtain information, and how no one is entitled to a private life. There are no secrets, and everyone, therefore, feels pressured to be normal and unnoticed. While the first student elucidates how easy it is to be publicly shamed, Kamala’s friends, Mike and Nakia, convey how the fear of being singled out affects both of them. Mike is afraid to broadcast her woes because if she doesn’t act like the All-American kid with good grades, people will blame her moms. Nakia’s fear is similar–as the child of immigrants, she has to succeed or it will reflect badly on her parents and culture (though she notes that no one blames white culture when an All-American kid starts sniffing glue). It’s a hard truth of the modern age, that secrets are much harder to keep and any public flaws may lead to shame. So it’s even more important when Kamala invites the girl from her class to sit with them.

READ: How did the Internet become so dangerous? A look at how Internet culture has changed.

Kamala does eventually hunt down the troll that has been tormenting her, and the exchanges are both traumatic and empowering. Their first encounter is a virtual one, where the troll extols the glory of knowing someone’s secrets and making them freeze in fear. Artist Takeshi Miyazawa captures the moment beautifully, as careful facial expressions and body language show just how much that fear has gripped Ms. Marvel. Yet a few panels later, while the troll talks about how she does what she does for the fun of it, Kamala’s expressions change to those of anger and defiance as she demands a battle. 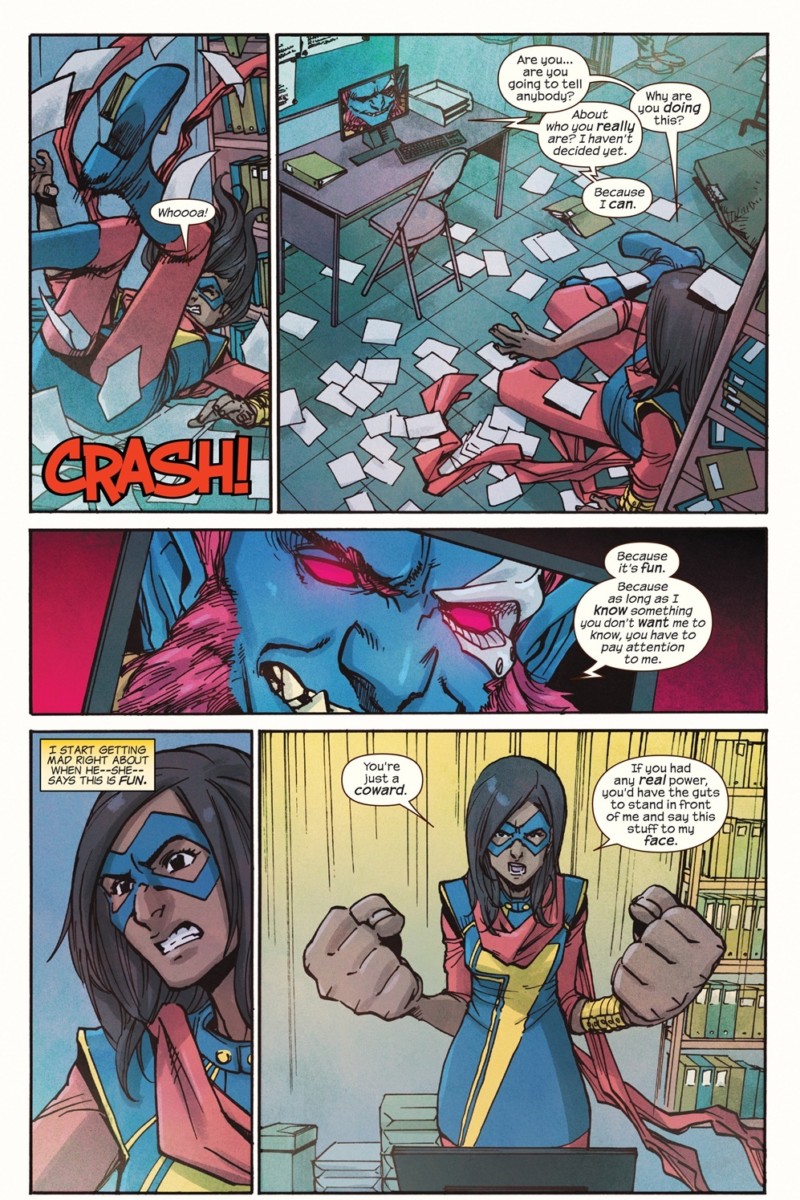 That battle happens right away too, as the troll is standing outside. However, the troll (a white-haired construction woman named Tess Beckford) is super-powered, and the two engage in a serious battle. The fight goes back and forth, highlighting the tension as both sides insult the other. Eventually, Kamala wins the battle, decrying Tess for hiding behind a computer screen just as the police arrive. But even as the police haul Tess off to jail, Kamala sees signs that things may not be as they seem. And as the issue ends with her reflecting on her fears, we see it’s not over just yet.

MARVEL #15 continues the series’ history of tackling modern day issues and stigmas with a strong story of defiance. Superpowers aside, this issue shows the trauma online trolling can produce and how being able to connect online carries a dark bag of tricks along with it. The troll’s reasons behind her actions ring horrifyingly true in the real world, as do the pressures that come with trying to stay under the radar. Kamala continues to draw in readers by doing what she’s best at–acknowledging the hardships of reality, and then doing what we all wish we could do with our problems.

Stand up to them.