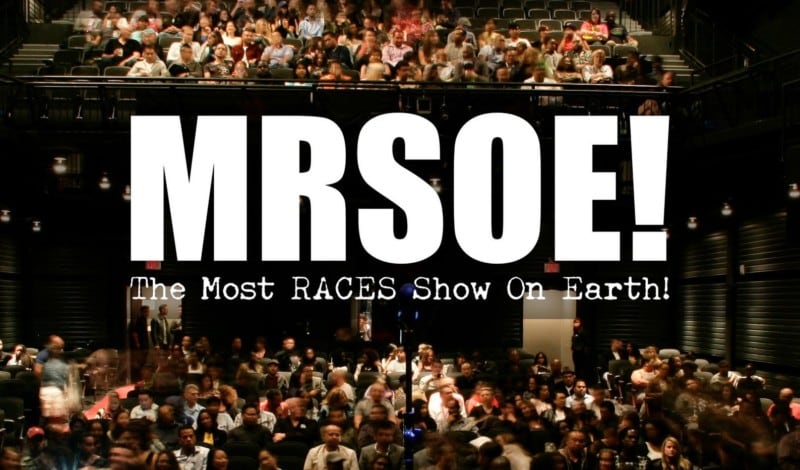 Diversity is an important component to what we are trying to accomplish at ComicsVerse. THE MOST RACES SHOW ON EARTH! (MRSOE!) is no different. In fact, it’s been founder Neil Bansil’s mission to provide a comedy line-up of high-quality acts with vast backgrounds and heritages. Diversity expands people’s understanding of each other and creates communities of love instead of misguided hate or fear. How could that be better explored than through a hilarious a stand-up tour that travels from Canada and select cities in the U.S.?

In our conversation with Neil, we discussed the importance of comedy, diversity, and, of course, the comics and experiences of starting his incredible venture THE MOST RACES SHOW ON EARTH!

ComicsVerse: What has comedy meant and done for you as a person?

Neil Bansil: To be honest, I don’t know where I would be without comedy. I caught the comedy bug in May of ’97 when I first went on stage at the famous Yuk Yuks super club in Toronto, and over the past 20 years, whether it be through performing or producing, I couldn’t see myself doing anything else. Comedy has taught me quite a few lessons like patience and perseverance. It’s taught me to be humble and to act with conviction, but more than anything, comedy has taught me that laughter really is a universal language and if we just take the time to experience it, the world would be a better place.

CV: How did MRSOE! get started? What has the process been like?

NB: THE MOST RACES SHOW ON EARTH! was created in late 2004 after realizing the lack of shows that represented the diversity of Toronto. As an aspiring comedian at the time, me and the comedians I did shows with were made up of all different cultures, but there wasn’t anyone catering to that. The major comedy clubs would present maybe one or two comedians of diversity every couple of months, but the majority of the comedians they presented was geared to only one market, so I decided to create a show that catered to everyone.

I also created it as a way of giving comedians from all different cultures a chance to perform on a “Big” stage.

We launched our first show in 2005 at a 350 seat venue called the Atlantis Theatre, which sold out, then the next year I rented the 710 seat Panasonic Theatre which the Blue Man Group used as their home venue, and I remember taking a tour of it during one of their shows and looking out over the sold-out audience and telling the theatre manager that I was going to do that as well, and I did.

I realize now that people were just waiting for a show like this. The thing is, Toronto is different than many other cities because people there are used to diversity. Everyone has grown up exposed to different cultures and religions, and we just gave people a good reason to reach out to their friends from every background to come together and have a good time.

CV: Why was this something you felt you needed to start?

NB: Toronto is known as one of the most diverse cities in the world, but during that time, in 2005, I realized that that diversity was not reflected on the major comedy stages. I felt that the people of Toronto deserved a show that was an authentic representation of themselves on stage. I realized that people just want a voice.  A seat at the table. I wanted to be the person that provided that.

CV: Has there been any negativity regarding this venture? How do you combat that?

NB: There’s always going to be people who don’t believe in what we believe, but I’m not worried about them. I don’t pay attention to them. I do the show for the people who embrace our message of diversity and inclusion. I do the show for the people who already agree with the notion that diversity makes us better. I didn’t create the show to change anybody’s minds or to be preachy, I’ve always just figured that if you’re somebody who doesn’t see the value in other people’s cultures, religions, sexual orientations, then it’s probably best that you don’t come to a show. Everything I put out on social media is me reaching out to the people who believe in what I believe, so if there’s someone out there who thinks differently or doesn’t have an open mind, then they don’t have to come to the show!

CV: How has the reception changed since 2005? Do you feel you get to see comedy and society evolve or, with the current political climate, devolve? Does the location of the show impact this?

NB: In 2005, we were performing to an audience in an already diverse city (Toronto) that more than anything just wanted to see a representation of themselves on stage. I remember looking out over an audience comprised of so many different cultures, ethnicities, and sexual orientations, laughing together in the same room and just thinking to myself that this is what I want for every show. In the past 12 years, since bringing the show to the U.S., I’ve seen the best and worst of audiences. Slowly but surely people are getting more used to seeing authentic representations of different cultures and customs because of exposure to shows like Aziz Ansari’s Netflix series MASTER OF NONE or Eddie Huang’s sitcom FRESH OFF THE BOAT. The exposure to these shows is making people more comfortable coming to a comedy show that focuses entirely on diversity.

The reception we get differs greatly depending on the location that we’re in. When we do shows in the South, there is such a deep divide between cultures that having a truly mixed audience is tough to achieve. I do see hope, though. The more we do the show, the more we attract the people that believe in the value of diversity and multiculturalism and we get closer and closer to a truly diverse audience. 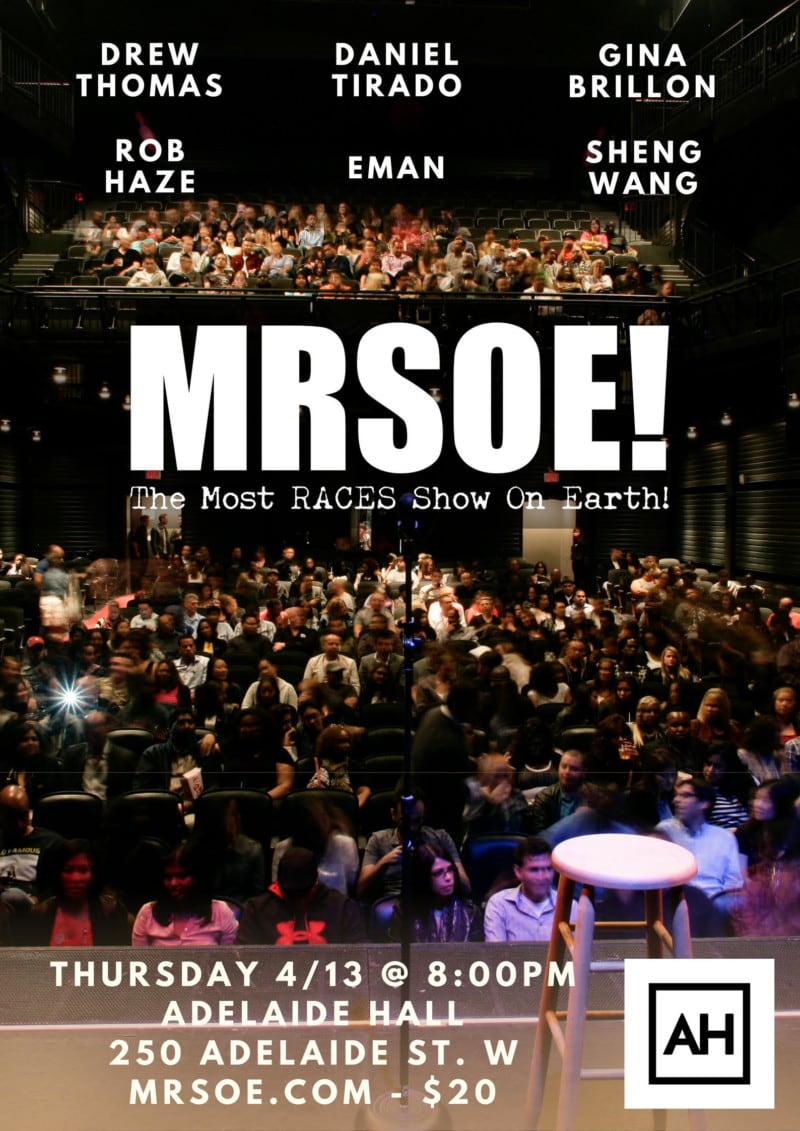 CV: What do you say to people who believe we live in a post-racist society?

NB: Unfortunately, racism still exists. In fact, the recent election just proves that racism is just as relevant today as it ever was. I think people felt like racism ended when Obama was voted into office, but all it did was create more of a divide and we see it daily on social media now that President Trump is in office. Just under 50% of the nation voted for Trump regardless of his views on women, religion, minorities, sexual orientations, etc. I’m not saying that everyone who voted for Trump is racist, but the one’s who are feel empowered by his win. It has emboldened racists to be louder and prouder. The good news is it has also lead to a stronger opposition from people like me who see the value in a country that embraces color, race, creed, or sexual preference. We’re out there too and we’re getting louder and doubling down on showing that racists won’t win.

CV: In your opinion would you say most racism is from ignorance? How do you personally deal with it besides comedy?

NB: I would agree with that statement. Most racism is from ignorance. I was lucky enough to grow up in a city that allowed me to interact daily with many different people from all different cultures and religions, however there a lot of areas in the country where people don’t have that opportunity. All they know is what their friends tell them, or their parents, or their teachers. They only get one viewpoint and treat it like it’s the law. People develop prejudices as a reflection of their environment, so if all they do is watch Fox News and hear their parents say how all Muslim people are evil, what can we expect? The thing is, everyone has a choice. The internet is free to everyone who goes to a Starbucks and uses their Wi-Fi. Just talk to someone who’s different than you. Spend some time with them. Most people will realize that we’re all the same and there’s nothing to fear. In my own personal life, outside of comedy, I think the best way of learning about other cultures is by traveling. Go to another country. Get as far away from your city or small town as you can and just go with an open mind. Eat local food, talk to people. I think you’ll find you’ll get a lot more smiles than you think.

NB: The biggest challenge would be choosing which comedians to perform on the show. There are so many amazing comedians deserving to be on it that it’s always difficult to choose the final roster for each show. The biggest reward is when audiences realize just how good the show was and can’t wait to see another one.

CV: What can you say about the comics this year?

NB: I’m excited about the comedians on the show this year. They each bring something different to the table that audiences will be able to appreciate.

Sheng Wang is making his return to New York after moving to L.A. 2 years ago to write for ABC’s hit sitcom, FRESH OFF THE BOAT. As a writer of a show that centers around an Asian-American family living in Orlando, Sheng is able to expose audiences to customs you wouldn’t regularly see on TV.

Gina Brillon is a Bronx native and another comedian making waves in the entertainment industry with her recurring role on CBS’s sitcom KEVIN CAN WAIT.

Eman El-Husseini is Palestinian, Muslim, Female, Lesbian Canadian living in Brooklyn. It’s just amazing that she hasn’t been deported yet.

Rob HaZe brings down south flavor to the show. Originally from Atlanta, Rob moved to Brooklyn a year ago and has already been named one of the top 50 comedians to watch in Brooklyn.

Drew Thomas is hosting MRSOE! and is a comedian born in Jamaica, but raised in New York and Atlanta. He’s seen it all and done it all and tours the nation regularly!

CV: Do you have any advice for aspiring comics, or even someone doing an open mic for the first time?

NB: If you were an aspiring comedian my advice would be to focus on the “work.” Don’t focus on fame or fortune, because if you’re just in it for that, then you’ve already lost. The only way to win in comedy is to put your head down, continually get better, and do it again.