The latest in the MR. AND MRS. X saga is undeniably the series’ most unique yet. Despite its intriguing strangeness though, the issue leaves plenty of aspects unexplored.

MR. AND MRS. X #7 begins right where its predecessor ended, with Rogue and Gambit suspended above a pit of hungry crocodiles. The newlyweds have absolutely no clue how they got there or who sent them there, but we do. It turns out that Mojo has transported the couple so that he can live stream their adventures to the rest of the Mojoverse.

He decides the crocodile plot is too boring, so he spins a Wheel of Genre to select the theme for Rogue and Gambit’s next challenge, unbeknownst to them of course. The wheel lands on noir, catalyzing Rogue and Gambit’s adventures in a reboot of “Honey-Moonlighting.”

Their adventures comprise of plenty of flirtation and fights in addition to an unexpected ending in which Rogue inadvertently kills Gambit! As a result, Mojo decides to commence a new adventure for the lone Rogue, a romantic one where Rogue finds herself pursued by Gambit’s replacement: Longshot.

MR. AND MRS. X #7 is undoubtedly a wacky addition to the series thus far. On the surface, it is engaging and actually quite entertaining. However, the issue does lack an overarching substance. Oftentimes, I found myself wondering what the comprehensive point was of Mojo’s schemes.

As a result, the plot of the issue often feels trivial, and, thus, the issue seems to miss the mark. 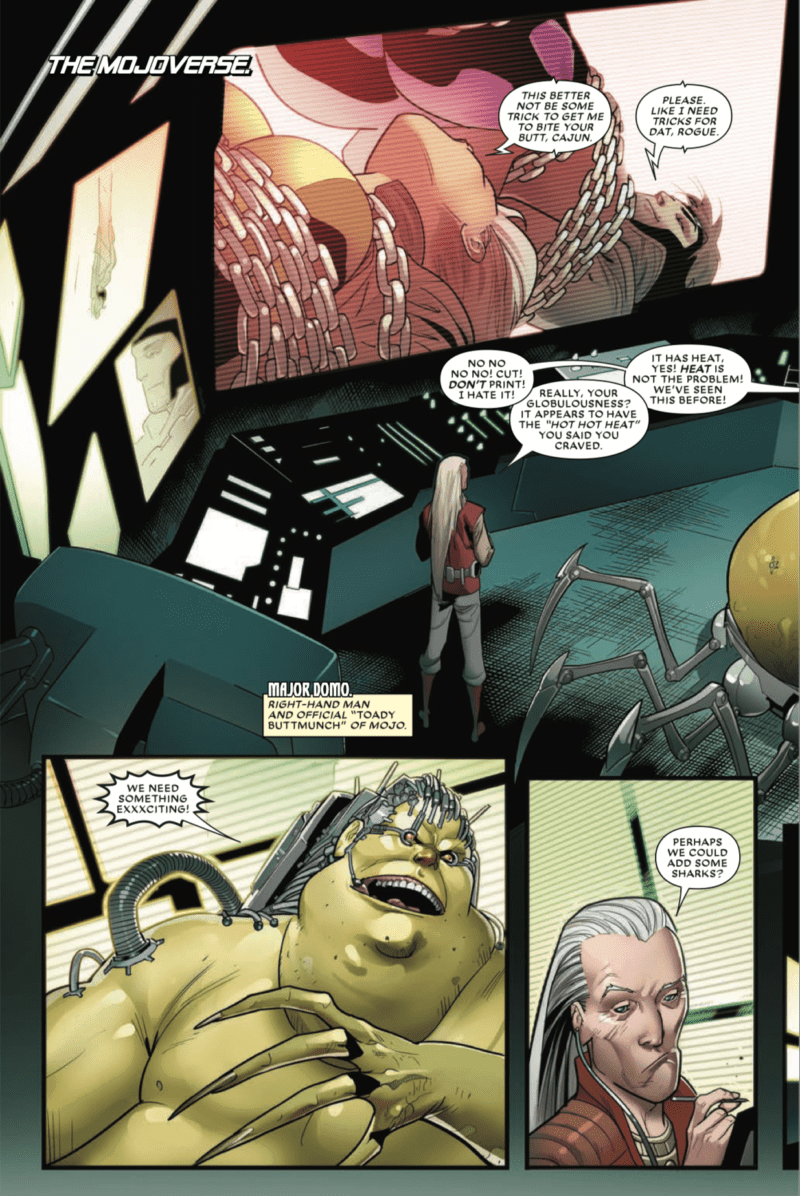 The art of MR. AND MRS. X has been a personal gripe of mine since the beginning of this series. Unfortunately, MR. AND MRS. X #7’s artwork only contributes to that gripe. With that being said, I do enjoy Terry Dodson’s cover for the issue. The image of Rogue breaking out of a Mojovision television is definitely striking.

In regard to the art in the issue itself by Oscar Bazaldua, I found myself especially disappointed in the noir sequences. I expected a grayscale palette or simply muted tones to contribute to the noir aesthetic. Additionally, the action sequence that comprises the noir segment feels quite static.

As aforementioned in previous reviews, the art of MR. AND MRS. X often comes across as one-dimensional. This issue is no different. Therefore, I feel as though the series is in need of more fluidity and attention to detail to truly bring a sense of cohesion to each and every panel.

Rogue and Gambit’s adventures in the Mojoverse have only just begun, yet Gambit has already been removed from them. MR. AND MRS. X #7 is definitely an eye-catching issue. It is inherently bizarre and entertaining. However, those aspects are not enough to hide the various issues within this installment.

I hope future installments present a more clearly defined plot. I also hope the next issues spend a little more time in the Mojoverse itself to give more context on the setting Rogue and Gambit have found themselves in.

Of course, this is the first of multiple issues in this specific arc. So, my gripes with this issue may very well be addressed in those to come.

So, we all have to wait and see how Mojo’s motives unfold and whether they will give this series a much-needed boost or not.