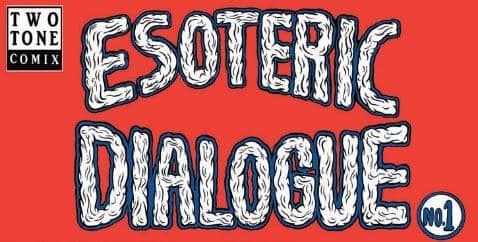 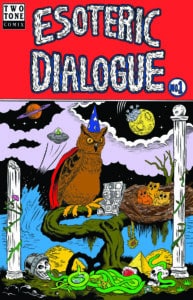 A group of five kids sit in the woods, playing a political version of tabletop game Dungeons &Dragons—except the world they’re playing to conquer is ours. The players in the game are represented by the big factors and figures that have had a defining role in the shape of human history and society—a banker, a politician, a war general, a priest, and a reptilian.

This is the first story to be featured in Esoteric Dialogue, a new comic series from Two Tone Comix team Scott Bufis and Matthew Salazar. Esoteric Dialogue is meant to be a series of one-shot stories that, as indicated by the title, is meant to explore little-known and potentially obscure topics, myths and ideas. In the prologue of this first issue, the team asks ‘who are the architects of society?’ The New World Conquest game these kids play, and their characters are meant to be the architects—the moves they roll and cards they play happen to be real-world events that have happened, or that people have believed have happened (looking at you, reptilian). Almost every player gives an impassioned speech about their role in creating society, which serves as context to how humanity has changed and formed into today’s society.

Just think of the possibilities….

The New World Conquest story works as a layered parody: on one hand, it mocks those who are constantly spouting conspiracy theories or trying to expose ‘the truth,’ and on the other it pokes fun at those who blindly believe everything around them. The idea that the ‘architects of society’ are really just kids trying to win a game is quite genius: it exhibits a power struggle, as well as the impulsive,
unpredicted ways of fate.

Again in the prologue, the writer states that their aim is to “present humorous and visually rich stories that give insight into these dark topics,” and I think they succeed. Human history is rich and complex but dark as well, and sometimes it’s nice to take a step back. We might be pawns in a game, but at least it’s a fun game.

The team behind Esoteric Dialogue strikes the right balance between funny, creative, irreverent and thought-provoking, and the art is highly complementary to its mysterious, secretive mood. It’ll be great to see what other ideas and sects they’ll tackle next.