When people think of fantasy, they often think of magic and dragons, staples of high fantasy seen in series like GAME OF THRONES. But Ulises Fariñas is crafting a very different experience for fans of the genre.

In the unique, MAD MAX-esque world of MOTRO, a young boy with superhuman strength is on a mission to save people, a task given to him by his late father. But the people he’s trying to protect aren’t overjoyed by his presence, he’s not used to fighting, and he’s up against “human and magical-mechanical” foes. So, sentient tanks instead of dragons (although those could always come later).

Co-written by Fariñas and Erick Freitas, featuring art by Fariñas, and with colors by Ryan Hill, MOTRO will be released by Oni Press on November 2, 2016. After reading the first issue, we had the chance to speak to Fariñas about how MOTRO evolved, the realities of violence, and what we can expect from the series. 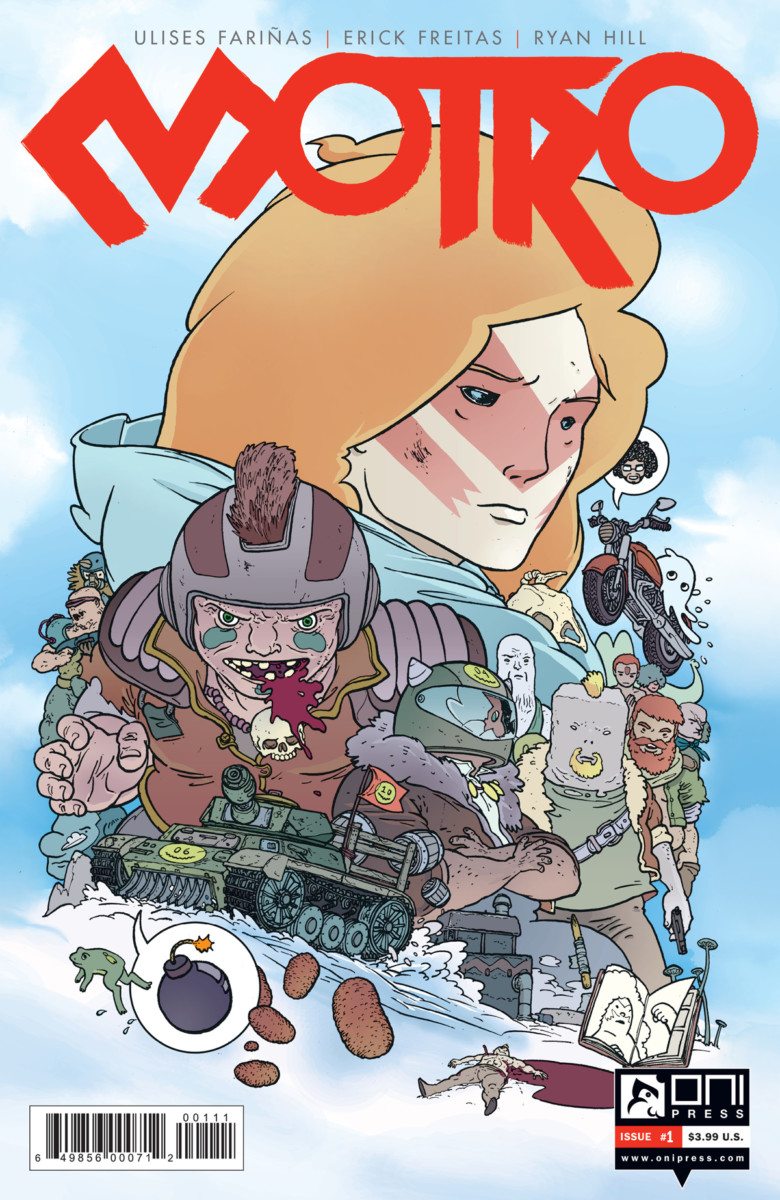 ComicsVerse: What inspired you to create MOTRO?

Ulises Fariñas: Fantasy is probably the most stale genre there is right now. It’s very rare that you see or read something that isn’t this bootleg LORD OF THE RINGS. If you’ve seen it done the same way a million times, you want to be Mr. Million and One who might add something new.

CV: You said in an interview with Sktchd that the series went through two main iterations, with the first one being PROTO MOTRO. What is PROTO MOTRO?

UF: There’s PROTO MOTRO and now Oni MOTRO. They are in continuity with each other, sort of, as PROTO MOTRO is a fictionalized account from the perspective of the main character that he draws in a journal. Later he has a whole group of artisans, who draw in the same style, draw an entire history of his life called the MOTREX CODEX.

RELATED: Interested in hearing more about Oni Press’ books? Check out our interview with Xander Cannon on KAIJUMAX

CV: I was able to find PROTO MOTRO on ACT-I-VATE, and the difference in art style between the two iterations is very apparent. In that same interview with Sktchd, you said that these versions came years apart, so it’s only natural that changes were made, but what was the thinking behind the difference in style?

UF: When I first created MOTRO, I was only a year outside of college, and the pathway to becoming a working cartoonist was not apparent at all. Despite spending thousands of dollars on a college education for cartooning, it in no way prepared me for how to actually get a job, so I was working at a bookstore. After working on over a hundred pages of PROTO MOTRO, I realized that I was being recognized and expected to work in a style that was too restrictive to be hired regularly as an artist for projects. So I reconstructed how I approached cartooning, and one of the first projects I tried this new sensibility with was with MOTRO. I’m still considered a very ‘indie’ creator, although I find that label meaningless since I’ve worked on fairly mainstream properties (TRANSFORMERS, JUDGE DREDD, STAR WARS), but having a more well-rounded style got me more work.

The different style did lead me to reconsider the story of MOTRO. The layers of what is ‘real’ for the character and for the reader were only made more complex with the style shift. 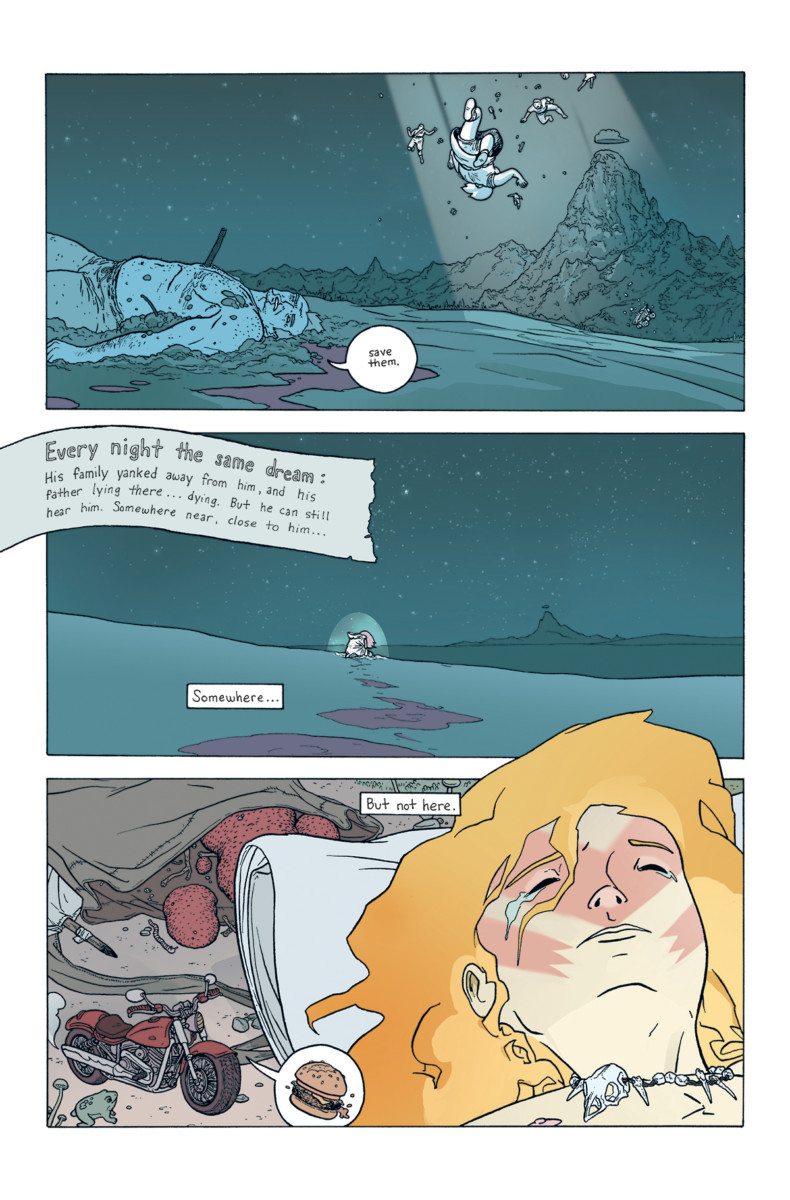 CV: How do you decide which projects you’ll take on as both artist and writer and which ones you’ll only write?

UF: I draw the comics I write mostly. Being a cartoonist in comics is the bottom of the totem pole. If you actually work on bringing the words to life—whether as a cartoonist, colorist, or letterer—you get no respect, no credit, and often less pay. Becoming a writer is a necessity when your creative work isn’t acknowledged in any other way. Writers are celebrated and exalted in the comics industry, and it’s pretty disappointing to see book after book be attributed to a single author. But since I can’t fix that problem by complaining, I decided to just begin writing first and foremost.

Besides my first answer, I draw comics when I want to work with someone I personally admire or it pays very well.

CV: You and your co-writer, Erick Freitas, have been working together since childhood, and have collaborated on books like AMAZING FOREST and GAMMA. Has that collaboration changed at all with MOTRO?

UF: MOTRO started before we formally began working together, Erick and I, so the DNA mix isn’t as 50/50 as most of our creations have been. But we’ve always looked over each other’s writing and given comments, so we are always each other’s unofficial editors at the very least, and full collaborators at the max, to the extent that it’s impossible to remember which story decisions belong to which one of us.

RELATED: Our thoughts on AMAZING FOREST #6

CV: You don’t reveal an awful lot about the world or the characters in the first issue. Beyond giving the reader incentive to turn the page, what influenced your decision to leave a lot of that for later entries in the series?

UF: I see MOTRO as a book that I’ll work on for my entire life. I’ll revise, reintroduce and reboot it as I see fit, so rather than writing from point A to point B, I dip in and watch what’s happening and describe it. That’s why my face appears in practically every issue. If you ever see the moon, that’s my face as the craters. The world is something I witness, and I don’t have much interest in doing tons of exposition for what’s happening right then in that issue.

CV: Compared to other series you’ve worked on, what is it about MOTRO that makes you view it as such a long-term project which you yourself might reboot?

UF: Maybe it’s because it’s my oldest project, and I can see how I’ve changed since I began it. But I also take this approach to many of my stories, seeing them like seeds that can grow into different plants, then shaping them like bonsais. 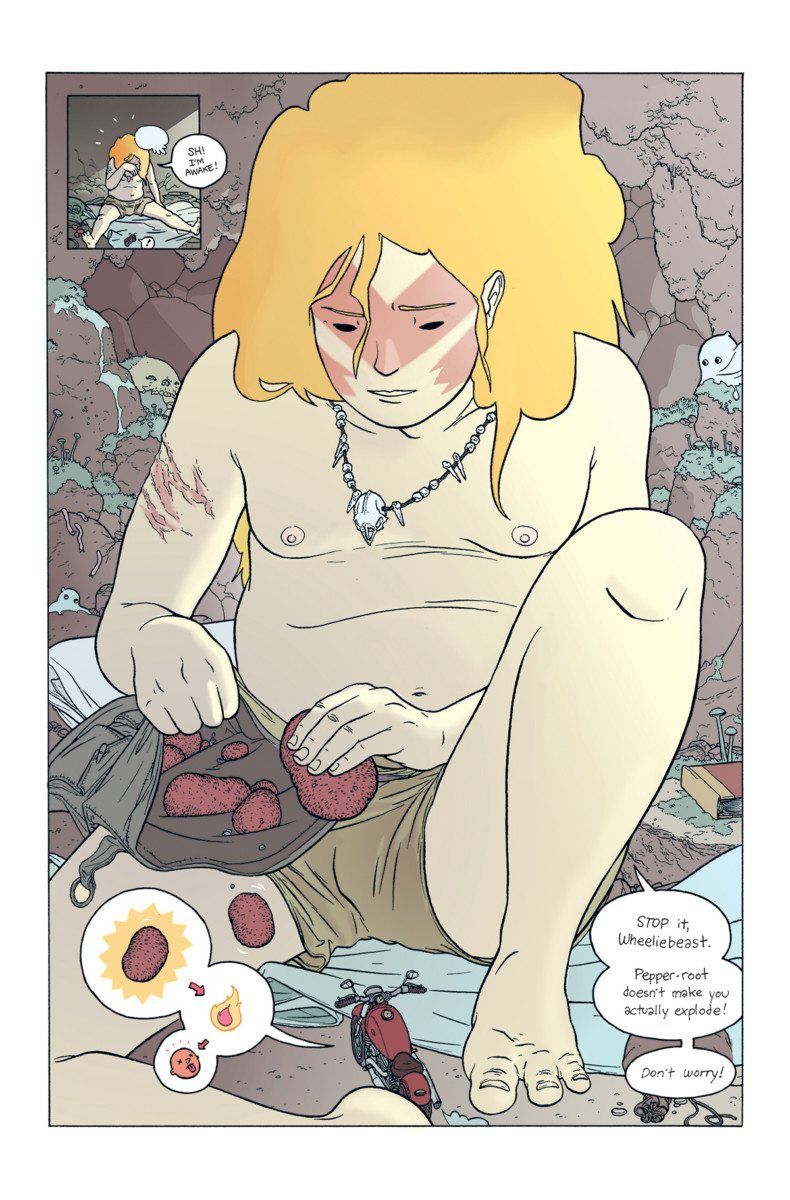 CV: One of the things that struck me about the main character is that he’s strong and knows what he’s supposed to do, but he’s not very quick to act on those instincts because he’s sensitive and scared. He doesn’t immediately start punching the bad guys. What made you want to have a main character like that?

UF: Because violence is scary, and violence is difficult. Many people have never been punched in the face, punched someone in the face, or had any physical altercation in their entire lives. When violence comes to them, it’s extremely traumatic. I wanted to show what a 12 year old boy really would feel like, even if you had super powers. I sure wanted super powers as a little boy, to stop the violence in my life, but even if I did, I’m afraid I’d still hide under the bed like I used to.

CV: The book isn’t afraid to go for some ridiculous moments of humor. How did you arrive at that type of comedy?

UF: I’m a very funny person when I’m not talking about the infectiousness of abuse and violence inherent to masculinity.

RELATED: Listen to our podcast on SAGA, another unique take on the fantasy genre

CV: Do you have an ending in mind for the series?

UF: Yeah. SPOILER: Motro kills everyone and eventually grows so old and tiny that he’s kept in a small glass castle that hangs around his child’s neck. Then the world gets better. 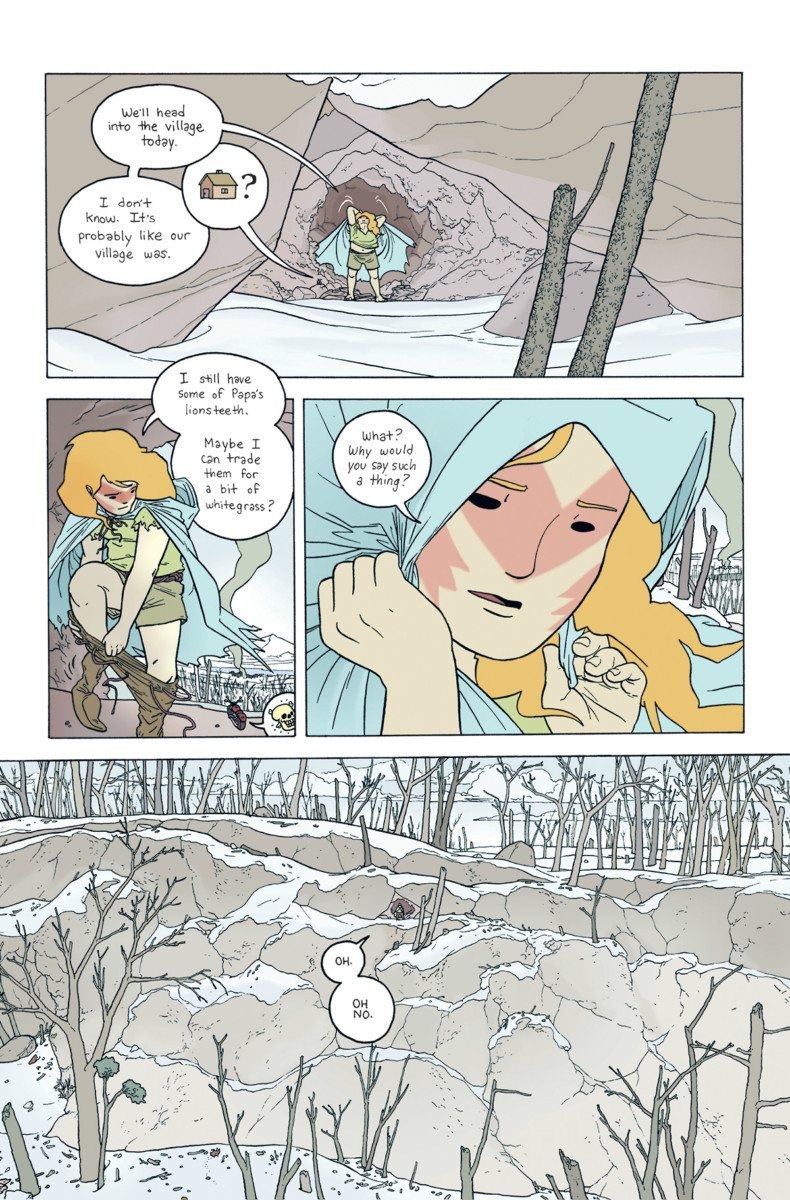 CV: What else are you working on right now that you can tell us about?

UF: I’m working on our first creator-owned book CLOUDIA & REX for Buño, the publisher I launched with Storme Smith, written by Erick Freitas and I, with art by Daniel Irizzari, which is about a family who becomes trapped in a giant mountain-sized tree while the Gods from all pantheons battle it out. Meanwhile, the family is coming to terms with how they accept that the Father/Husband has passed away and left a giant, mountain-sized hole in their family.

We also just finished a beautiful GODZILLA comic with Pablo Tunica, and the first arc of JUDGE DREDD, “Mega City Zero,” is coming to a sad/action packed conclusion.

This interview has been edited.