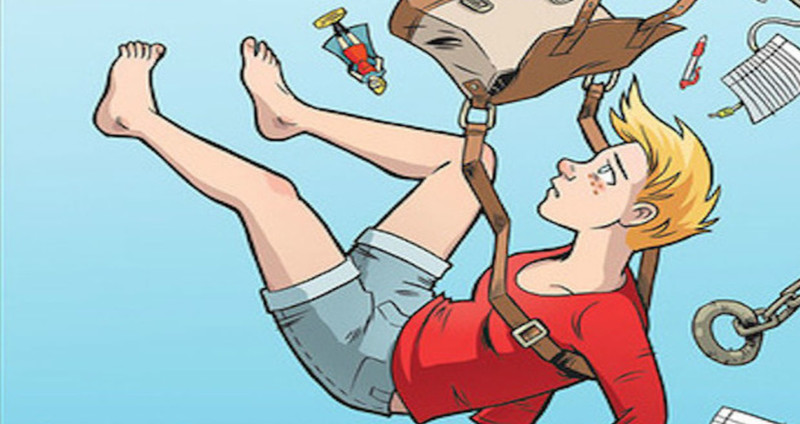 Racing isn’t really my thing. I know a bunch of people back home whose lives revolve around NASCAR, but I never got the appeal of cars dramatically turning left very fast. I thought racing shined brightest when a mustachioed plumber drove a go-kart and threw turtle shells at his competitors. Once again, comic books prove me wrong. MOTOR CRUSH, by Brenden Fletcher, Cameron Stewart, and Babs Tarr, melds the aesthetic trappings of the 2006 SPEED RACER movie but adds a compelling plot to match. It takes the concept of bike racing and adds a stunning futuristic style to it.

WATCH: Check out our interview with MOTOR CRUSH‘s creators!

Imagine a world where media-streaming robots follow your favorite sports figures every move; where seemingly supernatural fuel causes bikes to go so fast that one can hardly follow their trails. Imagine a world in which bike racing dictates who’s in control and who falls off to the sidelines. This is the world of MOTOR CRUSH.

The story follows Domino Swift, a newcomer to the motorcycle Grand Prix. She’s a rookie, yet her speed and talent make her one of the most promising racers in the circuit. However, a huge reason for her victories is her use of Crush, an illegal substance. She gets her Crush from illegal street races that involve brutally battering your opponents until you’re the only one left standing.

Normally, people apply Crush to their bikes to cause them to go faster. For some reason, Domino must consume an inhaler’s worth of Crush to stay alive, let alone race. So when a boy from her father’s garage steals her stash, it sets off a chain of events that forces her to question who she is, if she’s human; and why she needs Crush to survive.

Despite largely taking place on motorbikes, the story itself starts off fairly slow. It takes time to develop the world of racing that Domino finds herself in, really letting the place introduce itself before adding new twists. After you read something as exciting as the races, it’s hard to come back down from that high into a more evenly paced story. However, once the true plot begins, MOTOR CRUSH becomes impossible to put down.

READ: Want to know more about the first issue of MOTOR CRUSH? Here’s the review of it!

Personality as Vibrant as the Colors

I wasn’t certain about Domino at first. She seemed like she’d be fairly standard fare for a strong female protagonist: tough and refusing to listen to anyone’s advice. As the volume continued, however, it became clear that a large part of her insecurities derived from her lack of knowledge. Domino desperately wants to know who she is and why she has to live as she does. Despite her desire for answers, she knows the more she finds out, the more likely those around her will get hurt. That’s why she drove Lola, her ex-girlfriend, away, someone who desperately wanted to get close to her. Though in the end, it’s clear Domino’s hard exterior is just that — an exterior. She cares so deeply for her friends and family that you really begin to sympathize with her.

The volume oozes a “coolness” that fits the subject matter of extreme sports. Not only does it do conventional bike racing well but thrilling scenes where Domino has to knock her opponents off their bikes to win Crush are also done well. Artists Stewart and Tarr will have Domino flying through tunnels, dodging cars and evading her enemies in such exhilarating sequences that it’s surprising her bike doesn’t run off the page! I do love the additional nods the artists make towards extreme sports. For Domino also appears adept at skateboarding, and can escape from people using such means. All the images in this book are fast-paced, matching the theme of the story well.

At the end of the day, MOTOR CRUSH manages to race into the hearts of those who read it with a truly exhilarating science fiction story. The characters endear themselves quickly and never appear one dimensional, even if they are merely characters in a comic. The art allows for beautiful settings and intimate character moments that contemporary comics could learn from. It’s a ride unlike any other.