MOONSHOT: THE INDIGENOUS COMICS COLLECTION Vol. 1 is out as of November 2nd. This volume is a collection of 13 short comics that are retellings of ancient Native American folk stories. However, they are more than that. MOONSHOT is a work of art. Some stories are told in traditional comic form, but some are not. One story is told almost completely with words and no pictures, and one is told with pictures and no text. However, all of them tell stories that are very important to Native American heritage. The stories do not focus on a singular tribe, but on many of the different tribal identities within North America.

READ: Want to read about the representation of Asian cultures in Western Media? Here’s a roundtable discussion from some of the ComicsVerse staffers!

The art in this collection of stories is stunning. It is really, very beautifully done. The second story is the story of Ochek, which takes place during a long, cold winter. The art reflects this perfectly: the harsh, jagged lines mirror the biting cold and the bitter landscape. Some panels are colored with oranges, reds, and yellows to portray the characters when they’re warm. Once the characters venture into the cold, however, the colors change drastically: they’re replaced with shades of blue, white, and black. 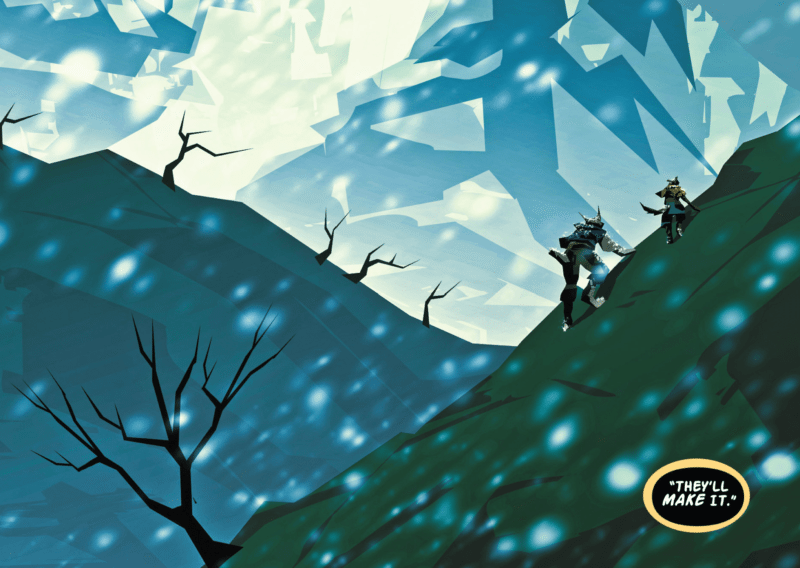 Many of the stories in this collection are just as beautiful as the art; however, because the stories in MOONSHOT: THE INDIGENOUS COMICS COLLECTION Vol. 1 are folk tales, there are not many traditional plots present. Many of the stories are meant to be lessons or just accounts of beings from the spirit world. This in no way takes away from the comic, though. The stories flow together in a captivating way, and almost create an overarching plot of their own; they create a plot where the histories of many cultures can be seen alongside each other, creating a beautiful pattern of spiritual and fantastic stories.

Due to the spirituality of the stories, there is an alluring air of mysticism present. However, these cultures should be respected rather than romanticized. In their comic HOME, Ian Ross and Lovern Kindzierski state, “In my youthful exuberance I did not give the respect I should have to the artifacts and remains I exhumed. I, like most white people, believed I owned what I found.”

This line is very relevant to how Native Americans have been treated over hundreds of years due to colonization. Even today they are met with mistreatment, with recent events like the crisis at the Standing Rock Reservation. Non-Native Americans should examine themselves and their views of Native American cultures, and use their privilege to aid in ways that they can. A beautiful culture is at risk, and these stories are only one way that will help it to be preserved.

READ: Interested in Andrew Jackson? Check out this article on his removal of Native Americans from their homes, and his (long overdue) removal from the $20 bill! 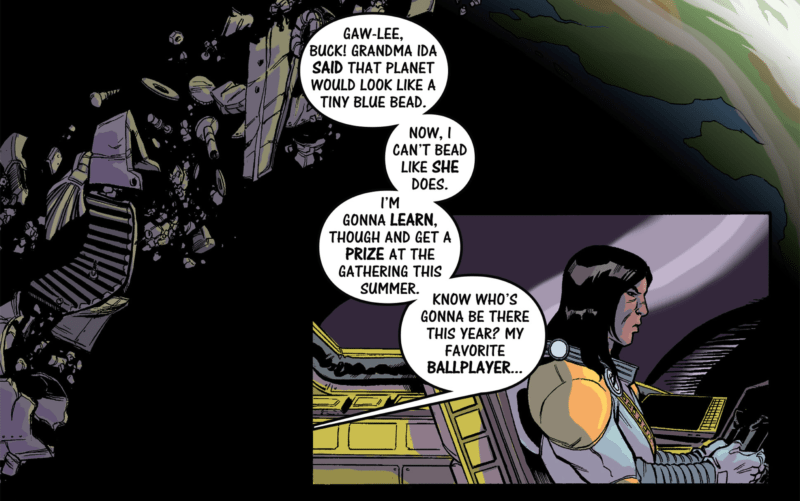 Where there is characterization, however, it is very well done. Arigon Starr, for instance, wonderfully executes this in UE-PUCASE: WATER MASTER. This story is a retelling of a Muscogee Creek story set in a distant future. One of the main characters, Chi-Bonnee, is a young man who does not heed the warning of his friend. He is shown as being very talkative, which leads the reader to conclude that he talks more than he listens. This is confirmed when his friend tries to warn him against eating the food that they find. However, Chi-Bonnee does not listen to him or take him seriously. This characterizes Chi-Bonnee as being very irresponsible, which leads to the tragedy that befalls him.

Overall, reading MOONSHOT: THE INDIGENOUS COMICS COLLECTION Vol. 1 was a wonderful experience. The art is lovely, unique, and reflects the events of each story. The stories have many different settings; these settings include the past, present, and future, as well as on Earth or off Earth. Some were sci-fi retellings, and some were more traditional. All of them, however, were thoroughly enjoyable.