Fans of Marvel’s MOON GIRL AND DEVIL DINOSAUR have been treated to some of the most charming and unique superheroes around. The adventures contained within each volume have been entertaining, albeit standard, fare, relying more on the likability of the cast of characters. Amy Reeder and Brandon Montclare have also done a great job with keeping these two characters contained in the same universe as the Avengers, while also allowing them to evolve in their own unique way. Starting right from where issue #12 left off, MOON GIRL AND DEVIL DINOSAUR #13 is a promising start to the titular heroes’ next adventure.

The last we saw of Lunella Lafayette (a.k.a. Moon Girl) and her adorably frightening best friend, Devil Dinosaur, she passed Hulk’s Banner B.O.X. – a puzzle that is supposed to be unsolvable. This led to a rather impressive conclusion – Lunella is the most intelligent person in the world. This revelation ultimately lays the foundation for the events in issue #13, which makes the issue feel more like a taste of what’s to come. 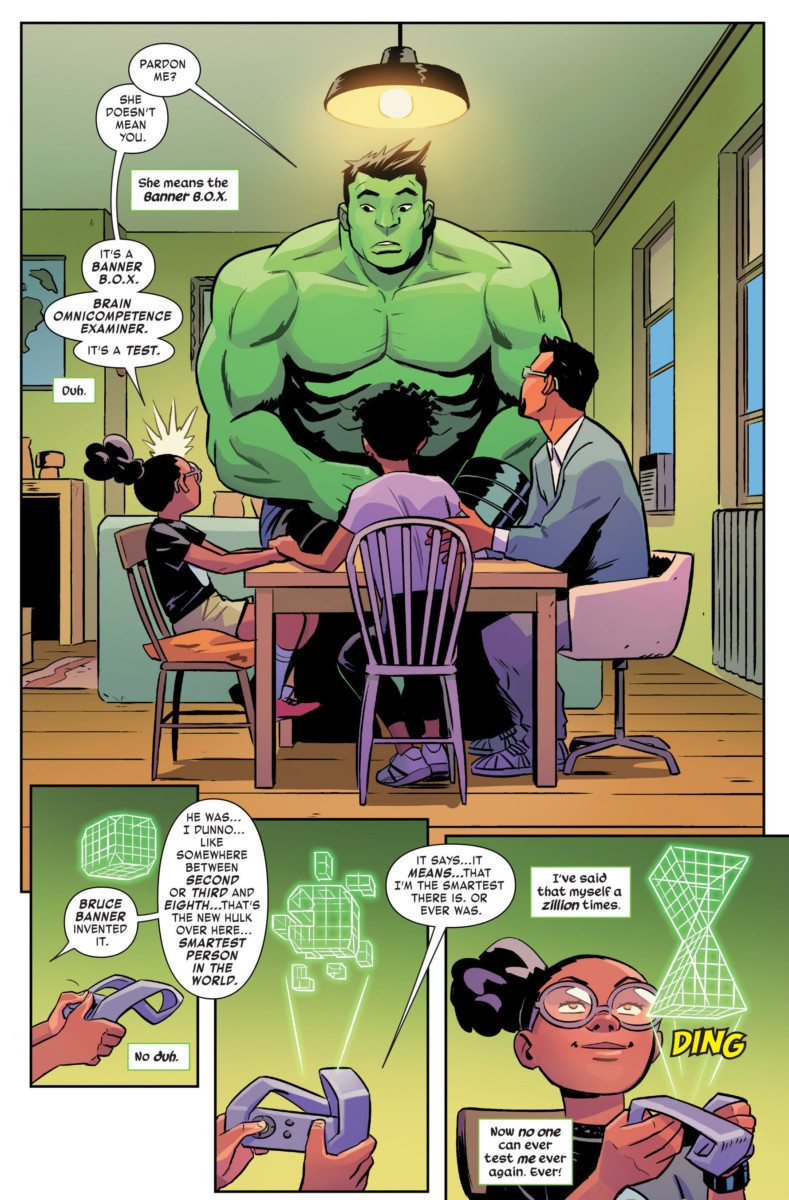 MOON GIRL AND DEVIL DINOSAUR #13 also briefly addresses the bizarre dilemma we saw in volume 2 where Lunella and Devil Dinosaur’s minds would randomly trade places, resulting in a blend of drama and humor. By doing so, it presents us with a dream sequence that instantly got me excited for the future of these characters. It’s not a tremendous spoiler, but I don’t want to say much more about it since Marvel fans will definitely get a kick out of it.

Other than that, there’s not much else in terms of plot here. Lunella goes about spending her time in the lab, going to school, and casually saving the day alongside Devil Dinosaur and Hulk at the very beginning. As mentioned before, however, MOON GIRL AND DEVIL DINOSAUR is at its strongest when it focuses on the charm of its cast of characters and slowly adds layers to the world around them. This is issue #13’s strongest quality, as it adds more depth to characters such as Hulk and Lunella and suggests that even more exciting characters are about to enter the mix.

Lunella is a compelling character for a number of reasons. While the idea of a preteen genius may ring a bell for Jimmy Neutron fans, her character very clearly changes over time in believable ways. Themes of puberty and growing up have been present throughout the comics, evoking memories for those who understand how confusing and scary of a transformation it can be. For instance, a recurring issue in volume 1 was her fear of the Terrigen Mist plaguing New York City. She knew that exposure to the Mist would trigger the inhuman gene within her, causing her to undergo a physical transformation. This concept of repressing one’s inner self from the outside world is universal and makes the superhero drama and human drama equally gripping.

In MOON GIRL AND DEVIL DINOSAUR #13, we see her change in a new and significant way: by knowing she’s the smartest person in the world, she develops an even bigger ego. This may come off as annoying at first, but it seems like a logical mindset for a child with intelligence such as hers. However, this ego develops into a form of existential dread as she questions her place in the world. It’s a more mature frame of thinking for someone her age, but it makes sense because she is not like other kids. Considering her age, this line of questioning makes it impossible not to wonder what kind of superhero she’ll grow up to be. 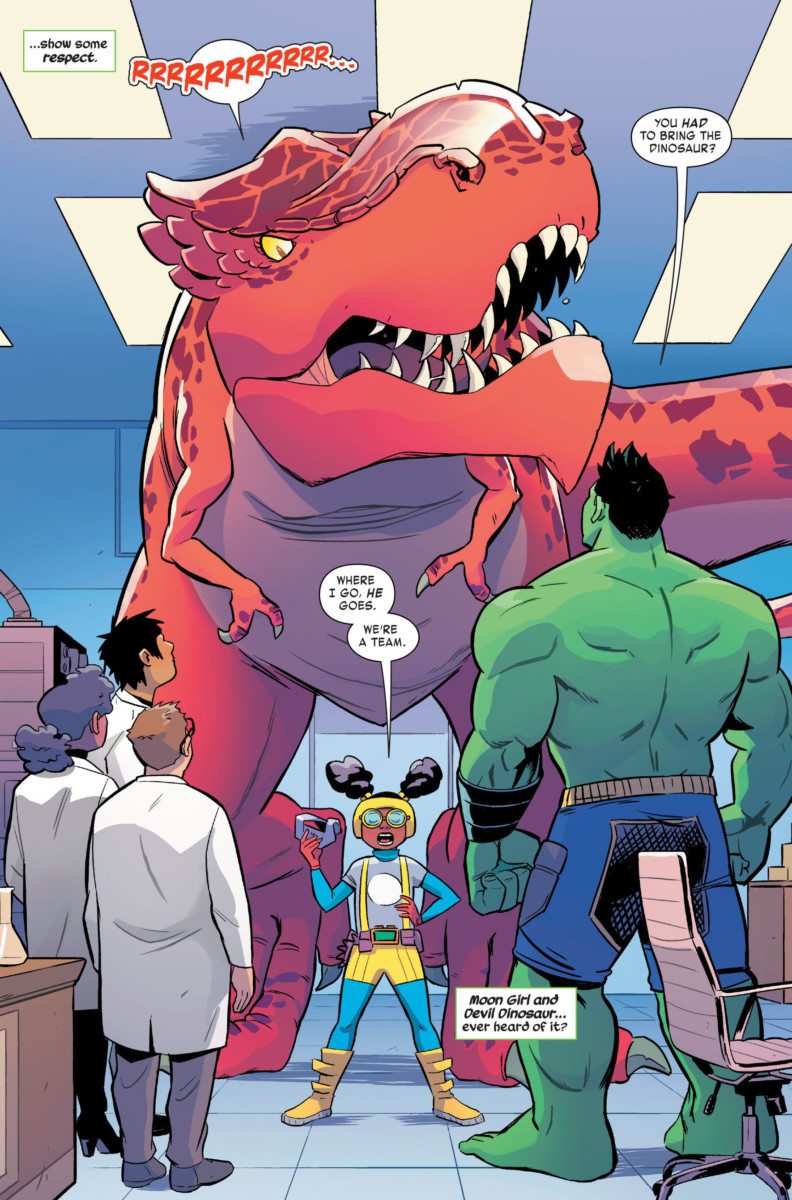 This internal conflict allows us to spend more time with Lunella and to understand how she truly feels. Through learning about her dilemmas, we are also able to get a better understanding of supporting characters as well. In just a few issues, Hulk has changed quite a bit since his first appearance in the series. First starting off as a joke machine/local celebrity, he’s been given a more human element now. Lunella’s relationship with him is still very entertaining, as it was from the beginning, and brings up an interesting question about superheroes: is violence the only way to save the world? In addition, his character is just now coming to terms with her intelligence and genuinely displays his willingness to help her fulfill her potential.

Artist Natacha Bustos does a great job at never making the reader feel overwhelmed with action. The artwork has a traditional feel to it, which complements the old-school approach to storytelling. As usual, Devil Dinosaur particularly stands out as terrifically portrayed. There’s a lovable appearance to his character despite the fact that he’s a creature with the potential to cause tremendous amounts of destruction. While the simplicity of the art may not be everyone’s cup of tea, it successfully illustrates both action and emotion equally well.

READ: New to MOON GIRL AND DEVIL DINOSAUR? Read our review of the very first issue!

MOON GIRL AND DEVIL DINOSAUR #13 is a solid first entry in the third volume, allowing the reader to spend ample time with the characters. In addition, the set-up for future events has left me curious but not quite confident as to what exactly is going to happen. I hope that this doesn’t prevent volume 3 from telling a compelling self-contained story, but I have a feeling that it’s going to be a very fun ride regardless.