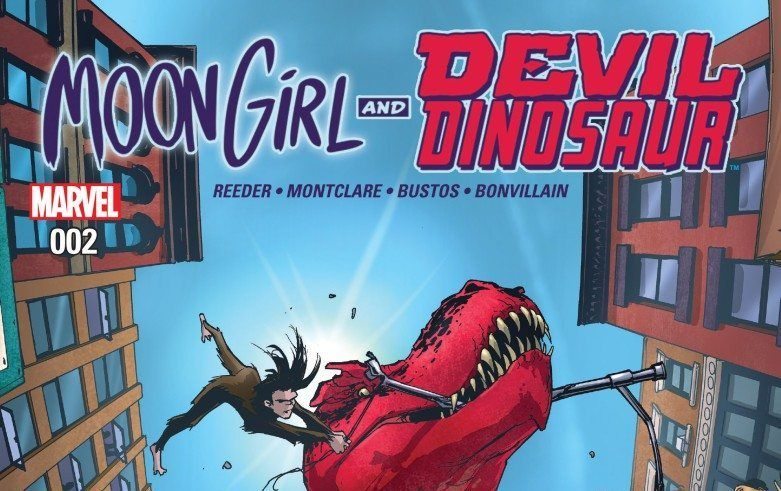 MOON GIRL AND DEVIL DINOSAUR is finally back in its second installment. This time around we have got more dinosaur participation and more problems. How will Lunella subdue the savage beast? Let’s find out!

READ: Behind on MOON GIRL AND DEVIL DINOSAUR? Read our review of the amazing first issue here!

The issue begins right where the last one left off with Lunella, also know as Moon Girl, being carried above the city by Devil Dinosaur. The Dino is going crazy and terrorizing the city, so Lunella uses that fantastic brain of hers to move the fight away from the cops and people. While doing so, she also gives us a little bit more of her backstory, particularly that she has Inhuman genes in her body that she is working tirelessly to fight off. On the other side of town, the Killer Folk, who also came through the time rift with Devil Dinosaur, are wreaking havoc on the hipsters and young professionals of the subway while they search for Moon Girl, Devil Dinosaur, and the Omni-Wave Projector. 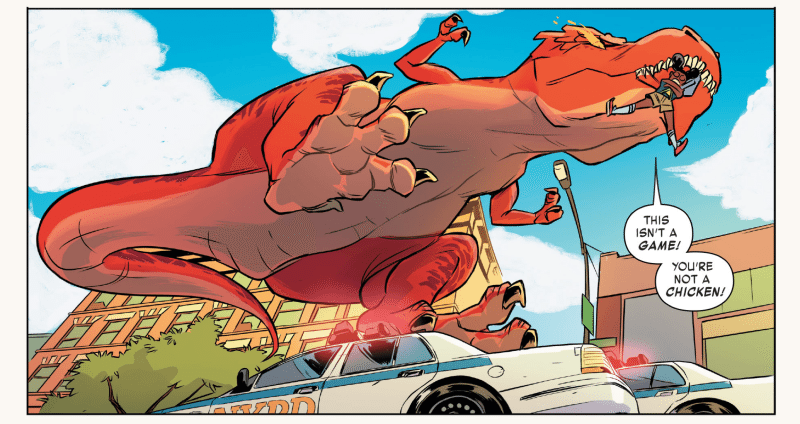 WATCH: Want an inside scoop on Amy Reeder and Brandon Montclare? Watch our interview with them this year at NYC: Special Edition!

I think that I enjoyed this issue more than the first, which is impressive considering how enchanted I was especially by Lunella and her depiction initially. I think I can attribute this to the real introduction of Devil Dinosaur. He was introduced in the first issue, much like Lunella, but he wasn’t given the same amount of page time to establish what he kind of dinosaur he was (I can’t believe I just wrote that sentence). Lunella got to do this when she told us about her views on learning and school, but Devil Dinosaur wasn’t given the same chance. However, in this issue, Devil Dinosaur gets to show off his personality. He is quick to anger while also being a cute little puppy. Of course, while a dinosaur that acts all scary but then reverts to puppy like behavior is not something new, it doesn’t come off as cliche in this instance. Mostly because of the strength of Reeder’s and Montclare’s writing in conjunction with Bustos’ art. It is not necessarily cartoonish or over the top. It is just enough to show you that this is a huge, awesome dinosaur while also emphasizing that this is still an animal who is easily distracted by shiny things. 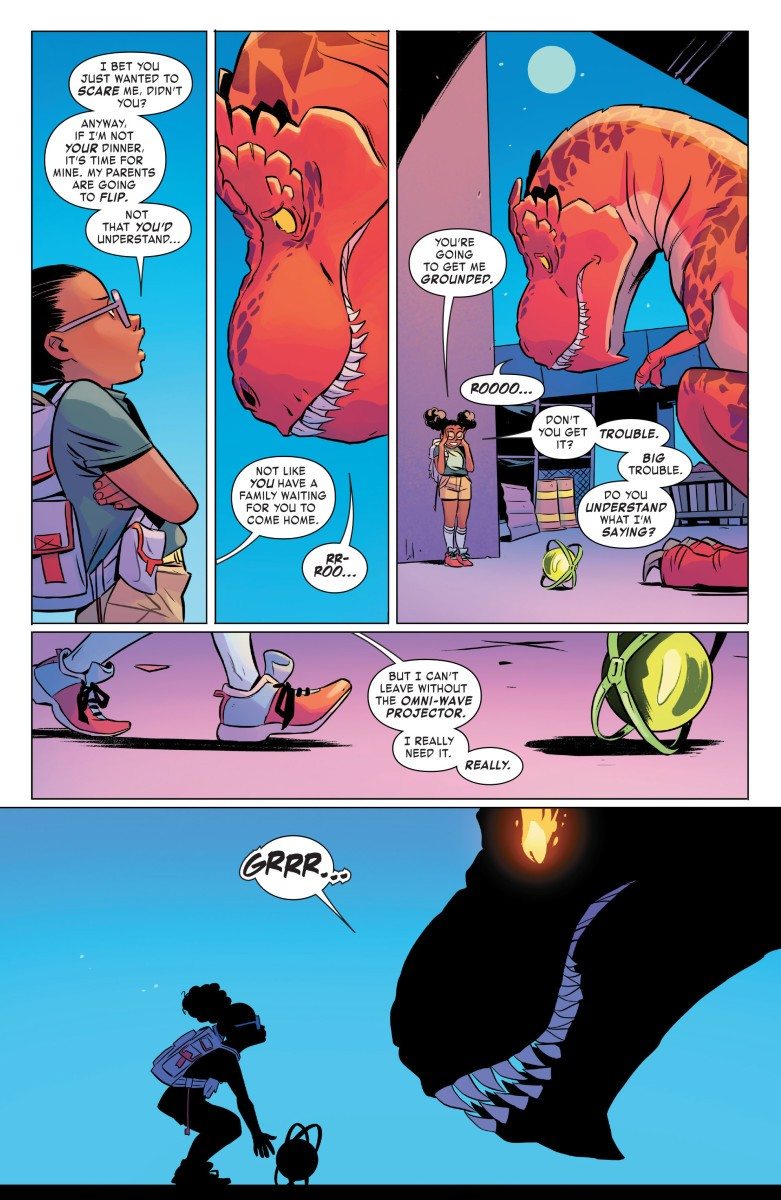 The page above perfectly illustrates the concept I was talking about, which could be incredibly played out, but the combination of the dialogue and the art makes this page just a telling and fascinating moment. The panel begins, of course, with what we as readers have come to understand as typical Lunella. She’s the boss. She’s over it. She’s late, and she’s almost talking more to herself than Devil Dinosuar. She defensive and upset, as can be seen by her body language, but when we cut to the next panel of Devil Dinosaur, the way that his eyes are, it almost seems like he does understand her correctly. They have some connection, and her statement about family actually seems to make him long for his family. Also, in the next panel, we get to see them next to each other, and it is clear that he has scrunched down to get closer to Lunella. He is minding her. However, when she walks over to talk the Omni-Wave Projector, it is no longer a night illuminated by a beautiful soft flame. It is not Lunella and Devil Dinosaur anymore. It is a dangerous interaction between a young human being and a dinosaur, which is made painfully clear by the way the lighting completely changes. This is not the typical dichotomy, in fact, the animosity between Lunella and Devil Dinosaur in that final scene reminds me more of the dynamic between Pi and Richard Parker, the tiger, in LIFE OF PI. The emphasis here is just how big he is and how a dinosaur could honestly just rip her to shreds. 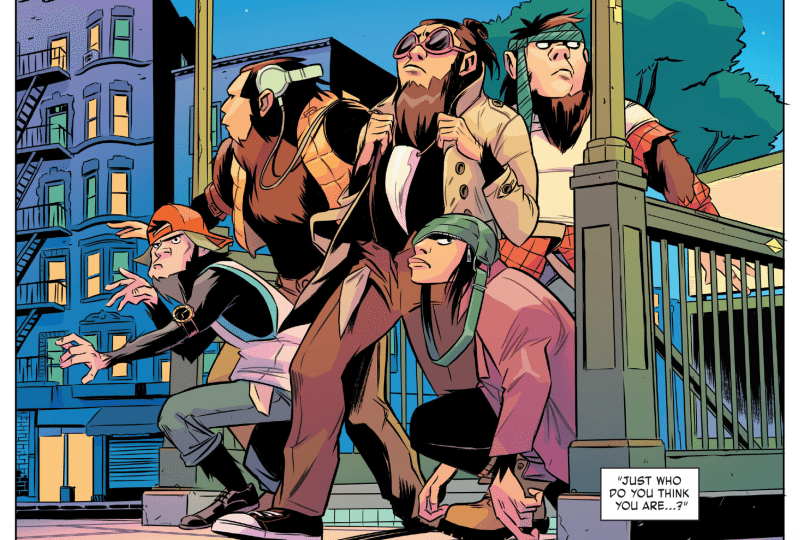 However, the dichotomy between fun and danger is not just on display in this panel, the entire first half of this comic is just pure fun from start to finish. Lunella is simultaneously in charge and vulnerable, and it makes for a very fun chase/mad dash through the city. In addition, it was very fun to get a glimpse of the Killer Folk in clothes that they stole off of New Yorkers from the subway. It was also generally fun to watch them learn the customs and language of 21st-century America as well. Mainly because they were watching people buy things, it was fun to see that this translated into the Killer Folk learning absolutely no manners. While the commentary might not have been spot on or fresh, it was still a nice little touch. Much like their outfits that were a total hoot!

READ: Looking to read something new? Check out our interview with David Tischman, the creator of an all-new web comic called HEROINE CHIC!

Overall, this issue lived up to the promise of the first issue and improved upon it by giving us a good idea of who Devil Dinosaur is, a super fun dinosaur on the run that you should not mess with unless you’re Lunella because she’s totally got everything under control.