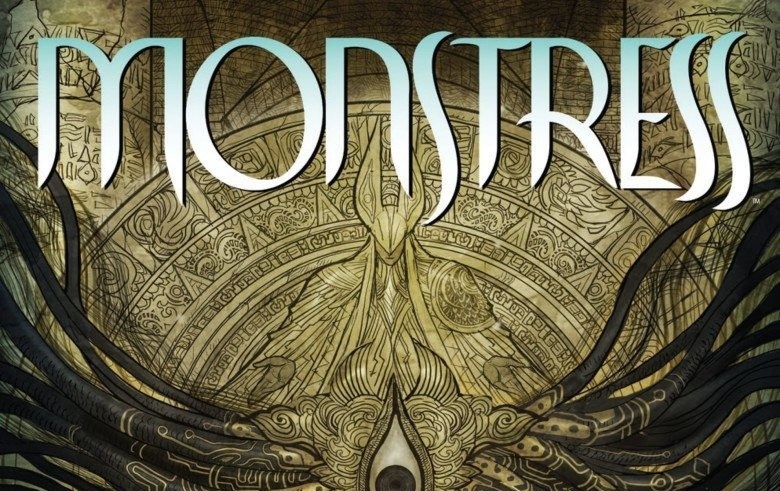 Marjorie Liu and Sana Takeda’s MONSTRESS has been catching the attention of comic book readers everywhere this year and lives up to its hype in issue #4!

MONSTRESS is fairly new to the comic book world, and I’ve only picked up the book recently. Many friends have suggested it to me based on what it offers. It showcases lovely and intricate artwork in the books, as well as telling a fantasy story with a strong female cast. It took me some time, but now I know why everyone’s been so stoked on it!

In prior issues, we became familiar with the Federation of Man and Arcanics, two different groups that are divided from the aftermath of the war in Constantine. What you need to know though, is Cumeans harness lilium, an extremely powerful substance that has been derived by the Arcanics.  The most recent issue gives readers a little more background on these government structures present in the story, and maintains its mystery regardless of the details Liu reveals.

LISTEN: Hear the ladies of Comicsverse talk about MONSTRESS!

The opening page introduces us to Alia, a warlord and Arcanic, as she rides over to the Dusk Court. There, we also meet The Queen of Wolves, and get a better understanding of what the world of Arcanics look like compared to the Cumaens and Federation of Man. Alia and The Queen of Wolves seem to face a disagreement on actions to take for protecting their fellow Arcanics and their resources of lilium and weapons. Opening up the world of Arcanics for readers assists in our knowledge of the consequences of the explosion of Constantine. It also broadens the perspective of other parties in this story that are essential to the progression of the story, briefing us on a history lesson to understand Zamora more. 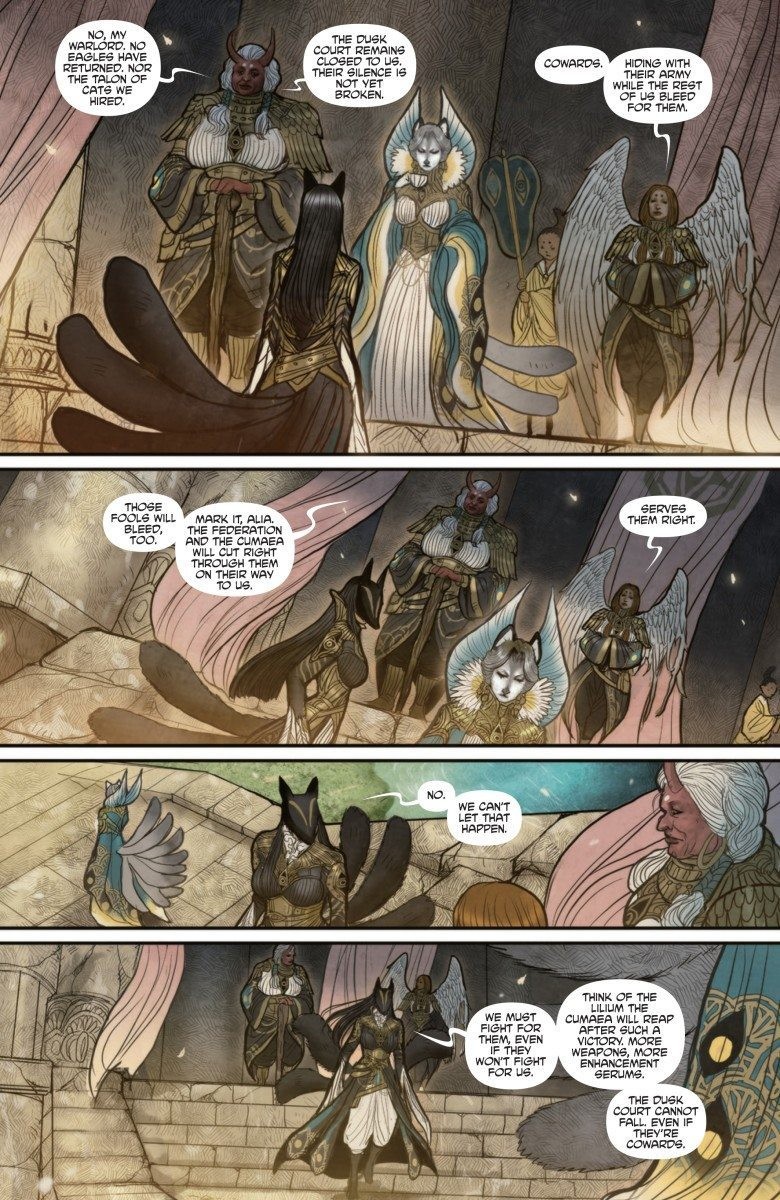 We are also reunited with our protagonist, Maika, and become a witness to her struggle with the monster inside of her. Since her bond to the mask, Maika finds herself dealing with the strife of controlling this new, godlike power living within and doing her best to restrain this monster from wreaking havoc. The conflict she faces is one we start to question and wonder: is she scared of the monster or scared of herself?

The story becomes more cutthroat with each issue and takes no prisoners, balancing its action and raw violence with a heavy detailed storyline. MONSTRESS depends on the details of characters like Maika and the supporting cast in order to set up the big reveal later. Not only are their individual storylines vital to setting the tone of the series, but also in keeping readers on their feet. Liu’s writing is full of suspense and leaves us in the dark to the bigger picture in the story. Doing this aids in focusing our attention to who our characters really are, and what conflict they really are facing internally in the midst of all the external chaos.

READ: If you’re new to MONSTRESS, check out the review on issue #1!

Maika might just be seeking vengeance for her mother all this time, but she is also a teenage girl developing into womanhood. The problems she encounters from being an Arcanic hybrid play a role into her character’s progression and contrast from many of the women we meet in the story. We find a lot of women of power who reign, fight, educate, and lead to advance their world, whereas, Maika is in a different position. Seeing her perspective, we learn that she is just trying to find answers about herself based on the past,  yet also learning to find answers within herself to save her future. Whether it be a monster attempting to use her body as a host, or a sense of control over her powers and emotions, we await her growth in the upcoming books. 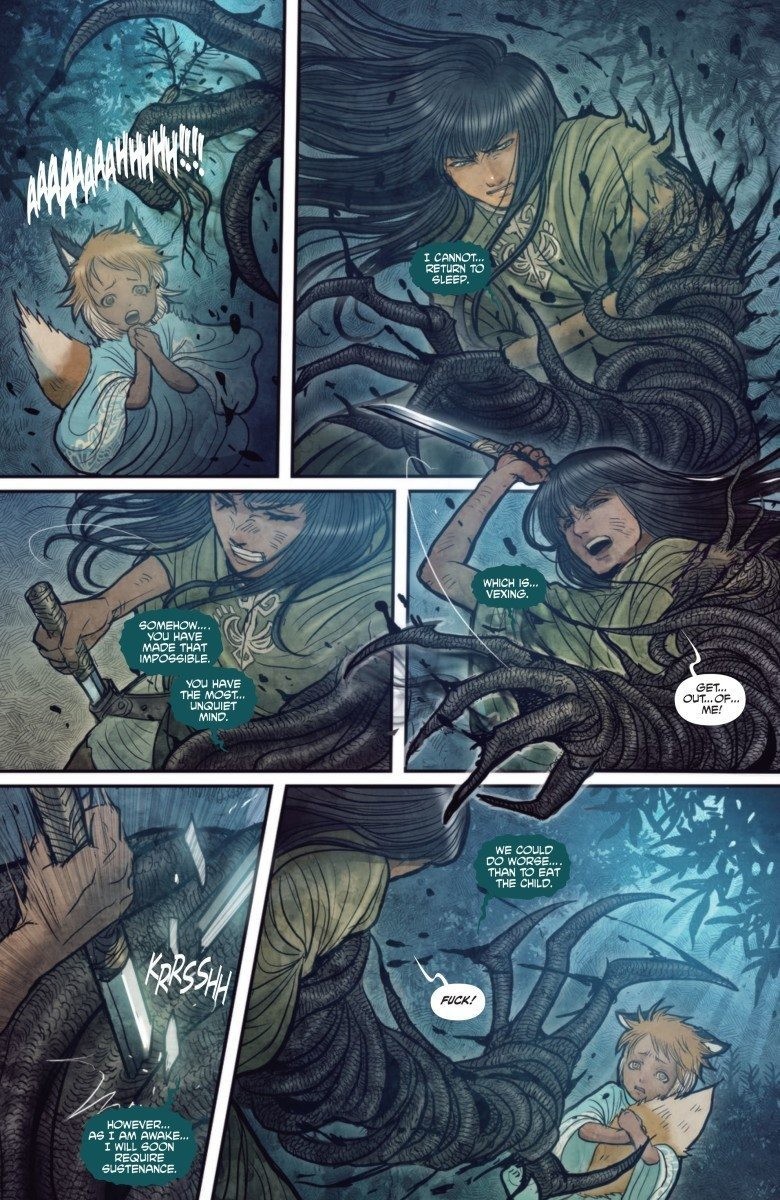 Takeda’s art fits the conflict and tone of the story, and remains consistent throughout the issue. For an emotionally driven and character-focused series, her balance of meticulous and careful details with watercolor-like colors sets a dark but hopeful mood within the panels. The use of textures in the background make the pages feel more like fine art pieces and abstract, in comparison to what we see in other comic books. There’s something about texture that not only adds a feel to the pages, but feels like something more tangible in the writing.

If you’ve been taken captive and are in awe of the story so far, I highly recommend grabbing #4 when you can. For anyone interested in the story, just like I was prior to this review, pick it up and become immersed.