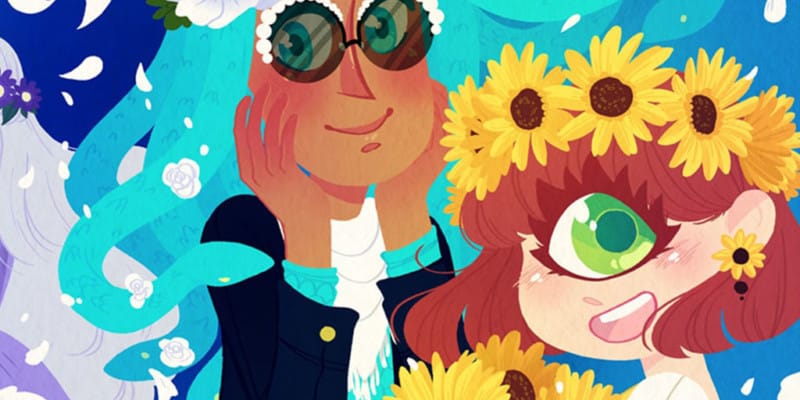 As demand for queer-friendly media has risen, we’ve been seeing more and more LGBTQIA+ characters in central roles. Certainly, creators have done a lot of hard work in developing gay and lesbian characters with nuanced arcs and admirable qualities. I mean, MOONLIGHT just won Best Picture, and even children’s cartoons like STEVEN UNIVERSE have a whole lotta gay going on.

However, the further down the LGBTQIA+ acronym you go, the less positive representation you find. Even just among bisexuals, things are still…not great. Either bi characters get to be the dirty cheating horndog stereotype that has plagued our community for decades (see: Oberyn from GAME OF THRONES). Or the writers mention that the character is bi purely as a way to make them Spicy™ and then never go anywhere with it (see: Ramona Flowers from SCOTT PILGRIM).

Reflecting on this, I suppose that there are some good reasons why creators struggle so much with writing bisexual characters. After all, you can usually establish a number of different character traits or identities in a single scene. However, try setting up a character as bi in one scene without making them look super flirty. You can see the problem here.

READ: Writers are scared to even say the word “bi.” Take a look at how this impacts ORANGE IS THE NEW BLACK!

Nevertheless, there are a few rare bisexual gems in media that prove you totally can successfully write bi characters. One such example is Genevieve “George” Tinsley, protagonist of Maya Kern’s webcomic MONSTERPOP. George is a college-age Cyclops who lives in a world where humans and monsters have built an uneasy coexistence.

The series follows George and friends as they balance typical college drama with their marginalization as monsters. Most of the cast is queer and POC, allowing for many interesting intersections between real-world identities and the fictitious experiences of monsters. For George, bisexuality is plot-relevant and important thematically to her life as a Cyclops. Let’s take a closer look at how MONSTERPOP writes George as a bi character. 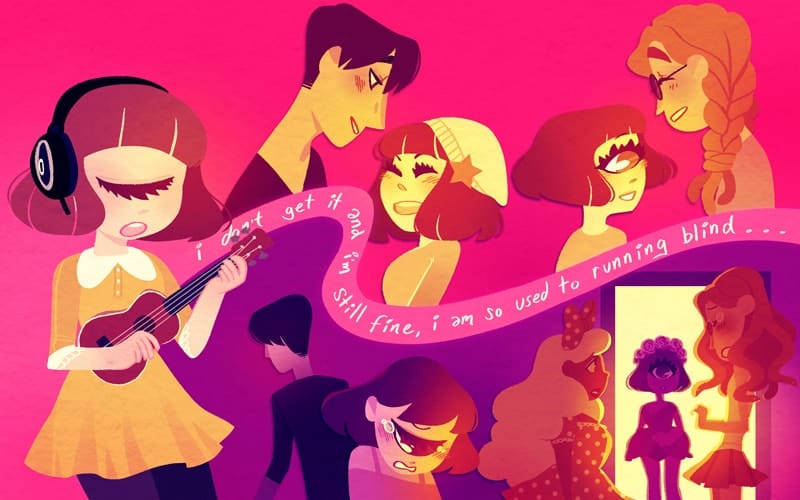 The first chapter of MONSTERPOP takes place before college begins. In order to sneak into a human party, George’s BFF Franny lends George a magic hat that makes her face look more human. While there, George develops a huge crush on a human guy named Ben who turns out to be prejudiced against monsters. Despite all warnings, George decides to keep seeing this guy, concealing her identity while he says progressively worse and worse stuff. At one point, the hat falls off, revealing George as a Cyclops. Ben curses her out, and George decides he was never worth her time. Afterward, she reunites with her friend to get ice cream and some monsterly solidarity.

Later in the story, after college has begun, George falls head over heads for a nerdy Medusa chick named Marina. The two become close friends with a lot of mutual respect. However, when George learns at a Halloween party that her crush is unreciprocated, she lashes out at her friend and decides she’s not good enough for Marina. After a lot of soul-searching, George accepts that a friendship with Marina is still valuable and goes back to apologize. 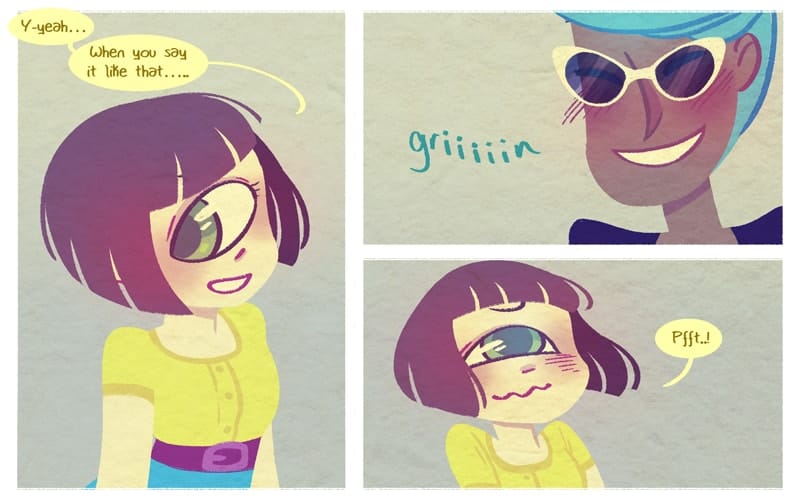 Meanwhile, human jerk Ben re-emerges in George’s life after a separate incident causes him to finally befriend a monster who attends her college. George blushes whenever she sees him but is still (understandably) angry about her prior incident with him. He has yet to earn her trust back, but there is definitely potential for a rekindled romance or friendship there.

What’s interesting here is that George’s attraction to different genders is episodic and time-based, rather than all at once. While crushing on Ben the first time, her full attention is on him. And though Ben comes back while George is still sorting out her feelings for Marina, her attraction to Ben definitely does not overshadow the much bigger Marina romance arc. In this way, the story establishes George as bisexual in a way that allows her the potential for committed long-term relationships with multiple genders. 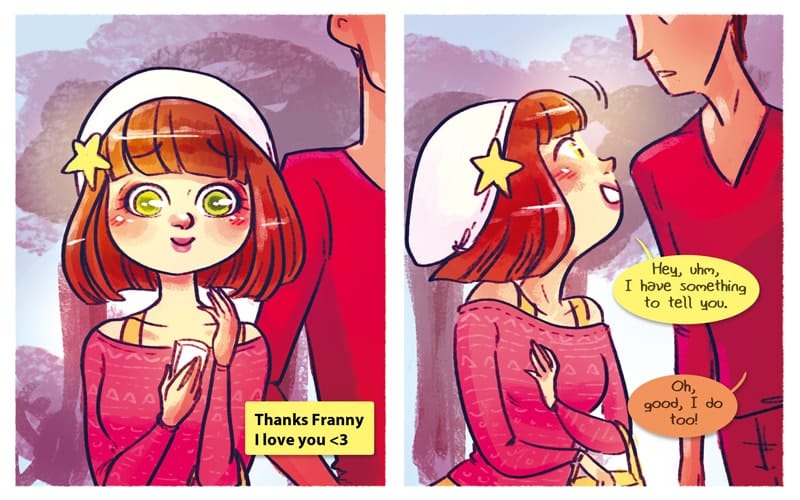 This is a vast departure from the usual bi establishing moment where “Token Bi Character” will flirt with like ten million people at one party. Not that there’s anything wrong with being flirtatious. However, when this image gets repeated constantly, it has an impact – and we start getting a rep for insatiable lust. To this day, queer dating apps like HER still have people posting long monologues about how “All bi women will cheat on you with a man someday, so never trust them!!”

READ: Here are some ways Mary Cox of THE PATH counters the “bad bisexual” stereotype!

A character like George counters this generalization because we see her go through extended periods of time where she’s mostly focused on one person. There’s never a danger that she would cheat on either of her crushes. Plus, since MONSTERPOP spends sufficient time on each crush, it establishes that George genuinely values her relationships with women, which shatters the idea that all bi chicks are inevitably going to run off with some guy.

Another important aspect in the way George’s sexuality is written is that differently gendered romances have different impacts on her character. For instance, her interest in Ben is assumed by both parties to be romantic in nature from the start. While dating this human man, George ends up hiding parts of herself to fit into his idea of what a normal relationship looks like. 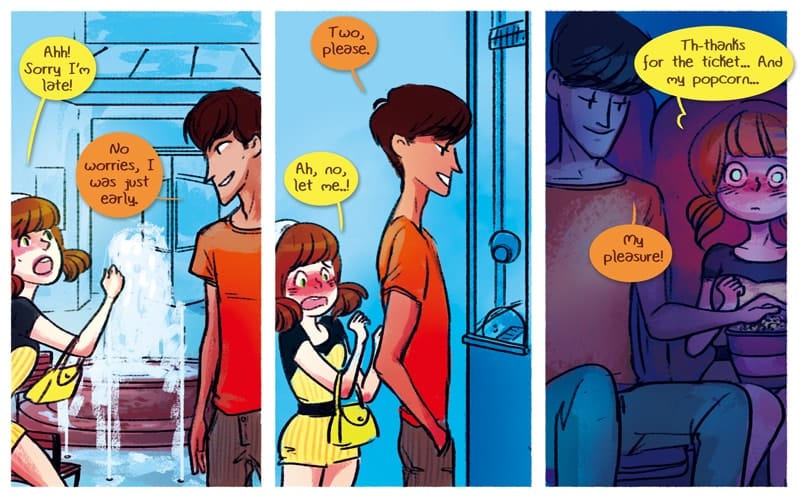 George alters her physical appearance for him, stays quiet to listen to his completely irrelevant opinions. All of her own experiences and nuanced understandings of the world get thrown out the window as George tries to become the smiling, silent, supportive girlfriend that the hetero world idealizes. However, despite being able to blend in with Ben’s world on a surface level, George is still a monster and always will be.

Even after breaking things off with Ben, George and her friends are still a bit shaken from what has happened. For instance, Franny makes sure to find out quickly whether a human guy she is crushing on is monster-friendly. And George easily bonds with Marina after she admits to still being scared of humans.

In contrast with the Ben episode, George’s relationship with Marina starts out with a solid foundation of friendship. However, there is little assumption from other characters that anything will grow from there. With this fellow monster woman, George can freely be herself, but approaching the topic of romance becomes way more convoluted. 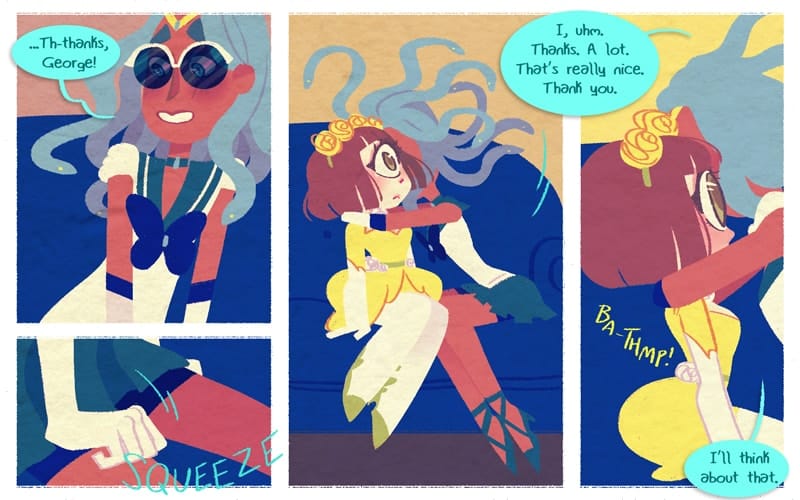 Still, this foundation of respect allows George the ability to stand up for herself repeatedly when running into Ben again. Plus, this self-respect might allow for a much stronger bond between George and Ben than what they had before Marina. 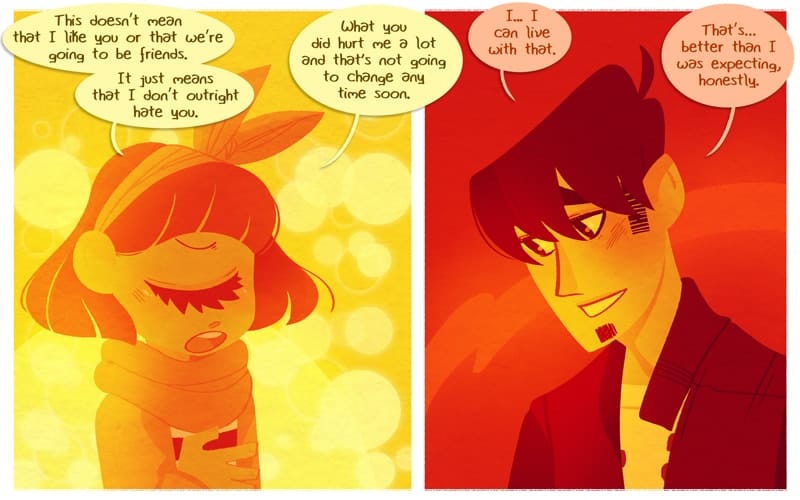 In this sense, George’s uniquely bisexual experiences actively shape her growth as a character. Her sexual orientation becomes its own thing, rather than just straight-with-a-sexy-phase or gay-but-won’t-admit-it. This way, George’s bisexuality feels way more realistic, since it follows the real lived experiences of bisexuals, who struggle to be their whole selves in two clashing worlds.

In MONSTERPOP, bisexuality is not a problem George must solve. Instead, bisexuality is an epic journey that George gets to embark on – and us, the readers, with her. What could be cooler?

Check out MONSTERPOP at ww.monsterpop.mayakern.com and look for updates through Maya Kern’s blog. Update schedule is sporadic as Kern’s arm heals.