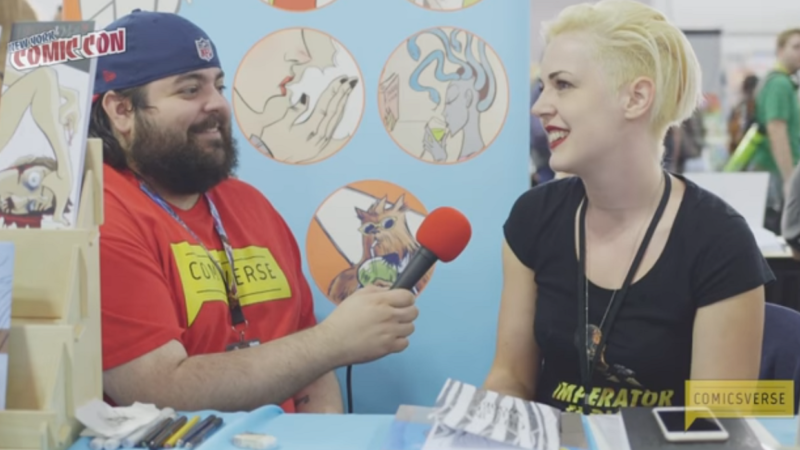 After interviewing Monica Gallagher last year at New York Comic Con, ComicsVerse got the chance to talk to the indie comic creator again at the convention this past October. Last time, Monica caught us up on her autobiographical comic BOOBAGE; this time, she fills us in on what she’s been up to since.

WATCH: Here’s our interview at NYCC 2015 with lots of BOOBAGE!

READ: We picked our favorite indie comics of 2016!

In addition, another one of Monica’s comics released since we last spoke is OUT IN THESE WOODS, a mini autobiographical comic about horror movies. Monica is a frequent creator of autobiographical works, and she was more than willing to give us a look into what it’s like to tell these stories in the comics medium. She also gives us insight into the process of compiling short strips into a larger collection, as well as the differences between writing webcomics and longform comics. Her eclectic art style draws in lots of requests for sketches, and to round off our interview, Monica divulges a weirdly specific request she had gotten from a fan.

Everything you need to know about Monica Gallagher is at www.eatyourlipstick.com, where you’ll find her webcomics, links to her store, her Patreon, and more. You can also keep up with Monica on her Twitter, @eatyourlipstick.