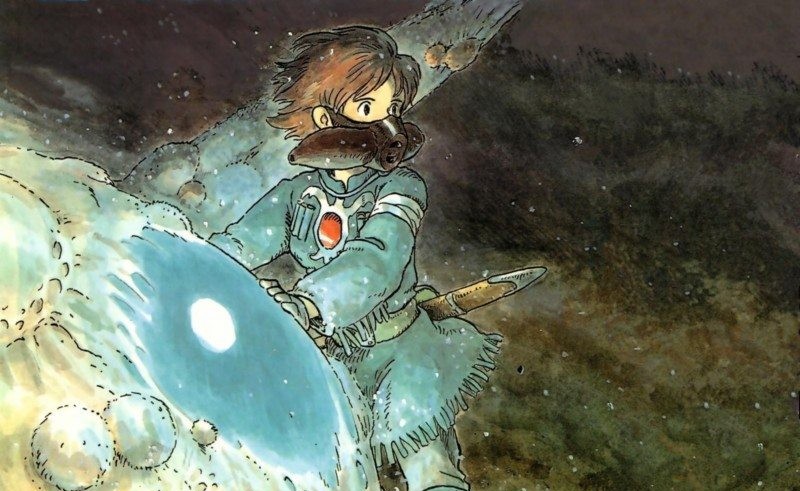 By now, the world is well-aware of the name “Hayao Miyazaki,” or at least the name “Studio Ghibli.” Miyazaki is one of the co-founders of Studio Ghibli, the famous Japanese film and animation studio that has put out success after success since its start back in 1985. Miyazaki is also the most prolific director/writer in the company, directing thirteen of the studio’s twenty feature films. So, to clarify, not every Studio Ghibli film is a Miyazaki movie. For example, the Ghibli film GRAVE OF THE FIREFLIES was written and produced by Isao Takahata.

So, what makes a Miyazaki movie different from a Studio Ghibli one? Essentially, its feminist elements. The themes in Miyazaki’s movies are consistent with his beliefs in life. In a NAUSICAÄ DVD feature, Toshio Suzuki, the president of Studio Ghibli says, “Miyazaki is a feminist, actually. He has this conviction that to be successful, companies have to make it possible for their female employees to succeed too. You can see this attitude in PRINCESS MONONOKE. All characters working the bellows in the iron works are women. Then there’s PORCO ROSSO. Porco’s plane is rebuilt entirely by women.”

Miyazaki has often been called the “Walt Disney” of Japan. However, unlike Disney, Miyazaki has always been able to put nuanced feminist themes in his work, and stand by them. Let’s take a critical look at three of his most iconic films, and see how they compete in the box office with the more lighthearted Disney classics!

READ: Why victimizing women is not a good method of character development!

NAUSICAÄ OF THE VALLEY OF THE WIND

Meet the movie that started it all: NAUSICAÄ OF THE VALLEY OF THE WIND. This is the original Miyazaki movie that helped found Studio Ghibli in the first place. The story is about a young princess named Nausicaä attempting to defend her homeland, the Valley of the Wind, and a jungle of mutant insects from the kingdom of Tolmekia. She also has to cooperate with the Kingdom of Pejite to prevent an all-out war with Tolmekia. Unlike your traditional Disney princess, Nausicaä has little time to focus on herself. She faces very real consequences as the head of a kingdom.

She has to exercise diplomacy between the Valley, Tolmekia, and Pejite, who are clashing over an ancient weapon of mass destruction. The weapon is a warrior embryo from the Seven Days of Fire: a war that obliterated civilization and gave birth to the toxic jungle of mutant insects. After stealing the weapon from Pejite, Tolmekia wants to revive it and use it to destroy the toxic jungle that is beginning to infect the surrounding countries. However, from her own research, Nausicaä knows that the jungle itself is not toxic, the soil that has only been tainted by mankind. The forest actually is working to break down the toxins in the soil, and the mutated insects exist to protect that process.

In a nutshell, Nausicaä faces death, war, and deforestation, and uses her skills as a diplomat and scientist to resolve the issues she, and her people, face. Furthermore, Miyazaki does not concern her with trivial romance in the story. She builds a strong friendship with the Prince of Pejite and shares her scientific discovery to encourage him, as a fellow leader, to protect the forest and insects. Romantic love is not what reigns here. Instead, her love for her people, her country, the environment, and pacifism are the championing elements of this film.

This 1997 film follows closely in NAUSICAÄ’s footsteps. PRINCESS MONONOKE initially follows the male protagonist Ashitaka, who is fatally cursed by a fallen boar-god while protecting his village. His journey mirrors Nausicaä’s thematically. He ends up caught between a struggle between nature and man, much like his female predecessor. While searching for a cure, he meets a woman named Lady Eboshi, the head of Irontown, a weapons-making village. She is the film’s main antagonist, cutting down the forest and “killing” gods of nature, like the boar-god that cursed Ashitaka. However, she is not a heartless villain. Her town is a refuge for former brothel-workers, lepers, and social outcasts. Her aim is to kill the main forest spirit and deliver his head to the Emperor in return for protection. On the other hand, a young girl, self-dubbed Princess Mononoke, fights against Eboshi for the wolf goddess Moro, and the forest. She and Ashitaka develop a strong friendship, and are able to defend and restore the forest spirit to life in the end.

Even though Mononoke doesn’t seem to have a huge role in the film at first glance, the film still stands as a pinnacle of feminist storytelling. The main antagonist is a woman, but not because she is a woman. Her outlook on life speaks for her, not her gender. Also, as mentioned before, the iron workers and weaponsmakers are all women. Their ability to make weapons or to do physically taxing work is a given, not a question.

CLICK: Take a look at the combination of racism and sexism on the CW!

Once more, as proof of a female-centric film’s success, here are the numbers! PRINCESS MONONOKE was the highest grossing film in Japan, making a domestic total of $148 million! Also, despite an initially disappointing performance in America, the film’s DVDs sold much better worldwide, adding $11 million to the sales. This helped boost the studio’s popularity and influence outside of Japan. On Rotten Tomatoes, the film has a 92 percent critics approval rating, and a 94 percent audience approval rating, rivaling BEAUTY AND THE BEAST‘s respective 93 and 92.

This next movie is very different from the previous two. SPIRITED AWAY was inspired by the ten-year-old daughter of Miyazaki’s friend, and then appropriately aimed at a younger audience. The story starts with a young girl named Chihiro Ogino and her parents moving to their new home. Like many children who are uprooted at a young age, she is incredibly grumpy about the whole situation. On the way, her father makes a wrong turn, and the family ends up exploring a mystical space that spirits visit for leisure. Her parents get turned into pigs because of their trespassing, and she gets trapped in the spirit world.

A boy named Haku guides her through the strange world, and for the time being, tries to find her work in the bathhouse boiler room. Instead, the boiler man, Kamaji sends her to get a job at the main bathhouse under the witch Yubaba. After giving her a job, Yubaba changes Chihiro’s name to “Sen.” Again, Haku guides her through this, explaining that Yubaba controls people by taking their names. If she forgets her name like Haku forgot his, she will never be able to leave.

Throughout the film, Chihiro makes many friends, and becomes more confident in herself through her many successes. She and a coworker named Lin successfully bathe a polluted river spirit, earning the bathhouse a lot of money. Chihiro also discovers and breaks several curses put on Haku, and remembers him from her childhood, when he saved her from drowning in a river (because he was the river god). In the end, she also manages to reform Yubaba’s spoiled child, help the lonely no-face spirit, and finally save her parents.

SPIRITED AWAY is a feminist film, in short, because of Chihiro’s active role in her adventure. At first, she is helped a lot by Haku, but then, because of that encouragement, goes onto transform everyone’s lives through courage and love. Her relationship with Haku is also one of the most wonderful elements of the story. Yubaba’s twin, Zeniba, tells her that his curses are broken because of her “true love.” Keep in mind, Chihiro is a child, so this isn’t your classic Disney-type love. Miyazaki says it best: “I’ve become skeptical of the unwritten rule that just because a boy and girl appear in the same feature, a romance must ensue. Rather, I want to portray a slightly different relationship, one where the two mutually inspire each other to live – if I’m able to, then perhaps I’ll be closer to portraying a true expression of love.”

READ: The Pokémon Go hype is still real. Check out the mental health benefits of playing the game!

The film is also great because it doesn’t sexualize any of its female characters, nor does it demonize its female antagonists. Even though Yubaba is a shrewd, witchy business woman, she’s only protecting her assets. Plus, there’s no weird subtext on how old or arguably unattractive women are equated with villainy. Especially since, Zeniba, Yubaba’s identical twin sister, is the one who gives Chihiro her final burst of confidence. As Miyazaki says in the book, THE ART OF MIYAZAKI’S SPIRITED AWAY,  “the heroine [is] thrown into a place where the good and bad dwell together. […] She manages not because she has destroyed the ‘evil’, but because she has acquired the ability to survive.”

SPIRITED AWAY’s greatness was absolutely recognized. To this day, it is Japan’s highest grossing film of all time with a total of 30.4 billion yen! It beat out both PRINCESS MONONOKE and TITANIC’s performances in Japan, and won Academy Award for Best Animated Feature at the 75th Academy Awards. It is the only hand drawn animated film and Japanese animated film to win that award. If you were curious about it’s Rotten Tomatoes score, critics give it a 97 and audiences give it a 96!

I grew up on Miyazaki films like most girls grow up on Disney (although I watched Disney, too). My first Studio Ghibli film was actually KIKI’S DELIVERY SERVICE, and I dressed up as her for Halloween before I even knew what cosplay was. Even though I didn’t cover that movie in this article, I can say for certain that these themes are also imbued in the coming-of-age film. Media can define and mold how children see themselves, and what they value when they grow up. While Disney also makes films with great themes like friendship, kindness, and hope, many of its original stories reinforce stereotypes. For example, the idea that, for girls, romantic love is paramount. Let’s not even get into mainstream media in general.

These films by Miyazaki prove that there is no excuse for writers and directors to fear the success of female-centric, or at the very least female-balanced movies. Almost all of Ghibli’s films, even the ones not made by Miyazaki, have women or girls that are essential to the plot. The only real exception to that is TALES FROM EARTHSEA, which was poorly received in comparison to the studio’s other movies. In reality, it’s not that hard to create a feminist movie. When asked, “Why do you always choose a girl as your theme?” in an interview with KIKAN IICHIKO magazine, Miyazaki responded, “I don’t logically plan it that way… if a girl is walking gallantly, I feel ‘that’s cool.’ At first, I thought ‘this is no longer the era of men.’ But after ten years, I grew tired of saying that. I just say ’cause I like women.’ That has more reality.” So, take a note from the acclaimed Hayao Miyazaki: feminism sells.